That was what I yelled out when I sat in the 300 level at the United Center, the home of the Chicago Blackhawks, when Marian Hossa scored the game-winning goal against the Nashville Predators in game five of the 2010 Stanley Cup playoffs. After the game, some friends of mine drove down to Nashville to catch game six. I guess you can say that was the beginning of the end for the Predators ticket situation as they knew it.

The Nashville Predators want to ‘keep the red out’ apparently.  The team recently announced that they will not sell single tickets to the three home games involving the Blackhawks. Anyone who wants to purchase tickets to those games will now have to buy tickets for another game as well. This is clearly a ploy to stop Blackhawks fans from buying tickets for games in Nashville.  I hope they know that this won’t stop the scalpers or the ticket brokers. Those guys care more about green than they do about red.

Look at what I found on Stub Hub: 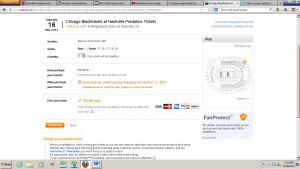 The Chicago Blackhawks are a force to be reckoned with.  Ask the Boston Bruins how a fast the tide can turn when playing those guys.  Blackhawks fans are just as intense. In recent seasons, the fans have developed a reputation for showing up in force for away games. In Chicago, we know a little bit about that. The fans of the Green Bay Packers, Detroit Tigers and the St. Louis Cardinals often do the same for games played in the Windy City.

Last year, I attended the Monday Night Football game between the Dallas Cowboys and the Chicago Bears. I was amazed to see that so many fellow Bear fans made the trip.  As the game started to get out of hand, we started to get more and more vocal. It was Soldier Field South.  I know for a fact that the local were not happy with us.

I can understand where the Nashville Predators are coming from. They would rather see their own fans up in the stands instead of the fans of the visitors. Even though the teams are going in different directions. But seriously, cut the crap. This stuff happens all the time in professional sports. The New York Yankees, Chicago Cubs, Detroit Red Wings and the Boston Red Sox to name few have fanbases that travel well. Some of those fans are transplants who come to see their hometown team. What’s wrong with that?

The team just drafted a player in Seth Jones who has the potential to become hockey’s first crossover African-American star player. Scouts say that Jones is the best blue line prospect to hit the National Hockey League since Chris Pronger. The fans in Nashville should come out for that alone.

Since Blackhawks fans seem to be too much for the locals to handle, what does that say about the fan base of the home team? If the fans from a visiting team buy tickets and make up a substantial part of the crowd, I really think there is nothing than can  be done to stop it from happening.

Instead of trying to control the amount of Blackhawks fans who show up in Nashville, maybe the team can create more buzz around the home team.

1 thought on ““Keep The Red Out” Only Delays The Inevitable”