In 1999, the NHL introduced the concept of an overtime loss.  Teams that made it through regulation would earn a point regardless of the outcome of the game.  The idea was to encourage teams to go for a win in overtime, though games could still end in a tie.  Interestingly, a study published in the Atlantic Economic Journal by Neil Longley and Swaminathan Sankaran established that the change actually resulted in more ties:

“For games that are tied in the late stages of regulation time, teams now have an incentive to defer any offensively aggressive strategies until overtime, where they are guaranteed one point even if they lose. This effect should manifest itself in more games being tied at the end of regulation time, causing more games to go to overtime, and partially negating the desired impact of the rule.”

That’s exactly what happened.   Ties increased as teams focused on just getting to overtime to earn a point.  The NHL would make another change just a few years later by getting rid of tie games altogether.

Coming out of the 2004-05 lockout, the league made a handful of tweaks – removal of the two-line pass, increasing the offensive zone, addition of the trapezoid, and , most significantly, the elimination of ties. Shootouts were introduced to decide games tied after five minutes of overtime.

Since the post-lockout introduction of shootouts in 2005-06, overtime games have been on the rise. Currently, one of every four games goes to overtime.  The last time teams played this much overtime, Mark Messier and Ron Francis were still playing in the NHL.  That was back in 2003-04. 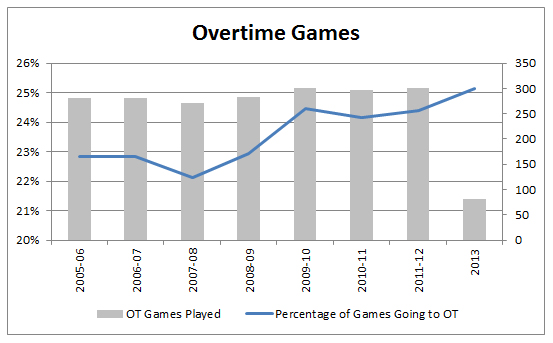 On average, teams earn around 20 points each season just from going to overtime. Of course, that’s an average. Some good teams avoid overtime in their success while some weak teams leverage it to their greatest advantage. In 2011-12, the Florida Panthers set a league-record 18 overtime losses on their way to winning the Southeast Division. Three teams that missed the playoffs had more wins than the Panthers. They won the division by simply playing not to lose. That’s not a system the NHL should be rewarding.

The NHL needs to change the standings to reward teams that win and stop giving points to teams who just managed to play an extra few minutes of hockey before losing. What’s the best approach?

Before you get up in arms, yes, we know that not all teams have played the same number of games and that teams with games in hand can finish higher in the standings. We’ll keep that in mind as we take a midseason look at a few scenarios.

We also know that coaches may employ different strategies under a different approach to standings, but come along for the ride anyway.

Additionally, we’re not going to entertain the thought of going back to ties. It’s something that the NHL obviously is not looking to do given the success – especially from a marketing standpoint – of the shootout.

If you feel strongly about rewarding lack of success, you might fall into the camp clamoring for three-point games. With three points at stake for each game, a team would earn all three for a regulation win. Overtime and shootout games would award two points to the victor and one to the loser. This approach puts more of a premium on regulation wins, which rewards the teams that actually play to win, instead of trying not to lose.

Steve Yzerman agrees on the importance of that approach. “”I just think a regulation win should be most important,” the Lightning GM told ESPN.  This system still gives a charitable handout to teams who managed to survive the first sixty minutes of action.

If that makes you feel better, great. Just know that it doesn’t solve anything.

In the East, the Penguins, Canadiens, and Hurricanes would still lead their respective divisions. As a matter of fact, there are no changes in the playoff-bound teams at all. The only move is from Pittsburgh, where they find themselves tied with Montreal for the conference lead. Aside from that, it’s no different than what we have under the current system. 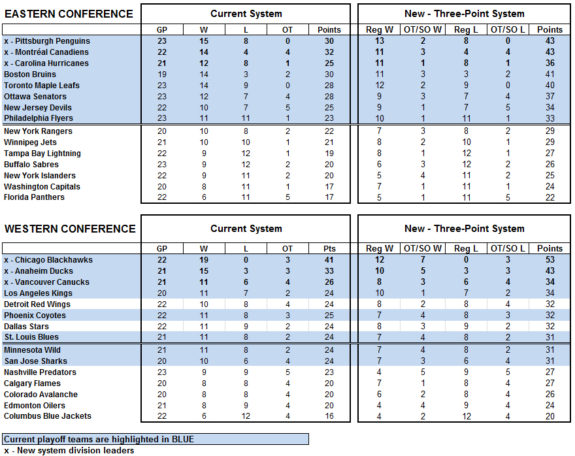 Out West, there’s a little more movement, but that’s the result of having six teams currently tied at 24 points. Like in the East, the division leaders – Chicago, Anaheim, and Vancouver – remain on top. Without the loser point, we have a little more differentiation in the lower-ranked teams. The Dallas Stars and Detroit Red Wings, currently outside of the playoff picture at 9th and 10th respectively, jump to the middle of the back. Detroit leaps up to fifth, two points away from the Kings in the battle for home ice advantage. The Stars remain one point up on the three-way-tie for the eight seed. At least that’s a little clearer than digging through tiebreaker rules for six different clubs to figure out who’s in and who’s out. The Wild and the Sharks, without the benefit of charity points for losing, fall out of the playoffs.

All the playoff teams would still be playoff teams, though the matchups would get shuffled around a bit. The Capitals would win the Southeast Division and become the three-seed. The Panthers would fall to ninth. The only change in the Western Conference happens at the top, where the St. Louis Blues would finish ahead of the Vancouver Canucks to claim their second President’s Trophy. Vancouver’s 15 overtime victories, now valued less than a regulation win, would not be enough for them to catch the Blues. 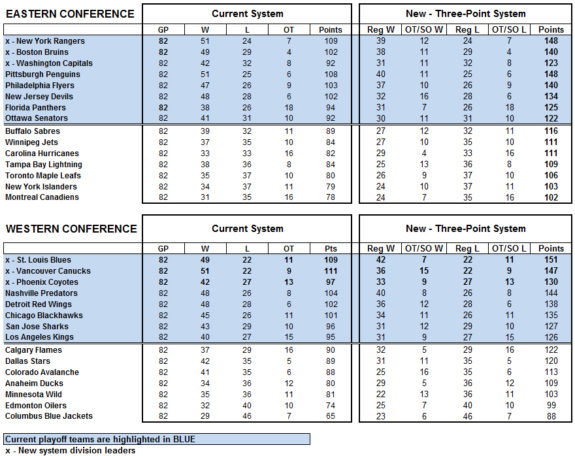 The three-point system isn’t perfect, but it is an improvement over what we have now. It allows for more differentiation based on a team’s ability to win, especially in regulation. After all, that’s why they play the games – to win, right? If so, why reward losing at all?

“Winning isn’t everything. It’s the only thing.” UCLA Head Coach Red Sanders coined that phrase long before Vince Lombardi delivered it.  Sanders and Lombardi were both smart men. Both were excellent coaches. What if they were right?  What if winning was the only thing when it came to NHL standings?

You can’t debate the merits and faults of the current overtime system without considering the elimination of the loser point. Why are we awarding teams that lose? Yes, they played some extra hockey, but they still lost. This isn’t youth soccer; not everyone gets a trophy just for showing up. If we’re going to agree to the shootout as a decision-making tool, then why are we afraid to commit and go Full Monty on it and leave the losers with nothing?

Two points for a win. Nothing for a loss. Very simple and easy to keep track. Hell, get rid of points altogether and just count wins. That’s what it’s all about, right?

Guess what? It still doesn’t make a difference – at least not this season.  Overall, though, it just might.

In the East, the Penguins take over the top spot in the conference. The Senators, now at one game over .500, slide a bit, as do the Devils. (Before the whole silly overtime loser point went in, a team DID make the playoffs with a record below .500.   Out West, it’s more of the same. No change in the division leaders. The only moves are at the bottom of that six-way playoff battle. This time, the Red Wings and Sharks both come up short. 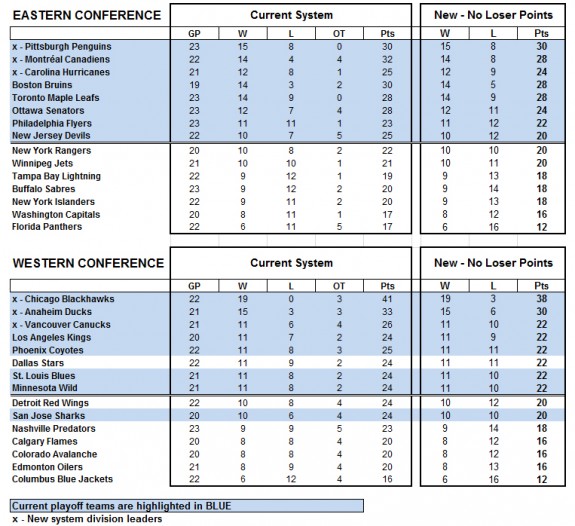 Last season, this approach would’ve had a significant impact. Two playoff teams would’ve missed the dance entirely. The Florida Panthers would have gone from winning their division to early April tee times at Doral. Instead, the Caps would’ve taken the Southeast. The Sabres, much to the delight of western New Yorkers, would’ve snuck in at the eight seed and faced the Rangers in the first round.

In the Western Conference, Dallas would have squeaked past Colorado and the Los Angeles Kings to claim the eight seed. That’s right, the eventual Stanley Cup Champions would’ve missed the playoffs if they weren’t awarded for losing fifteen overtime games. But maybe they should have.  They really didn’t deserve to be in the playoffs at all.  Of the 82 games they played in 2011-12, they won only 40. Throw out the charity points and they’re two games below .500. 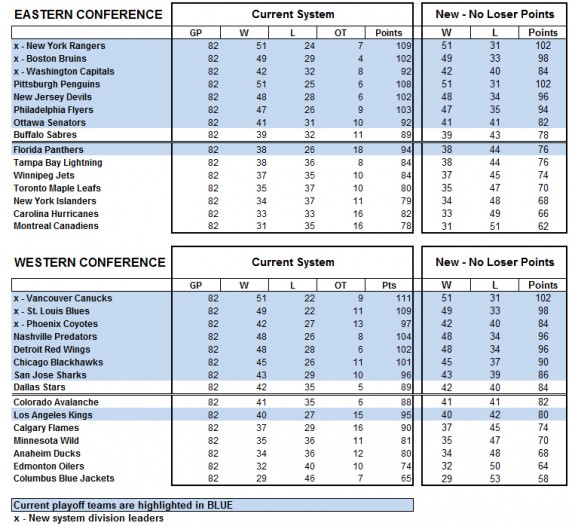 When you lose more games than you win, though, doesn’t that seem right?

Teams will adapt to whichever approach the league uses. Obviously, coaching strategies will change to fit the system. The law of averages will, for the most part, balance out the effects of any changes. You win some, you lose some, as they say.  The idea, though, is to change the system so that the best teams come out on top.  Losing in 64 or 65 minutes instead of in 60 doesn’t necessarily make a team better, even if the NHL’s standings beg to differ.

The game would be better served with a single-minded approach to calculating standings – one where winning is the only thing.