Best known for giving the Toronto Maple Leafs their 21st captain in franchise history, the Calgary Flames have been dance partners at the trade table with the Leafs a number of times over the last little while.

While they haven’t dealt with each other since Sept. 2013, the Leafs and Flames did exchange players and picks five times in the previous 11 years. With that in mind, here’s a look at the five most recent acquisitions the Leafs have made involving the Flames.

First, let’s go back to Sept. 29, 2013, when the Leafs and Flames found themselves engaged in a minor deal. Joe Colborne had played just 16 games over three seasons for the Leafs following his acquisition from the Bruins. 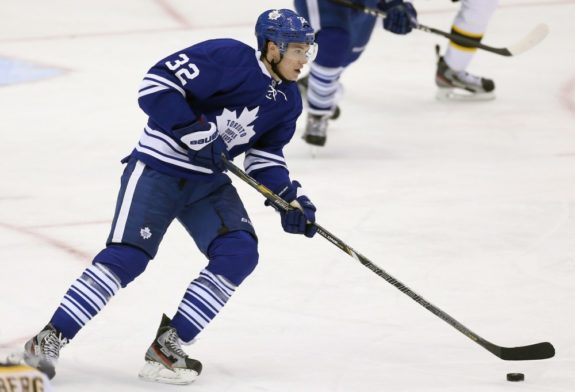 The Leafs moved the young forward to the Flames for a 2014 conditional fourth-round pick. Colborne played 217 regular season games for the Flames, tallying 37 goals and 100 points. He had his best season in 2015-16 when he notched 44 points in 73 games before joining the Colorado Avalanche the following season.

As for the pick, the Leafs would end up moving that to the St. Louis Blues as part of the Gunnarsson-Polak deal in the summer of 2014. The Blues used the pick to take Ville Husso with the 94th overall selection, but the goaltender remains in the AHL.

Before that, you have to go back nearly four years to Jan. 31, 2010. That’s when the Leafs would acquire their eventual 21st captain in franchise history. The Leafs traded four pieces to the Flames – including forwards Niklas Hagman, Jamal Mayers and Matt Stajan as well as defenceman Ian White. In return the Leafs acquired prospect Keith Aulie, forward Fredrik Sjostrom and defenceman Dion Phaneuf.

Hagman played 106 games for the Flames over parts of three season and tallied 42 points over that span. Mayers played just 27 with six points to show for it before he shipped out to San Jose and Chicago. White tallied 18 points in 43 games in a Flames’ uniform but left following the 2010-11 season.

As for Stajan, he remains to only piece still with either franchise. He’s in his ninth season with the Flames having recorded 186 points in 546 games for the team. Still, Phaneuf arguably had a bigger part for the Leafs. 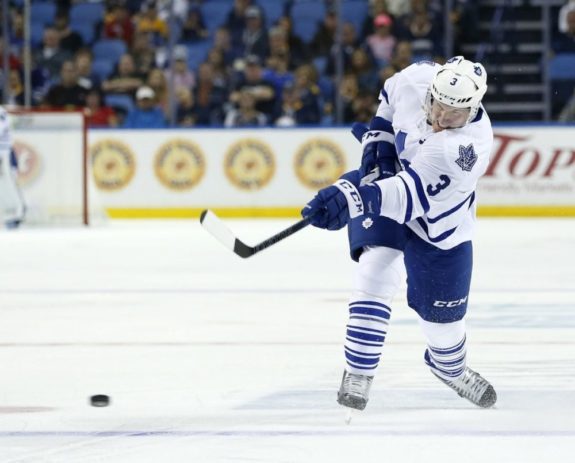 Phaneuf played 423 games for the Leafs and was named captain of the franchise following his acquisition. He tallied 196 points during his tenure in Toronto and was a polarizing player during most of his stint with the Leafs. The team would eventually ship him and his big contract out to the Senators where he would enjoy parts of three seasons.

As for Sjostrom, he played 85 games for the Leafs over parts of two seasons, collecting 10 points over that span, while Aulie played 57 games and scored two goals and four points.

Prior to the Phaneuf trade, it was a trade back on Jul. 27, 2009, in which the Leafs acquired Wayne Primeau and a 2011 second-round pick for defenceman Anton Stralman, forward Colin Stuart and a 2012 seventh-rounder.

Primeau played just 59 games for the Leafs to close out the 2009-10 season, racking up eight points in the process before he retired from the NHL at the age of 33. The pick the Leafs acquired, was moved to Chicago who used it to take Brandon Saad with the 43rd overall selection.

The third-round pick was eventually moved to Minnesota who used it to take forward Danny Irmen. He played just two games for the Wild in 2009-10 and has been in Europe ever since.

As for Joseph, he never did sign with the Flames. Instead, he signed with the Detroit Red Wings and spent two seasons with them collecting a 50-29-9 record over that time. 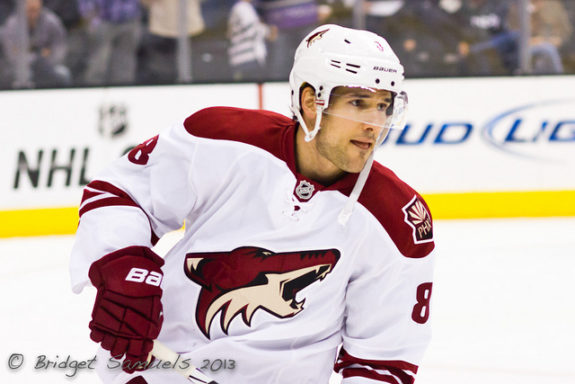 Ironically, Lombardi would play for both the Flames and Leafs franchises with stops in between. (Image: Bridget Samuels)

The Leafs used the pick to take goaltender Todd Ford with the 74th overall pick in 2002. Ford remained a minor-leaguer his entire career and never saw time with the Leafs. As for the picks the Flames acquired, Matthew Lombardi with the 90th overall pick and Kristofer Persson with the 159th overall pick.

Persson never played an NHL game, while Lombardi was a major piece for the Flames over parts of five seasons. He scored 65 goals and 167 points in 347 games for Calgary over that span and averaged just under 16 minutes per game. Ironically, he would eventually play 62 games for the Leafs in 2011-12, tallying a total of 18 points.

So there you have it – the most recent five trades between the Leafs and Flames. Was there any clear-cut winner in any of the deals? Be sure to share your thoughts on these deals below and tune in for the next one when we look at the Leafs’ most recent deals with the Carolina Hurricanes.