It’s been three full seasons since Boston Bruins mainstay Milan Lucic packed his bags and made a near 3,000-mile trek from the East to West Coast.

The Bruins, who traded Lucic to the Los Angeles Kings just prior to 2015’s free agent frenzy, received goaltender Martin Jones, Colin Miller, and the 13th overall pick in the 2015 NHL Entry Draft in return.

While none of the players involved remain on either team, it was an interesting trade. While it had some impacts on the Bruins and Kings they still feel today, it’s actually other franchises that have reaped the greatest rewards from the deal’s ripple effects.

Prior to the trade, the then 27-year-old Lucic had spent his entire eight-year NHL career in Beantown. A prototypical power forward, the often ferocious B.C. native had built a reputation as a relentless player with a nasty edge who could dominate physically and get on the scoresheet through sheer force of will. His two-way skills and pugnacity made him a fan-favourite.

Lucic made an impact in black and gold, notching 139 goals and 203 assists in 566 regular season games along with 772 penalty minutes. He’d also been a key contributor in deep playoff runs, tallying a further 61 points and helping the Bruins capture the Stanley Cup in 2011 over the Vancouver Canucks and reach the Final versus the Chicago Blackhawks in 2013.

Although he was one of the franchises’ most recognizable players, his 2014-15 numbers — 18 goals and 26 assists in 81 games — represented a dip from his past few seasons, and the Bruins’ dynasty was in its dying days. They also had a brand-new general manager in Don Sweeney, who’d been hired to replace the fired Peter Chiarelli a month prior.

“Lucic was costing the Bruins $6 million per season and coming off an 18-year-goal year when Sweeney decided the odds were against Lucic improving in the seasons ahead,” wrote CBS Boston’s Matt Kalman in 2017. “Maybe Lucic’s presence would’ve been the difference in the Bruins making rather than missing the playoffs in 2015, but Sweeney & Co. knew it was time for a reboot and they weren’t really going to contend that season. They needed to get their act together to contend in 2018 and beyond.”

Kings GM Dean Lombardi had forwards on the brain. His push to acquire Lucic was borne out of fear he was going to lose two key cogs — Justin Williams and Jarrett Stoll — to unrestricted free agency on July 1. His fears later proved legitimate, as Williams signed with the Carolina Hurricanes and Stoll went to the New York Rangers.

Lombardi also wanted to acquire a left-handed shooter so Marian Gaborik could shift back to his natural position of right wing. (That move wouldn’t pan out so well — Gaborik was posted just 22 points in 54 games the next year.)

Even though Lombardi gave up a lot, he was nonetheless happy with the acquisition and compared Lucic to an New York Islanders legend. “To get a player like Clark Gillies, there’s not many like this in the league, that can play with top players and bring that element,” he said in a conference call the day after swinging the deal.

Lucic’s arrival should solidify a first line of Lucic on left-wing, Anze Kopitar in the middle and Marian Gaborik on the right side”, wrote The Hockey Writers’ Eric Roberts in his analysis of the trade.

A Busy Week for the Bruins

The trade was complete, but work wasn’t done for Sweeney — with their pick from the Kings, he selected Jakub Zboril at 13th overall.

Despite the Bruins’ goaltending situation being in flux — Niklas Svedberg had appeared in 18 games as Tuukka Rask’s backup but had already departed for the KHL in May — Sweeney decided to flip Martin Jones to the San Jose Sharks in exchange for Sean Kuraly and a first round pick in the 2016 NHL Entry Draft.

The Jones trade left Lucic and Colin Miller as the two players who would actually suit up for the teams they were traded to.

Lucic and Miller’s Cups of Coffee

However, Lucic and Miller weren’t long for their new surroundings: both would only spend a single season with their new teams. Lucic, for one, enjoyed his stint in La-La Land — he had a bounce back campaign, tallying 20 goals and 35 assists.

His defensive play and puck possession numbers were good too — he dished out 244 hits, was plus-26 and posted the best Corsi and Fenwick numbers of his career. The Kings would finish second in the highly-competitive Pacific Division with a 48-28-6 record, but were dispatched in the first round, 4-1, by the Sharks.

Miller, meanwhile, selected 151st overall in the 2012 NHL Entry Draft, had gained profile for his play on the blue line — 51 points in 70 games and 10 more in 19 playoff contests — for the Calder Cup champion Manchester Monarchs the year before, made his NHL debut. He played 43 games for the Bruins and 20 more for their AHL affiliate in Providence, putting up a total 28 points between the two levels.

The trade unraveled rather quickly, and, in the aftermath of that unraveling, it’s clear other franchises — most notably the San Jose Sharks and Vegas Golden Knights — benefited more than the Bruins or Kings.

The Bruins and Kings were both guilty of asset mismanagement and giving up on players too early. Martin Jones, in his three seasons since being cast aside by both clubs, has established himself as one of the Pacific Division’s most dominant net minders.

Remember when the Boston Bruins had Martin Jones for like 20 minutes this off season and traded him for nothing?

In those trio of campaigns, which includes the Sharks’ Stanley Cup run in 2015-16, Jones has never had a losing season, a GAA of above 2.55, or SV% of below .912. Jones cashed in with a well-deserved six-year deal in 2017 that will keep him a Shark through his prime. He was a late bloomer compared to other goaltenders, but both the Bruins and the Kings must be kicking themselves for letting him slip away.

The Bruins were also guilty of mismanaging Colin Miller. They chose to leave him exposed in the NHL Expansion Draft and the Golden Knights scooped him up. Miller was excellent in his first season in Sin City and showed good offensive awareness, a powerful shot, and good puck moving skills, tallying 10 goals and 31 assists.

Defensively, the 6-foot-1 blueliner was solid as well, racking up 165 hits while posting strong Corsi and Fenwick numbers. The Golden Knights signed him to a four-year extension in July, which at this point, looks like a steal.

Lucic signed a five-year, $42 million contract with the Edmonton Oilers in 2016, which reunited him with former Bruins GM Peter Chiarelli. The Kings, whose front office was unraveling, balked at offering the unrestricted free agent an extension and lost him for nothing.

In his first season in Oil Country, Lucic picked up right where he left off in L.A., playing in all 82 games putting up 50 points in the regular season — 25 of which came on the power play — and six more in the playoffs. However, his great power play numbers hid his lack of production at 5-on-5. 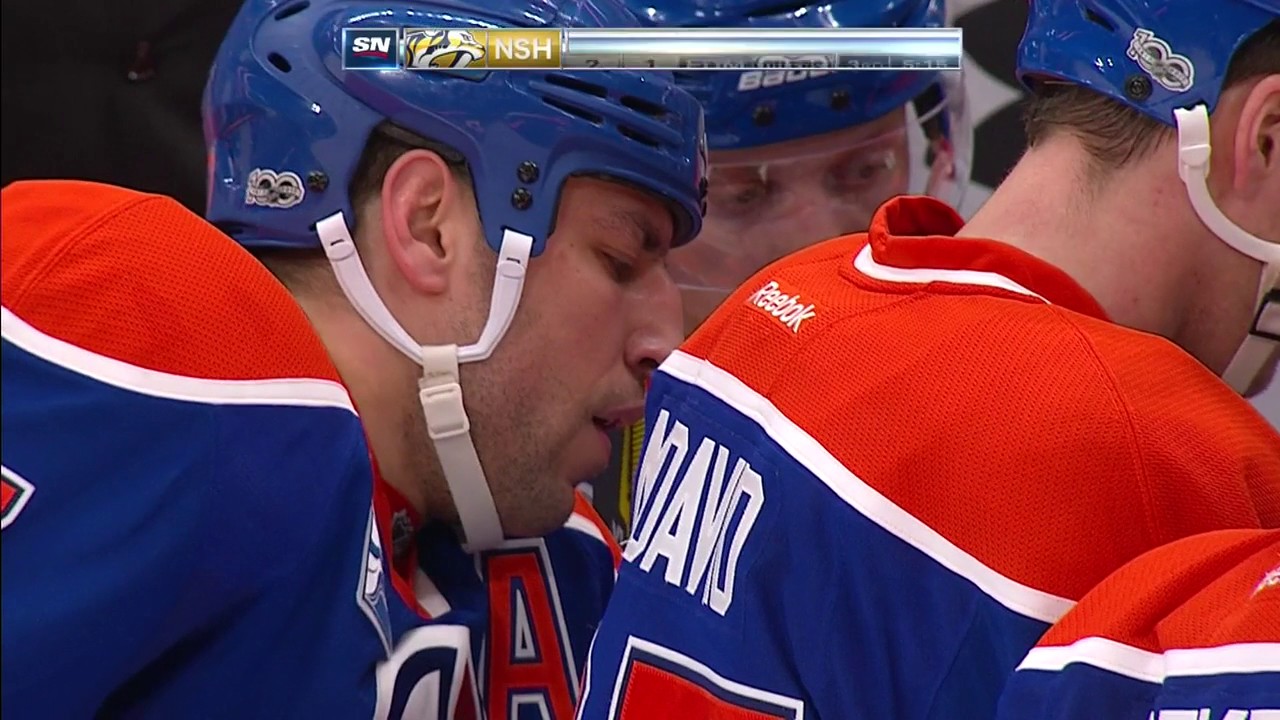 Lucic had a rougher go in 2017-18. He scuffled badly, as did the entire Oilers squad that finished with 25 fewer points than they did the year prior. Lucic’s power play production dropped all the way to a paltry seven points and his 5-on-5 numbers continued to decline. He also suffered an almost-unthinkable 29-game goal drought.

While his rocky season led to a litany of head-turning trade rumours over the offseason, he remains with the Oilers and will be looking to bounce back in 2018-19 and prove he’s worth the dough he’s making.

Trade Better for Bruins Than Kings

While ultimately, the Sharks, Golden Knights, and Oilers have been the biggest beneficiaries of the trade’s ripple effects, it’s clear the Bruins did better than the Kings.

The Kings have nothing left from the trade and gave up Jones, Miller, and a first round pick for a single season of Lucic’s services.

The trade and failure to retain Lucic are generally regarded as two of the final nails in the coffin of Dean Lombardi’s tenure as GM — he was fired in 2017. The Bruins, on the other hand, have three good, young prospects in their system to show for the trade.

Jakub Zboril, who they selected with the Kings’ pick, has plenty of potential. DobberProspects describes the Czech native as “having a rocket of a shot” and “upside as a top-four two-way defender.” In 2017-18, he adapted well to the pro game, posting 19 points in 68 games for the Providence Bruins.

The Bruins also have Sean Kuraly, who spent the majority of 2017-18 with the club and is most memorable, so far, for scoring his first two NHL goals in dramatic fashion during the 2017 Stanley Cup Playoffs. Lastly, they have University of Wisconsin product Trent Frederic, who they selected using San Jose’s 29th overall pick in 2016.

Overall, while both the Kings and Bruins were guilty of mismanaging the assets they received in the trade  — and thus didn’t get all the benefits out of them they could have — the Kings are guilty of doing so to a greater extent. This allowed other franchises to grab players that have made, and will continue to make, big impacts for years to come.