When it comes to the draft the term bust is thrown around rather easily. Names associated with a bust include former first overall picks Patrik Stefan (1998 – Atlanta), Rick DiPietro (2000 – New York Islanders) and Alexandre Daigle (1993 – Ottawa Senators).

There is a lesson to be learned by the Edmonton Oilers and their development of Nail Yakupov from the makings of former 1st round nothings.

What Happened to Patrik Stefan?

Patrik Stefan was pegged to be a top pick in the 1999 draft and was seen as a future dominant power-forward. What also fed into the hype was that Stefan as a 17-year-old was playing with men in the old IHL for the Long Beach Ice Dogs averaging over a point-per-game.

When draft day came around the Sedin Twins wanted to go somewhere they could play together. Pavel Brendl, Tim Connolly and Kris Beech were the other top prospects at the time so they took the guy that made the most sense at the time knowing they couldn’t get both Sedins.

So with their first pick in franchise history the Atlanta Thrashers took Stefan, a player scouted well above his ability. To put this into comparison, most of the top prospects from Europe were playing in their native top leagues at the same age. Stefan however was in North America which gave NHL scouts more of an ability to scout him. In hindsight the thought would have been scouts could have seen the major blemishes in Stefan’s game like a lack of foot speed, elite puck-handling skill and scoring prowess.

After his contract expired in the summer of 2007, Stefan was not picked up by another NHL team and eventually took his talents overseas before retiring.

What Happened to Rick DiPietro?

In the summer of 2000 Rick DiPietro became the first goaltender to go 1st overall in the NHL Draft in 32-years after Michel Plasse did it in 1968 with the Montreal Canadiens.

High expectations had DiPietro, a product of Boston University, pegged to be the next great goaltender to have come out of the United States, even better than Mike Richter. Eventually DiPietro was rushed to the NHL by Mike Milbury and the Islanders management structure struggling mightily until a breakout season in 2005-06 where he played for the US Olympic team and eventually earned himself the now infamous $67.5M 15-year contract that would eventually be bought out in 2012.

“Most people thought he was going to be the U.S. Olympic goalie [for years to come] and one of the elite goalies in the NHL,” Red Wings GM Ken Holland

DiPietro’s downfall would eventually become the consistent amount of injuries that would pile up on a yearly basis causing him to spend extensive amounts of his career on LTIR. All the concussions, knee and hip problems caused for some difficulty when he would eventually return to the net for the Islanders.
Regardless DiPietro was drafted well above the logical expectations of his capabilities and some of the fault lies with Islanders management from his early years on pushing him when he wasn’t ready. Some still beg the question if DiPietro wasn’t rushed to the NHL if he would have still been a decent goaltender today.
DiPietro eventually got demoted to the minors in Bridgeport, bought out, played a cup of coffee overseas before coming back on a PTO with the Carolina Hurricanes and getting a release from his PTO while with the Charlotte Checkers.

“While Alexandre Daigle and Patrick Stefan are usually the other two major contenders, at least they were both considered top-tier talent in their draft. DiPietro was considered top 10 but was still neck and neck with Brent Krahn in the days leading up to the draft.” – Mark D, SB Nation Lighthouse Hockey

The other goaltender Brent Krahn also failed to meet expectations after going 9th to the Calgary Flames. The best goalie of that 2000 draft ended up being the 205th pick Henrik Lundqvist.

First off, goalies are incredibly hard to project, no matter how far along or how good they are. Second, the No. 1 pick is so valuable that risking it on a goalie is just silly — especially since the chances of landing a franchise forward are pretty decent in most drafts. Third, an above-average goalie can be acquired at a much better price almost every year on the free agent market. – Alvin Chang, sports author

What Happened to Alexandre Daigle?

Maurice Richard, Jean Beliveau, Guy LaFleur, Mario Lemieux and Alexandre Daigle. That was supposed to be what scouts believed was the evolution of the next great french-canadian superstar. Reality had a different script. A junior league sensation playing for the Victoriaville Tigres of the QMJHL in the early 1990’s, Daigle was pegged to become one of the best prospects to have ever been drafted. Scouts had figured Daigle had it all; speed, skill and scoring prowess. The perfect hockey player. It led to Daigle being given the largest rookie contract in NHL history at $12.25M on a 5-year deal. Eventually this is what led to Gary Bettman and the Board of Governors creating the outline of what would become known as the entry-level contract (ELC).

After a stellar 51-point rookie season leading the dismal Ottawa Senators, Daigle seemed to become more infatuated with his life off the ice and the glits and glamor that come with being hockey’s next great superstar. Ultimately a lack of motivation and an inability to overcome the tight checking NHL style of play, Daigle peaked as a 19-year-old. This led to Daigle bouncing between several NHL clubs including; Philadelphia, Tampa Bay, NY Rangers, Pittsburgh and eventually Minnesota never building upon the success of his rookie season or meeting the great expectations of his draft year. He did have a short career resurrection in 2003-04 as a member of the Minnesota Wild but found his way to Europe for the 2006-07 season with HC Davos winning two National League championships. He left the game of hockey in 2010 and has yet to return.

“I’m glad I got drafted first, because no one remembers No. 2.”- Alexandre Daigle, 1993 NHL Entry Draft

The 2nd overall choice in the 1993 draft was Chris Pronger.

What Happened to Everyone Else In Between?

For every Alexander Ovechkin, there is a Nikita Filatov. For every Jonathan Toews, there is a Scott Glennie. For every Carey Price there is a Rick DiPietro. The list goes on. Being a first round pick is a statement of where you were as an 18-year-old and not always a projection of where you will be 5-10 years down the road. Scouting isn’t an exact science and there will always be flaws. The way to counter it is to give your prospects the time to properly mature, manage their growth and develop their skill-set at a pace relative to the abilities of the prospect at the time. Some teams have gotten into the habit of being over-zealous and anxious to put their young hot-shot draft picks into the NHL lineup based off the faults of hype, instead of realistic abilities in the moment.

Gabriel Landeskog, Taylor Hall, Jeff Skinner and Patrick Kane are some of the names of rookies that merit being able to make the jump fresh out of their draft year.

Jonathan Huberdeau, Jonathan Drouin and Erik Gudbranson are example of solid prospects that were given a year to return to junior and stay the course of development in the hopes of one day harvesting the most of their talents. 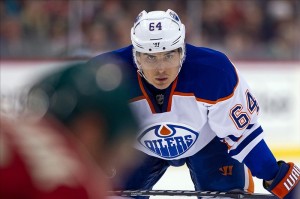 So What Happens with Nail Yakupov?

Before fans continue vilifying the 20-year-old Russian as a reincarnation of Patrik Stefan, Nikita Filatov and Alexandre Daigle remember this. Yakupov was pegged to become the next Pavel Bure out of his draft year. Pavel Bure, love him or hate him, was a generational talent that scored back-to-back 60-goal seasons. That’s unheard of, unless your name is Alexander Ovechkin.

So the expectations were too high to even consider. Every year a player is pegged as being “The Next Brett Hull”, “The Next Chris Pronger”, “The Next Joe Sakic” or even “The Next Jonathan Toews”. These are generational players who’s names are thrown around every year unfairly to 18-year-old kids coming out of junior.

I see Yakupov is a healthy scratch for EDM tonight. An AHL stint would be more helpful in development.

Yakupov fell into these comparisons and like almost all of them will take a step or two down. It’s a rare case that “The Next Brett Hull” comes to fruition in the form of Steven Stamkos or even Milan Lucic becomes “The Next Cam Neely”. Stefan, DiPietro and Daigle were former first round picks that no one took the time to appropriately assess their capabilities and say “Hey this kid needs more time to develop”. They were scouted well above their abilities, their conditioning may not be up to snuff and their skills might not immediately translate to the high-skill level of the NHL. Some of these prospects are just flat out not ready. Nail Yakupov may be one of those prospects and it might be reasonable to give Yakupov a break from the high pressure situation the media and his draft status have placed on him.

I’ve yet to see one legitimate reason why the Oilers shouldn’t let Yakupov gain confidence and improve his defensive game in the AHL.

The place to give the kid a break next year might be to start the season in the AHL with the Oklahoma City Barons with coach Todd Nelson.

Nelson has already done wonders with Oscar Klefbom, Martin Marincin, Mark Arcobello and many others so there is no reason to think he can’t help iron out some of the flaws in Yakupov’s game.

Yakupov under the right tutelage can become a future 30-goal scorer for the Oilers, he just needs time to develop.

6 thoughts on “Nail Yakupov: Learning From the Makings of Former 1st Round Nothings”