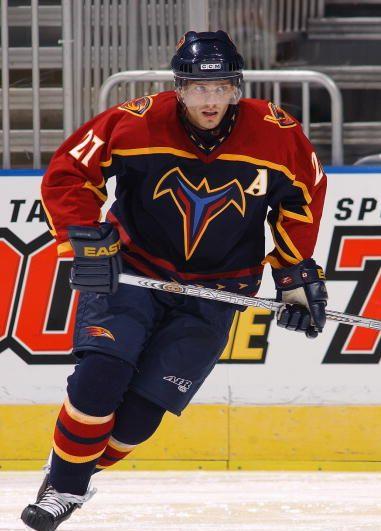 Take a look at our growing  Index of Hockey Biographies

My first subject of this feature was Alexandre Daigle, who went on to have a very disappointing career for a #1 overall pick in the entry draft.   However, there have been worse, and one of them is Patrik Stefan.

In 1997, while the Czech League was on break for the Olympics, Stefan signed to play in the now defunct International Hockey League, (“IHL”) for the Long Beach Ice Dogs.  The IHL was a minor professional hockey league in the United States and Canada from 1945-2001, and served as the alternate farm system to the American Hockey League, (“AHL”).  Financial Instability led to its demise and the remaining teams were merged into the AHL.

During Stefan’s partial season in the IHL he would score 15 points in 25 games while adjusting to the North American style of hockey.  After the 1997-98 season ended, Stefan would make the decision to sign with the IHL full time for the 1998-99 season, his thinking that playing in North America for a full year would prepare him more for the NHL draft than staying in Europe playing for the Czech League.

Patrick Stefan’s first full season in North America would be both positive and negative.  He would score a little more than a point per game, 11 goals and 35 points in 33 games, he would be named IHL player of the week and also had a 4 goal, 5 point night.  However, his season would be shortened by a concussion that would cause him to miss several months and also a chance to play in the World Junior Championships.

At the time (although in hindsight it may seem ridiculous), Stefan was highly regarded in the hockey world.  Here are some examples of what was being said about him at the time:

“He is a big, strong play-maker who sees the ice very well,” said John Van Boxmeer, coach of the Ice Dogs. “The early consensus from scouts is that he could be the first overall pick next year in the NHL Entry Draft.”

“Patrik is a world-class player,” said LA Kings General Manage Dave Taylor.  “He is a good skater, a tenacious player, very skilled with the puck and possesses excellent size, strength and work ethic.”

“I have followed Patrik’s progress since December of 1995.  The impression he left with me then and throughout the various tournaments I have seen him play, is that he is the brightest young prospect developed in the Czech Republic since Jaromir Jagr, ” said Bob Owen of RHO Hockey, a scouting agency.

“He is a cross between Mike Modano and Sergei Fedorov,” said coach Boxmeer.

Stefan, despite injury and concussion problems the year before went on to be the Atlanta Thrashers first pick, #1 overall in the 1999 NHL Entry Draft.

Stefan had a respectable first couple of seasons in the NHL playing for an expansion team, and with the weight of a franchise on his shoulders, scoring 5 goals and 25 points in his first season and then improving to 10 goals and 31 points in 66 games in his second season.  As time would go on, however, injury problems would haunt Stefan, only playing a full season once in his career, and he would never come close to living up to the expectations of being a #1 overall pick.

During the 2003-2004 season, it appeared that Stefan might have finally been making some progress and some thought he might end up being a “late bloomer.”  He had his best seasonyet, finally playing in all 82 games, and scoring 14 goals and 40 points, his career high.  Unfortunately, during the next season he would take another step back with more injury problems and would only score 25 points in 67 games.

Although Stefan had developed into a decent third line player for the Thrashers by this time (when he was actually on the ice) Atlanta decided to cut their losses and traded Stefan to the Dalls Stars along with Jaroslav Modry for Niko Kapanen and a 7th round pick before the start of the 2006-2007 season.  Stefan would play only 41 games for the Stars that year, missing some time due to injury and being a healthy scratch many times.  He would score only 11 points.  When his contract expired, Dallas decided not to re-sign him.

Stefan would go on to sign with SC Bern of the Nationalliga A, a league in Switzerland.  He would only play 3 games before a serious hip injury caused him to decide that professional hockey was no longer worth the trouble of battling through injuries and decided to retire. (For Stefan’s career stats, refer to the Internet Hockey Database)

Stefan is now a Player Agent registered with the NHLPA.

During his NHL career, Stefan would go on to score 188 points in 455 games, clearly making him, at least statistically, the worst first overall pick in NHL history.  The top four are as follows:

Unfortunately for Patrik Stefan, his being a disappointing draft pick is not why he will be most remembered.

Many simply remember him for maybe the biggest blunder in NHL history.  On January 4, 2007, late in the third period against the Edmonton Oilers, Dallas was up by one and the Oilers decided to pull their goalie.  Stefan was on the ice at the time, very skillfully stole the puck and proceeded towards the empty Edmonton net.  He was alone….I mean, COMPLETELY alone, with no one anywhere near him to challenge him, but when he reaches the empty net, he misses.

He literally missed from about one foot away from the net.  If that wasn’t bad enough, however, he also fell and this gave Edmonton a chance at the other end.  Ales Hemsky tied the game.

What an end to a very underwhelming NHL career.

6 thoughts on “What Happened to Patrik Stefan?”