The road to the Stanley Cup Finals is almost paved but there is no denying that after another non-playoff year, the time has come for the New Jersey Devils to take that next important step. There are plenty of reasons to be optimistic about the future in New Jersey. The expectations for the Devils next year should not reflect the lowly standards so many analysts held them to prior to the 2015-16 season. Nevertheless, preseason predictions will also not place the team in an automatic playoff position and instead will more than likely put New Jersey in a bubble spot.

In order to meet or surpass expectations, the Devils need to score more and achieve a level of consistency that has evaded them in the past. But before any of this can happen, a successful offseason must precede it. General manager Ray Shero is beginning what could be one of the biggest summers in recent years for the franchise. Many people may presume that last year held that title, but really that was only the start.

The future is no longer a mystery in New Jersey. There is a clear, definitive path that the team is taking, which is being led by a talented coaching staff. This offseason needs to be the time that people stop looking back at previous issues and instead look forward to changing them. One move will not catapult the team into the next phase. It will come down to a series of situations, many of which will occur between now and the first puck drop of the 2016-17 season. But it has to start somewhere and that may very well be in Buffalo, New York on June 24th and 25th.

Forwards Clayton Keller and Alexander Nylander are just a few names that have been associated with the 11th overall pick. While both forwards could undoubtedly bring value to New Jersey, the true question is whether the Devils should retain the pick. The easy answer is to stay and compile young talent for the future; someone who could become a franchise player. However, with core players such as forwards Adam Henrique, Kyle Palmieri, and Travis Zajac, goaltender Cory Schneider as well as defenseman Andy Greene and Adam Larsson soon entering or even currently hitting their prime, the future cannot be pushed further down the line. The longer it goes the Devils will not only be battling age but also encountering time and contracts.

Last year, the Devils acquired Palmieri at the NHL draft for a second round pick in 2015 and a third round pick in 2016. So there is reason to believe that a similar trade could take place and not cost the Devils their first rounder. But players like Palmieri do not simply appear. Realistically, the chances of acquiring a player like him at a comparable price is not likely to happen again. Shero’s acquisition of Palmieri can now be declared robbery after his elite 30-goal season as well as one of the best offseason moves made by any club last year.

Make no mistake, if New Jersey had a top-five pick, this question would not be asked. But when the team fell out of the top-10 the likelihood of the 2016 pick actually donning a Devils’ jersey next season drastically fell. New Jersey needs a young and ready impact forward that can help add 25-goals now and the 11th pick may be the bargaining chip Shero needs to acquire such a player.

Many of the teams drafting in front of the Devils, but particularly the Edmonton Oilers, will be making changes this offseason. Furthermore, they have been surrounded by the rumblings of certain young, elite forwards being available. One would have to believe that the thought of two early first round picks would entice Edmonton general manager Peter Chiarelli, who desperately needs to shake-up the franchise and help it escape its losing status quo.

Edmonton is the most fitting suitor to trade with considering the team’s bevy of young forward talent and souring culture. Chiarelli is under pressure to resolve many of the team’s challenges. It is not to say that Edmonton’s problems reflect any one player, because that is almost never the case. Nonetheless, a roster shake-up is the second step to changing the coaching staff and management, which has already been done.

While there are a handful of forwards that would benefit the Devils, ideally it would come down to Taylor Hall or Jordan Eberle. Parting with either player will not be easy for Chiarelli, which is why Shero needs to dangle the 11th pick and make it worth while. If Chiarelli wants more, Shero should listen, but the team cannot move any core players or potential star prospects along with the pick.

Both Hall and Eberle on average score about 25-goals a year but can break into the 30-goal range. A change of scenery and less scrutiny may also help Hall or Eberle’s game. But it very well may come down to forward Nail Yakupov, which would be the biggest gamble and one player Shero should not move the pick for. That does not mean the Devils should close the door on a deal for Yakupov but the price would need to be dramatically reduced.

Nevertheless, Chiarelli and the Edmonton Oilers are not the only option. Shero is in a powerful spot and technically cannot lose. The worst case scenario for the Devils is simply picking at 11 and obtaining a talented, young player who can hopefully develop and contribute sooner rather than later. Simply making it known though that the pick is in play can lead to surprises. New Jersey may be able to get its hands on a player that was not previously being shopped or even thought to be available.

One of the biggest arguments against moving the pick could be that the Devils have a large amount cap space entering free agency and that the team should look to spend there instead. While it would be fun to imagine forward Steven Stamkos playing alongside Reid Boucher, the player who broke his OHL scoring title, the chances of Stamkos wearing #91 in red next year is slim to none.

While there are plenty of forward additions that could help New Jersey like Andrew Ladd or even Lee Stempniak, Shero cannot solely rely on the market to provide those two or three offensive players that the Devils need to make them a deeper team. Moreover, he is not going to blow the cap in one offseason and he will also need to consider the bottom six’s struggles last year.

New Jersey is littered with options, including several draft picks over the next two years and its enviable cap space, which also makes moving the pick feasible. It is easy to say that the Devils do not need to part with their top pick, and to an extent that is true. But the reward may outweigh the risk when a person considers the return of a healthy Michael Cammalleri, Henrique and Palmieri coming off of their best offensive season, the expected addition of rookie forward Pavel Zacha, Schneider’s play and a developing defense that shows a great deal of potential. New Jersey’s climb back to the top could significantly speed up without losing the team’s overall bottom line and longterm goal, which is to have sustained success.

The NHL is not about making the safe move. It is about winning and the Devils need another young player that free agency may not be able to provide. In 2013, former general manager Lou Lamoriello made a statement when he traded the ninth pick for Schneider. 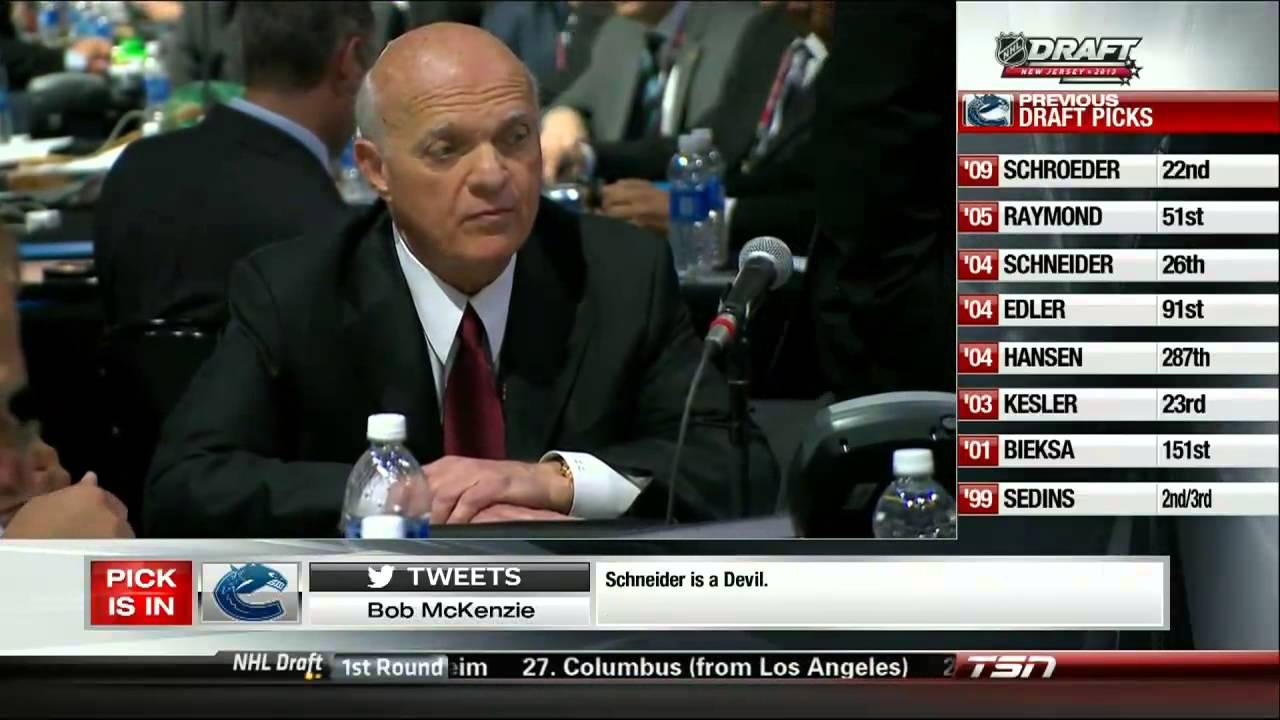 That trade is proof that in order to win, teams cannot always be conventional and do the expected. Furthermore, that trade shows the type of player that can be acquired for a top pick. Trading a first round draft pick is not something to be taken lightly. It is a major move but it is also something that at least needs to be considered.

Amanda Rosko is an avid hockey fan. This is her second year covering the New Jersey Devils for The Hockey Writers. She graduated with honors from Rutgers University in 2014 with a B.A. in Journalism and Media Studies.