The 2015-16 NHL season is already over half over. It seems that just a few weeks ago, it was the offseason and the internet was buzzing over the trades, free-agent signings and ongoing negotiations.

A rash of injuries, the John Scott All-Star saga and many surprising story-lines has made this one of the more interesting NHL seasons in recent years.

Heading into the All-Star break, each NHL team has played around 48-52 games (approximately). This break gives teams a chance to rest and refocus before the push for the playoffs begins. Currently, the Metropolitan division leading Washington Capitals look dominant and Western powerhouses the Chicago Blackhawks, the Dallas Stars and Los Angeles Kings are all among league leaders.

Almost every power ranking has those four teams near the top and while each team does have concerns, such as the Capitals ability to make it past the second round, they’re the best of the NHL right now. Without further adieu, let’s take a look at what each team’s chance is to make the 2015-16 NHL playoffs.

I have compiled data from Sports Club Stats, Hockey Reference, PlayoffStatus and War-On-Ice to bring you the most complete and comprehensive NHL playoff probabilities analysis you can find.

A few notable surprises on this list was the variation in the probabilities of the New York Islanders, the Boston Bruins and Minnesota Wild. However, when you examine the team’s play at even strength, their Corsi For Percentages, it’s logical that no one is sure about these teams. They each have their own strengths and weaknesses, but their poor play at even strength is not a solid indicator for their future.

So for those not well versed in Corsi For Percentages, why do these numbers matter? Well in simple terms, it’s a measure of shot attempts in favor of the team while at even strength. This has been an accurate indicator of possession in the NHL and it’s obvious it’s easy to score and win when you have the puck more than your opponent.

If you’re still hazy on the concept, just take a look at the past six Stanley Cup champions and their respective Corsi For percentages. 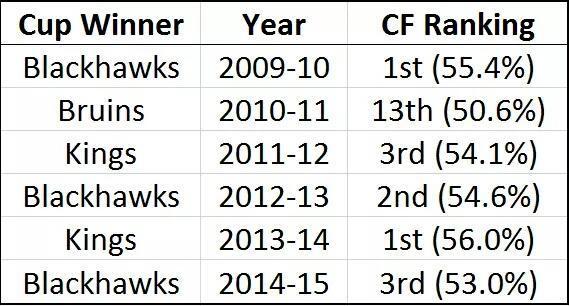 No metric is without it’s flaws and the Bruins in 2010-11 do show that you can win the Stanley Cup without high possession stats, but they’re the outlier, not the norm.

In the case that you’re favorite team does not have a very positive mathematical outlook, you can always look forward to the upcoming draft. Mathematician Micah Blake McCurdy has developed this unique algorithm that calculates a team’s chance of obtaining the first overall pick in the lottery.

It’s been a rocky season for quite a few teams, but the outlook is bright for some who struggled early this season. Were you surprised by any NHL playoff probabilities? How does your favorite team compare to those around the league? Who do you think makes the playoffs and who gets to work on their golf game early this year?

Thanks for reading! Feel free to leave your comments below or tweet me anytime @MPityk_PIT or @MPityk_PHI