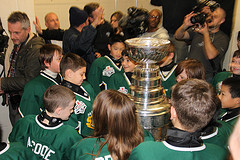 When and if the NHL Lockout finally ends, it will not be easy for the NHL to gain back their disgruntled fans. While the hardcore NHL fans are expected to come back to the game they love en masse, the perimeter fans will be a hard sell, especially in light of the second lockout in eight years.

For many fans, they have lost a measure of trust in the NHL, causing them to second guess their support of the league, billionaire owners and millionaire players that cannot seem to figure out a way to divide more than $3 billion in league revenues.

Behind the scenes the NHL is already attempting to “make nice” with its fan base by participating in some unique community based events which are sure to bring a smile to the faces of those involved.

On December 6th, 2012 the NHL surprised a group of Major Atom Select hockey players and their coaches with a visit to Scarborough Village Arena.

Now, this was no ordinary visit. With the support of Scotiabank and the Hockey Hall of Fame, the NHL brought the Stanley Cup to the arena for a group Parkwoods Hockey League players to enjoy.

Heck, even Phil Pritchard (the keeper of the Stanley Cup) was in attendance, white gloves and all!

Needless to say, the arena was a buzz with players, coaches and parents grinning from ear-to-ear with excitement and pride as they all got to spend some time with Lord Stanley’s Mug.

The event was made even more special as it was a surprise— nobody outside of a few coaches knew that the Cup would be there as they were sworn to secrecy.

The NHL made an official unveiling of the Stanley Cup before their practice at around 7:15 pm where the kids walked into the dressing room and were shocked to find the Stanley Cup sitting there. 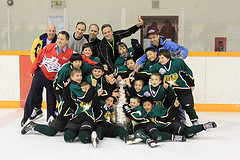 After about 20 minutes of photo’s and hanging out with the Cup in the dressing room, the Cup was brought onto the ice where the players, coaches and family members were able to take a team shot and have their individual picture taken with what many believe to be the best looking trophy in all of sports.

With the Cup on one side of the ice and the players on the other, the coaches put their team through their drills, which I imagine were quite spirited.

After practice they had a mingle session and meet and greet with some food, representatives from Scotiabank and the Cup. The Cup left around 9:15 pm, but not before making a dream come true for everyone in attendance.

The only thing those in attendance were not permitted to do was hoist the Cup— that will have to be earned via a Stanley Cup victory someday.

The Parkwoods Stars Major Atom Selects (who won the tier one championship last season) are a mixed gender team, consisting of two girls—Sarah Brooks, who is one of the teams best defenseman and Sofia Stoetes, who is the backup goaltender. As fate would have it Sophia was not in attendance, but you just know her teammates will have plenty of pictures and memories to share with her upon her return to the team.

Head Coach J. Francis Cooke was asked what the coolest part of having the Stanley Cup in his dressing room was. “It’s hard to say because the entire evening was amazing and extremely well-executed, said Cooke. If I had to say, it had to be the reaction of the kids when they initially walked into the room and saw the Cup there. They literally could not believe it.” 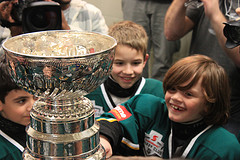 The only thing that would have put the icing on the cake of the entire event would have been having an NHL player in attendance, sadly this was not the case.

This event, as unique and exciting as it was, is exactly the type of thing the NHL will have to do to bring back the fans. The players will undoubtedly continue to attend their charity events, sign memorabilia and make the odd TV appearance, but it is the personal touches, the unforeseen events that will help re-establish their game and the trust from the fans.

In a time when it is hard to believe NHL hockey will ever be back, this incident was a step in the right direction for the NHL and a sign that, despite the squabble over money and the fact the league is marred in a lockout, the NHL still cares.