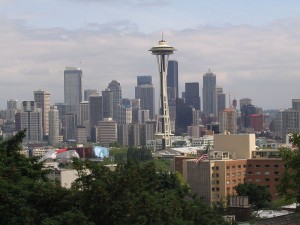 With mountains, lakes, forests and money, about the only thing Seattle doesn’t have is the NHL and NBA – yet. Credit: Spmenic, at Wikimedia Commons.

The Emerald City has plenty of things going for it: snow-capped mountains, abundant lakes and rivers, the shimmering waters of the Puget Sound, millions of friendly people and a coffee stand on every block. It also has a ranked college football program, an elite NFL team, a bad baseball club, and a bevy of soccer fanatics who relish 1-0 final scores.

Despite being the 12th largest media market in the U.S., however, what it has never had is the National Hockey League. Rumors have surfaced indicating NHL support for an expansion franchise in Seattle, with one report suggesting commissioner Gary Bettman has urged the Board of Governors to award a franchise to the city in time for the 2014-15 season.

With all that said, would the NHL actually work in Seattle?

For a city that has never landed an NHL franchise, Seattle has a surprisingly robust hockey history, with a number of championship-caliber professional teams dating back nearly 100 years. The following is a brief summary of those clubs:

Seattle Metropolitans. In 1917, the Pacific Coast Hockey Association Seattle Metropolitans became the first American team to claim the Stanley Cup, defeating the Montreal Canadiens in a best-of-five series 3-1. They played for the Cup two more times in the ensuing three seasons, with one series ultimately called off due to the Spanish flu pandemic and losing the following year to the Ottawa Senators. The team disbanded following the 1923-24 season, leaving Seattle without a team for the next four years.

Seattle Eskimos. Despite being oddly named, the Eskimos played in the newly-constructed 4,500 seat Civic Arena for three seasons, making the playoffs twice and losing in the 1928-29 finals.

Seattle Sea Hawks. The Sea Hawks played for eight seasons before the five-team Northwest Hockey League folded after the 1940-41 campaign. During their run, they made the finals four times, capturing one championship — Seattle’s first in 16 years.

Seattle Ironmen. Initially an amateur circuit, the Pacific Coast Hockey League turned professional for the 1948-49 campaign, the Ironmen’s fifth season of existence. They won the league while still under amateur status in 1944-45.

Seattle Bombers. The PCHL became the Western Hockey League just prior to the 1952-53 season, and with that, the Ironmen were renamed the Seattle Bombers. Bomb they did, as the team finished below .500 both seasons of its existence and after suffering losses due to low attendance (about 2,000 fans per game), the team was taken over by the league.

Seattle Americans. New ownership group, same struggles in year one of a three-year run. However, the team was on the rise in the mid-1950’s, winning the first playoff series for a Seattle club in nine seasons.

Seattle Totems. The longest-running professional hockey team in Seattle’s history, the Totems captured three championships in 17 seasons, playing in the Civic Arena and later, the Seattle Center Coliseum. Ultimately, the Totems’ success began to wane, and although the ill-fated award of an NHL franchise to Seattle in 1974 eventually fell apart, it hastened the demise of the Totems, who ceased operations in 1975. Professional hockey has yet to return.

The case for the NHL in Seattle

The city of Seattle would seem to have the requisite attributes for the NHL to succeed, including the following undeniable assets:

Hockey pedigree. As mentioned above, the Seattle area had over sixty years of professional hockey history, along with several successful junior hockey teams currently operating.

Geography. Situated just south of Vancouver, B.C. and within a day’s drive of Calgary, a Seattle-based team would have natural geographic rivals north of the border. It is probable that the new team would also develop rivalries with San Jose, Los Angeles and Anaheim as well.

Fan support. This one is perhaps a bit more dicey, as not all Seattle teams have enjoyed sellout crowds. Furthermore, some studies have shown that with the NHL and NBA in town, Seattle would be the third-most saturated sports town, behind only Denver and Cleveland. Having said that, Seattleites flood into Century Link to watch soccer and football, making so much noise at times that a seismic event is registered. The Sonics generally attracted good crowds when they were in town, and when the Mariners were actually decent, they were amongst the league-leaders in attendance.

Arena. As mentioned in this and other pieces I’ve written here over the past year, a state-of-the-art arena has been approved by the City of Seattle. The only thing stopping the project from breaking ground is an anchor tenant.

Money. With Microsoft CEO Steve Ballmer, the Nordstrom family and area native Chris Hansen spearheading the drive toward building a new arena and obtaining NHL and NBA anchor tenants, capital is the least of the group’s concerns. Furthermore, the region is replete with wealth, corporate sponsorship opportunities and massive amounts of marketing dollars.

Furthermore, with the league’s new alignment for the 2013-14 season, there is room to add another two franchises to the Western conference in order to even things out with the Eastern conference. According to local sports radio host Mitch Levy, NHL Commissioner Gary Bettman is a strong proponent of a new Seattle franchise.

Sure, there are arguments against more sports teams in Seattle: the saturation issue mentioned earlier, the up-and-down attendance of the Mariners, and as some have opined, the negative potential impacts to traffic. However, with all that said, the evidence shows that the NHL is a natural fit for Seattle. Will the NHL finally land in the Emerald City, perhaps in time for the 2014-15 season? Stay tuned.