In Part 1 of our Penguins-Flyers series preview, we analyzed the two teams from a psychological and emotional perspective (click here to read Part 1).

The second part of our preview will focus on the tactics each team hopes to employ to gain an advantage.

On April 1, Pittsburgh and Philadelphia faced each other at the Consol Energy Center and gave fans a preview of the ebbs and flows they can expect in this first round matchup.  The Penguins jumped out to a 2-0 lead less than five minutes into the game on goals by Steve Sullivan and James Neal.  They forechecked aggressively and created a number of quality scoring chances, putting the Flyers back on their heels.

Pittsburgh came out flat in the second period.  Wayne Simmonds scored quickly for the Flyers and by the time the final period rolled around, the Penguins were frustrated.  That frustration led to penalties and turnovers and the Flyers eventually cruised to a 6-4 victory.

A few Penguins players said after the game that they relaxed after getting the early two-goal lead.  But what exactly changed and why was Philadelphia able to come back so easily?

Pittsburgh wants to play an up-tempo style of hockey. Their stated goal is to spend as little time as possible in their own end of the ice and they utilize long stretch passes up the boards to transition from offense to defense. (Read last year’s Tampa-Pittsburgh series preview for a look at this play.)  In a matter of seconds, the puck can move from behind Pittsburgh’s net to the other end of the ice where the Penguins’ aggressive forecheck can wear teams down.

Most teams around the NHL have scouted this and try to take away the Penguins stretch pass options, but only handful have been successful (St. Louis, NY Rangers).

When Pittsburgh has the puck deep in their own end of the ice, the Flyers often pressure the Penguins defensemen hard in an attempt to limit time and space.  Wingers take away the easy passes up the boards and force Pittsburgh to work the puck through the middle of the ice.

In situations where Pittsburgh does have time to make plays — such as after a Flyers’ dump or line change — Philadelphia drops back into a neutral zone trap that can be very tough to beat.  They slow the Penguins down and take away their preferred passing options, often leading to turnovers. 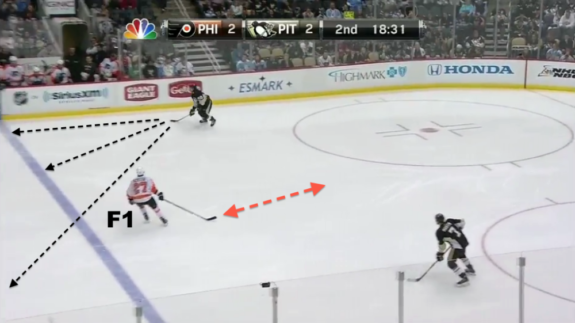 From a standard setup with three forwards up and two defensemen back, the right winger (27 – Max Talbot, we’ll call him F1) moves up to challenge the Penguins defenseman with the puck.  Notice Talbot’s stick is positioned to take away the defenseman-to-defenseman pass as he tries to steer the Penguins to one side of the ice. 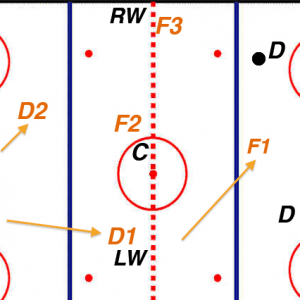 Kris Letang’s passing options with the puck are now limited to his three forwards. Even with a high-definition TV feed, it’s still difficult to get a screenshot with all Flyers players setup in their trap.  (If you enjoy the tactical aspects of hockey, buy a ticket in the higher levels of your local arena to really get a feel for how these systems work)

The diagram to the right shows what the Flyers’ trap looks like.  The right defenseman (D1) will often move up to take the right winger’s spot.  The other defenseman (D2) will drop back to the center of the ice.  After these rotations, the Flyers are setup in the neutral zone trap that they said made a mockery of the game: the 1-3-1. 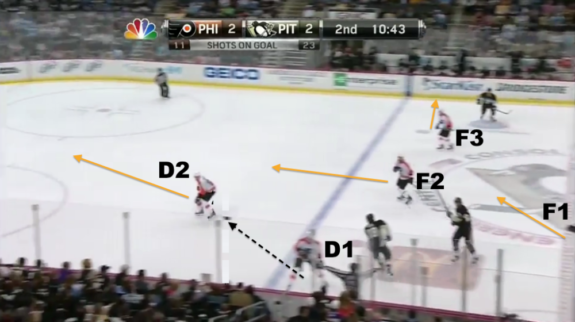 Following a turnover, like the one pictured above, the Flyers are already in position to make a quick regroup and head back the other way.  Because D2 will have to cover from left to right and also handle any Pittsburgh dumps into the zone, he needs to be very mobile.  Philadelphia prefers to have smooth-skating defensemen like Matt Carle in this position to pick up any loose pucks.

Tampa used Pavel Kubina in this role last year against Pittsburgh with the opposite idea in mind.  Kubina’s mobility is dreadful at this stage of his career, so he was less of a liability standing in front of his own net as D2.

Regardless, here’s how the regroup will unfold: 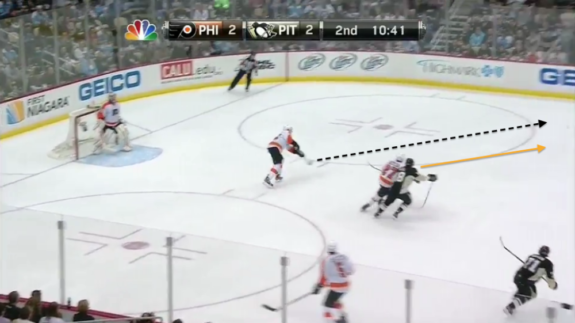 As F2 curls back for support, he also builds up speed.  F1 is making a similar curl higher in the zone (off the screen).

When F3 receives the pass from D2 on the boards, his best option is to chip the puck to F1 or F2 who are both already going full speed through the neutral zone. 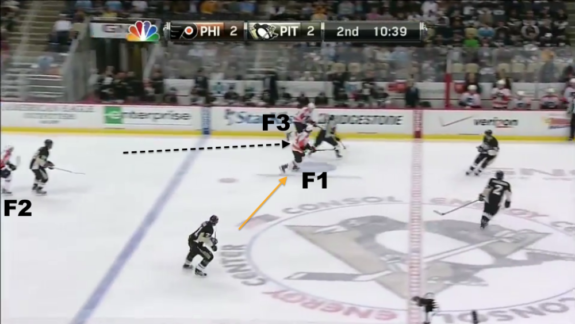 “In the first period we got the puck deep, we played a speed game and they got nothing against us,” Penguins defenseman Zbynek Michalek said after the April 1 game.  “We want to play a fast forechecking game.  When we’re doing that we’re a really good team and tough to play against.  As soon as we started making turnovers in the neutral zone, they pounced on that.”

Pittsburgh’s best strategy against the Flyers’ trap is to move the puck up ice as quickly as possible.  This fits well with the Penguins’ preferred style of play, as we discussed above, and it doesn’t allow the Flyers to get into position to clog the neutral zone.

But with the fast-paced breakouts comes the risk of turnovers.  When three forwards and a weakside defenseman are streaking up ice to push the play, any turnover leaves the Penguins vulnerable to an odd-man rush the other way:

This has been Pittsburgh’s achilles heel all season.  Kris Letang (58 at the bottom of the screen) takes every opportunity to join the rush and it often leads to great offensive chances — as long as the puck isn’t turned over.  Teams with quick-transition styles like Toronto, Winnipeg and Philadelphia have given the Penguins problems.  The Leafs and Jets may not have the consistent offensive talent to finish their opportunities, but the Flyers do.

“We cannot turn the puck over in the neutral zone because they have good offensive players and they will score goals,” Michalek said.

Sidney Crosby echoed the same sentiments.  “We need to make sure we don’t turn the puck over and make a big mistake that’s going to hurt us,” he said.  “They have guys who can definitely take advantage of those mistakes.”

If the Penguins have good puck management and move it quickly through the neutral zone, they’ll have success in the series.  If you notice the Flyers regularly setting up in their neutral zone trap, it means they’re dictating the play and making Pittsburgh play their style.

It should set up for quite a series between these two talented teams.