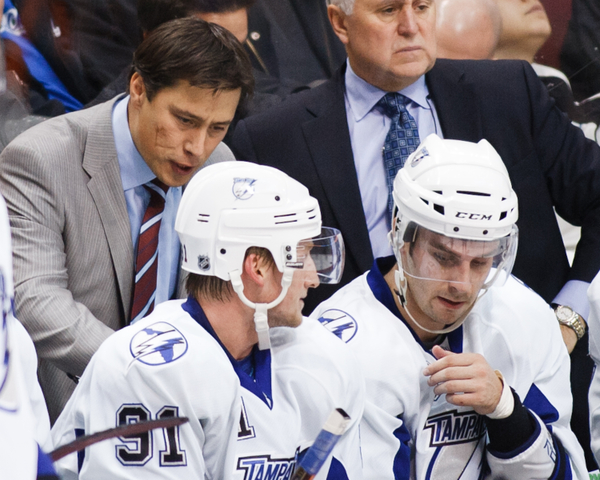 The Tampa Bay Lightning and Pittsburgh Penguins have shifted their series south.  Tonight they’ll meet in Game 3 at the St. Pete Times Forum.

If league-wide analysis of the first two games can be trusted, Pittsburgh is supposedly searching for answers after a 5-1 beatdown in Game 2 while Tampa is cruising on a wave of confidence and momentum towards a 2-1 series lead.  The box scores tell the story of a roller coaster series thus far.  Reality tells a different tale.

Last week we previewed the series by looking at the regular season matchups between the two teams and the chess match being waged by coaches Dan Bylsma and Guy Boucher.

With both teams claiming multi-goal victories and the series changing venues, now is a good time to dig deeper and look at some of the tweaks each coach has made to their gameplan.

For all the attention we gave to Tampa’s 1-3-1 strategy in the series preview, Guy Boucher and the Lightning didn’t even use it half of the time in Games 1 and 2.

In 1994-95, Bowman’s second season as head coach of the Detroit Red Wings, he caught the league by surprise with a new approach to the game.  The Wings made an appearance in the Stanley Cup Finals for the first time in 29 years and looked ready to dominate the New Jersey Devils.  The Devils and Jacques Lemaire countered with their own system though – the now notorious neutral zone trap – and surprisingly swept the Wings in four games.

Bowman and the Red Wings went back to work in the offseason.  They added Mike Vernon in goal, Russian stars Igor Larionov and Slava Fetisov, and dominated the regular season winning a league-record 62 games.  Again they were Stanley Cup favorites, but again they fell short – losing to the Colorado Avalanche in the West Finals.

It was the last disappointment they would face.  The Red Wings completely bought into Bowman’s disciplined system in the ’96-97 season and left-wing-locked their way to back-to-back Stanley Cups.  Both Finals went just four games and a dynasty was born. After the second Cup, the Conn Smythe Award for playoff MVP was given to…current Tampa GM Steve Yzerman.

The left wing lock never achieved the notoriety of Lemaire’s neutral zone trap, but any strategy that leads to a Stanley Cup predictably becomes popular with the coaching masses.

In our preview before Game 1 we said “Boucher needs to find a way to counter the transition game of the Penguins if Tampa is going to prevail in the series.” 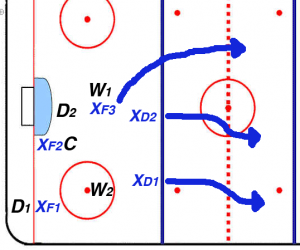 In the diagram to the right, the first two Tampa forwards (XF1 and XF2) aggressively forecheck the Penguins defensemen looking to create turnovers.  If Pittsburgh can successfully get the puck moving the other way, Tampa’s defense (XD1 and XD2) backs up as usual.

The left wing lock differs from a normal forechecking system because the third Tampa forward (XF3) also backs up with the defense.  Typically this forward ‘locks’ onto the winger on the side of the ice opposite the puck.   In this example, it’s the Pittsburgh left wing – but it works exactly the same from the other side.

By essentially becoming another defenseman, XF3 allows Tampa to divide the ice into thirds. XD1 and XD2 can be more aggressive on the puck-carrier because they don’t have to worry about a Penguins player sneaking behind them on the far side of the ice.

Aggressive play by the defensemen (‘stepping up’ or ‘maintaining a tight gap’ as you’ll often hear a coach refer to) also gives XF1 and XF2 time to get back and help out.

This system rarely allows Pittsburgh to use their speed and transition game to create an outnumbered opportunity.  It simplifies the defensive roles and limits the possibility of confusion and breakdowns for Tampa. (Limiting confusion and simplifying responsibilities is a common theme in Boucher’s systems). 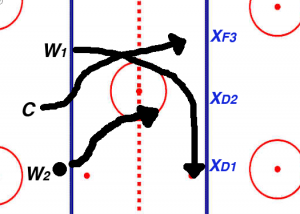 The Lightning used this strategy for much of Game 1.  They were able to keep Pittsburgh off the scoreboard for two periods before the Penguins and Bylsma began to adjust.

Tampa’s three-man defensive group moves backwards more or less as a unit.  One way Pittsburgh tried to create offensive opportunities was by disrupting the timing of the Lightning defense.

More often than not, the best attack the Penguins could muster was a 3-on-3.  In an attempt to create room for the puck-carrier, one Pittsburgh forward would take off up the ice (W1 in this example, the left wing) and drive the defense back.  With Tampa defending man-to-man, the Pittsburgh forwards also began to criss-cross and create confusion.

Shortly after Alex Kovalev put the Penguins up 1-0 in Game 1, the Penguins finally cracked the left wing lock on this goal by Arron Asham:

On the play, Mike Rupp serves as W1 and drives the Lightning defense up the ice.  At first, Tampa’s Mike Lundin (XD2) backs up quick to defend any pass to Rupp.  When Rupp continues to cross the ice and becomes Eric Brewer‘s (XD1) responsibility, Lundin realizes he’s way too far back to defend Asham coming through the middle.

By the time Lundin stops and steps up to confront Asham, he’s caught completely flatfooted.  Asham recognizes this, skates right around Lundin and goalie Dwayne Roloson and scores the insurance goal for Pittsburgh.

Expect the Penguins to do this over and over again in Game 3 if Tampa is in the left wing lock.

A 3-on-3 rush with all Pittsburgh forwards going straight up the ice is easy to defend. By driving the defense back and creating confusion via criss-crosses the Penguins will eventually get scoring opportunities.

At that point they’ll need to make sure they find a way to get the puck past Roloson – maybe easier said than done?

In Game 2, once Tampa jumped out to an early 3-0 lead they dropped back into their 1-3-1.  Unless they were in need of a line change, Pittsburgh seemed reluctant to give up possession of the puck and use the icing play we detailed in the preview.

Instead, Bylsma added a new wrinkle to the Penguins’ neutral zone attack.  (check out Wednesday’s preview if you’re not familiar with the original Pittsburgh setup). 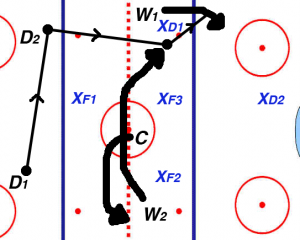 With Tampa in their 1-3-1, the Pittsburgh defensemen still passed the puck from D1 to D2.  Instead of forcing the puck to W1 – who was covered very tightly by Tampa’s XD1 – Pittsburgh’s W2 and C criss-crossed.  By the time the puck moved from D1 to D2, W2 was moving across the ice and into an open passing lane.

D2 would then fire a pass to W2 that was quickly redirected to W1 who was now moving on the attack.  This allowed Pittsburgh to still take advantage of the slow Tampa defensemen but not give up possession of the puck.

As expected, Tampa countered.  After D1 on Pittsburgh became predictable with his pass to D2, the Lightning XF3 began to cheat.  He knew W2 would be coming across the ice looking to receive a pass and started to take this passing lane away as well.

Bylsma’s turn.  With Tampa sitting back and taking away the easy passing lanes, Pittsburgh defensemen realized they had lots of open ice to take the puck themselves.  The Penguins mobile defensive unit wisely didn’t try to force a pass, but instead skated up to the red line and fired the puck around the boards and into the offensive zone.

When dumping the puck, some teams will do their best to keep it away from a goalie like Martin Brodeur.  By shooting it into the trapezoid area on each side of the net (where goalies are prohibited from playing the puck), teams can keep the puck away from Brodeur and neutralize his puck-handling skills.  At times Dwayne Roloson thinks he’s Brodeur – but he’s not.

In the first two games, a number of scoring opportunities by the Penguins were a direct result of miscues by Roloson.  By dumping the puck around the boards and behind the net, Pittsburgh was tempting Roloson to play the puck.

Craig Adams‘ goal halfway through the second period was a perfect example of the Penguins luring the goalie out of his net. 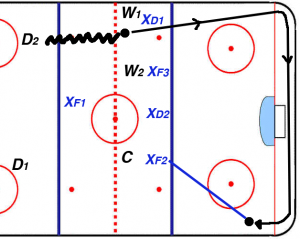 Guy Boucher had seen enough.  With about two minutes left in the second period Tampa unveiled yet another scheme.  This time it was an occasional 1-4 look to counter the Penguins strategy to dump the puck in and tempt Roloson.

In this new look, the same Pittsburgh passing lanes were taken away as the 1-3-1, but this time when the Penguins defenseman sent the puck hard around the boards Roloson was able to stay in the net.  The Tampa player on the far side where the puck was headed (XF2 in this example) would drop back and pick up the puck as it came around the net.

On and on the playbook battle goes between Guy Boucher and Dan Bylsma.  With the Lightning being on home ice for Games 3 and 4, Boucher now has the luxury of making the final move.

~ Pittsburgh’s struggles on the powerplay are well-documented.  With zero goals in 13 opportunities with the man-advantage, lots of work needs to be done.  Bylsma pointed to his powerplay unit’s entry into the offensive zone as a catalyst for its failures.

The Penguins worked on a number of new zone-entries in practice on Sunday that focused on getting the puck into the hands of the most offensively-talented players on the top unit.  We’ll break down the success/failure of these new wrinkles when (and if) they’re used.

~ Tampa Bay has done a nice job limiting second-chance and rebound opportunities by the Penguins.  They’ve adopted the same defensive zone system used by Montreal to upset Pittsburgh in last year’s playoffs that clogs up shooting lanes and the front of the net.  It’s probably not a coincidence that Boucher was the head coach of the Hamilton Bulldogs last year, Montreal’s AHL affiliate.

At times, the Lightning have gotten into trouble when they get overanxious and start chasing the puck.  Boucher will be stressing discipline and focus to his players in Game 3 amidst the excitement of the home crowd.