The Chicago Blackhawks will meet the Boston Bruins at the TD Garden on Friday evening for an Original Six battle. This matchup will mark the first meeting of the 2016-17 season between the teams. 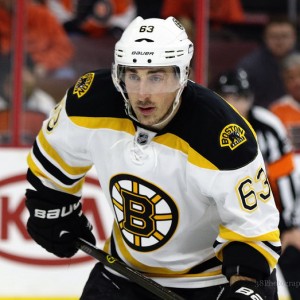 Brad Marchand has 14 points in the last eight games, including a 5-point effort against the Flyers on Jan. 14. Photo: Amy Irvin / The Hockey Writers

Both clubs are sitting in second place in their respective divisions, but their seasons are heading in different directions. Three games ago, the Bruins scored six goals in one of their best performances of the season resulting in a win versus the Philadelphia Flyers and looked ready to turn their season around.

The Bruins followed up the big win against the Flyers with subpar performances against the New York Islanders and Detroit Red Wings, two contests they lost. A win against the powerful Blackhawks could help the Bruins’ get their season moving in the right direction again.

While the Bruins struggle with inconsistency, it has been business as usual for the Blackhawks. They have tallied wins in five of their last seven matchups, including a 6-4 win against the Colorado Avalanche in their last outing.

Patrick Kane is leading the Blackhawks in scoring once again this season with 14 goals and 47 points in 47 games and has been heating up lately. In his last seven games, Kane has recorded three goals and 10 points, and will be looking to keep his hot streak going.

1) Scott Darling will be getting the start in goal for the Chicago Blackhawks. Darling’s last start came on Jan.13 versus the Carolina Hurricanes where he stopped 39 of the 40 shots he faced to help the Blackhawks capture the win. This season Darling has appeared in 20 games registering a 11-4-2 record with a 2.34 GAA and a .924 save percentage with one shutout.

2) After missing 23 games with a knee injury, Bruins’ forward Matt Beleskey will be back in the lineup. Beleskey registered a career-high in points  (37) last season, but he had a tough start to the 2016-17 campaign, going without a point in the first 10 games. In total, he has played in 24 games this season recording two goals and five points. He will skate alongside Dominic Moore and Austin Czarnik on the Bruins’ fourth line as he attempts to get back up to game speed.

3) Bruins’ forward David Pastrnak leads the team with 19 goals this season, but has not found the back of the net in his last 15 games. Although he has not been able to score, he has tallied seven assists during the 15-game goal drought and will need to start finding ways to score again if the Bruins’ hope to record more wins. Claude Julien has relegated Pastrnak to the second line with Tim Schaller and David Krejci with the hope the talented young winger can get back on the board soon.

After suffering two bad losses to the Islanders and Red Wings, the Bruins’ are desperate to stop the bleeding and bounce back with a big win. If the Bruins are going to capture a win against one of the best teams in the NHL, they will need to play a complete 60-minute game, which they have not done in their previous two contests.

Two big matchups in this game will most likely determine which team will end up victorious. The first matchup to watch will be between Blackhawks’ forward Kane and Bruins’ defenseman Zdeno Chara. The two will be on the ice together most shifts, and Chara will have the difficult task of stopping the red-hot Kane from scoring and making plays.

The second matchup to watch will be the Blackhawks’ penalty kill unit versus the Bruins’ power-play. The Hawks penalty kill has been suffering to the tune of a 75.2 percent success rate which places them 28th in the NHL. On the other side, the Bruins’ power-play is ranked 17th in the NHL but has been producing goals over the last month. At the end of the night, special teams could end up deciding which club leaves the TD Garden with a win.