Everyone loves the underdog, we root for the underdog, and in a lot of cases we all can identify with the underdog. One of the best underdog stories in the NHL is the one of 30-year-old Stephen Gionta who was undrafted after four years in college hockey and eventually signed a minor league deal with the New Jersey Devils. Playing for their AHL affiliate (Albany River Rats, Lowell Devils, Albany Devils) he played season after season (seven in all), wondering if he’d ever make it to the big show.

His first call-up to the NHL came after his brother Brian Gionta had already left New Jersey for the Montreal Canadiens as a free agent and he saw action in 12 games. Stephen then spent almost the next two full seasons back in the AHL before being brought back to the Devils for the season’s final game. Gionta scored a goal in that game and then played in all 24 playoff games for New Jersey as they came within two wins of the franchise’s fourth Stanley Cup. “He’s a guy that you know what you are going to get from him every night,” said teammate Andy Greene. “You know the type of effort he’s going to give and he’s a great teammate. He took advantage of his opportunity; he paid his dues in the minors and it’s good to see him get rewarded.”

Last season The Hockey Writers interviewed both Gionta brothers (a few days apart), asking them the same questions, but this time Stephen had the spotlight all to himself as he discussed his path to the NHL, what it was like to represent USA Hockey and which of the goals he has scored is his favorite among other things.

The Hockey Writers: Who was your favorite player growing up not named Brian Gionta?

Stephen Gionta: (Laughs) it was Steve Yzerman; just the way he played the game, he played it the right way and he is probably one of the best leaders that there ever was in the NHL.

THW: Who was your favorite team growing up?

SG: I’d have to say it was the Detroit Red Wings, because they had Stevie Y there.

THW: You played four years at Boston College, what was that experience like?

SG: It was awesome; when you’re choosing what college to go to, you hope you choose the right one (for you) and I definitely did. Coach (Jerry) York, and that coaching staff were great; I was also there with (Devils defenseman) Peter Harrold (who is a close friend). It’s definitely four of the best years I’ve had in my life. I met my wife there and everything; it was definitely a great experience for me.

THW: In 2011-12 you played one game, scored a goal, and then played every game in the playoffs. Can you put into words what that was like after 7 seasons in the AHL?

SG: It’s kind of hard to explain in words. You work so hard to get to this level, to get that chance, I play one game and they have the confidence to put you in (the lineup) in the biggest pressure situation there is in hockey – the Stanley Cup playoffs. For them to show that trust in me was unbelievable and I will always remember that.

Stephen Gionta scores his first NHL goal in the season finale against the Ottawa Senators: 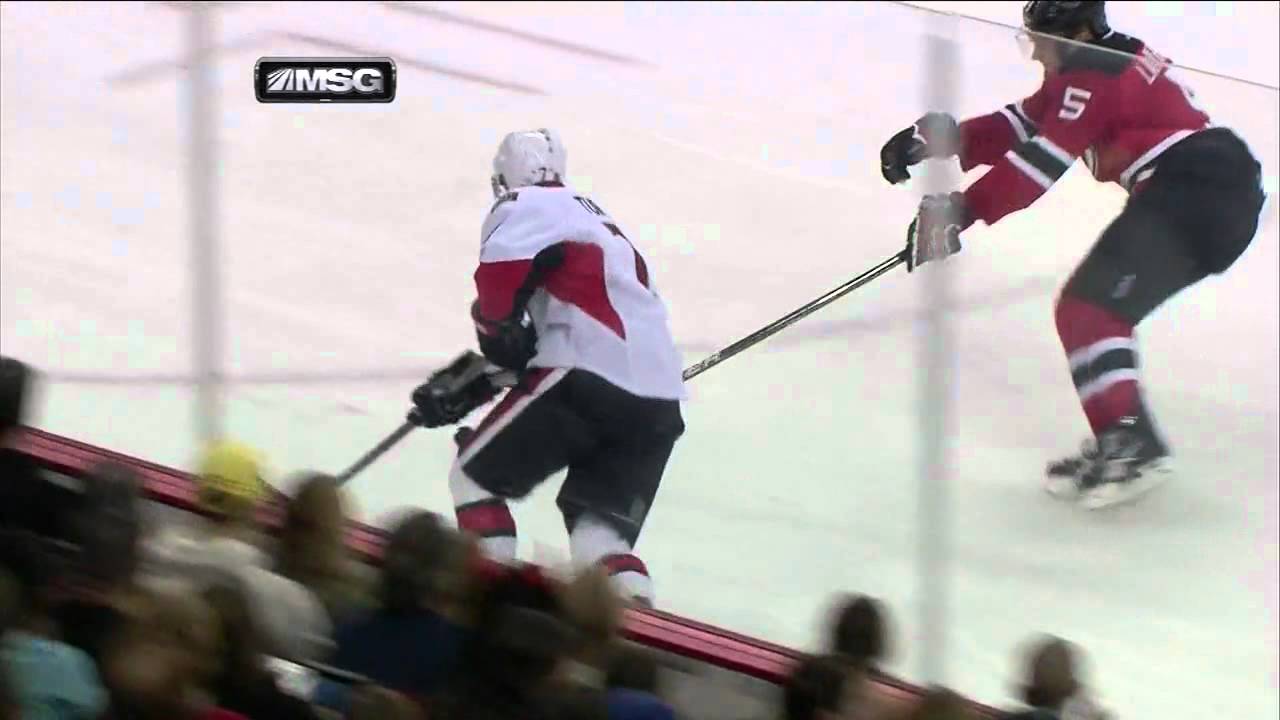 THW: You played in the World Championships after last season, how did it feel to represent USA Hockey?

SG: It was awesome; I played for the national program when I was in high school, but that was like 10-11 years ago, probably even more than that. To wear the red, white & blue was a great experience and we had a great group of guys over there and I think it showed on the ice. We were able to do some good things over there. 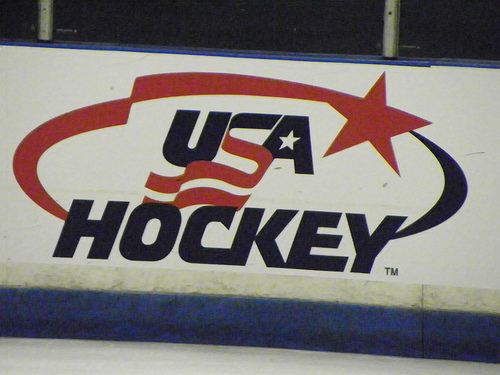 THW: One of your teammates that represented the US over there is also a teammate here in New Jersey…

SG: (Smiles) yeah Carts (Ryan Carter) was my roommate over there, so it was definitely nice to have that familiar face going in, because you never know what to expect with 25 new guys; obviously it’s just hockey. When you’re on the same team with someone you’re always going to get along, you’re always going to be close, but having Carts there, it gives you some familiarity in a new situation.

SG: Ha, ha! I actually didn’t know; I got a call a couple of weeks ago, but honestly I didn’t know that I had it. It’s not for producing the most points in a season, it’s more of a longevity thing, being there forever and accumulating it all (laughs). Obviously Whit is a great player and he’s done great things in his 2 ½, 3 years there. He got a shot to come up here and play for a bit, but it’s a testament to how he plays. A fellow BC boy so it’s always good to see that.

THW: By the way that fan that submitted the question is in Italy.

SG: Oh really? Wow! I guess they root for the short Italian guys there huh? (laughs)

THW: You have 11 NHL goals (8 regular season/3 playoffs) do you have a favorite one? Or is it all of them?

SG: My first one, you’ll never forget that. Besides that, would have to be Game 7 of the 2012 first round series against the Florida Panthers. You always dream about scoring in a Game 7, and to be able to chip in and help us win, especially in my first playoff series, that was pretty cool.

Stephen Gionta finds the puck before Brian Campbell can and gives the Devils a 2-0 lead: 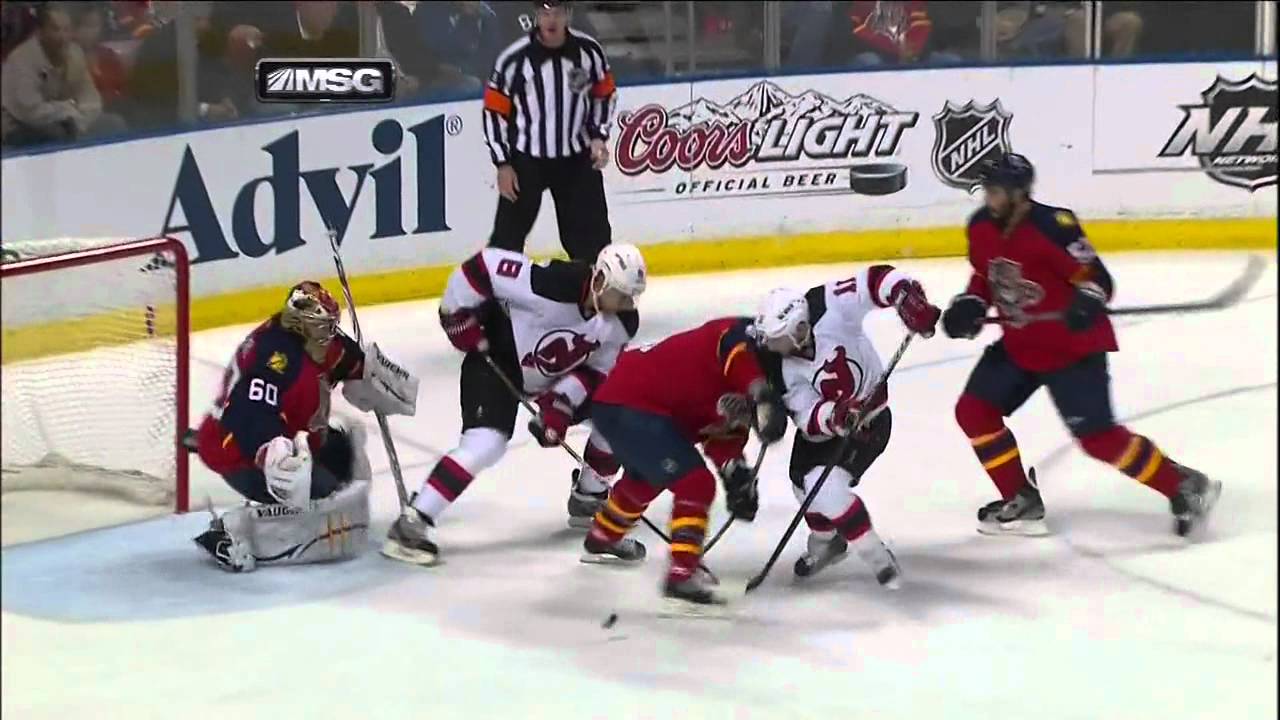 THW: What’s the strangest thing that a fan has asked you to sign?

SG: Strangest thing…I’d have to say a hand. (laughs) It’s kind of weird having to sign skin, but that’s the weirdest thing so far.