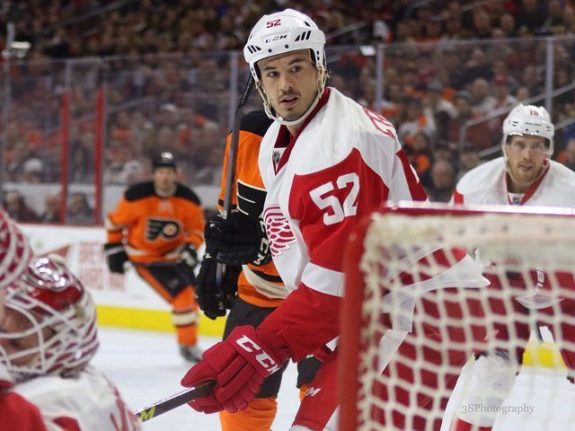 March hasn’t been kind to the Detroit Red Wings, and as a result, they are scratching and clawing for points trying to hold off Ottawa and Boston for third place in the Atlantic Division.

The Red Wings are 4-7-1 during March after a 6-4 loss to San Jose on Thursday, and the big lead they had on Ottawa and Boston slowly is shrinking.

Against the Sharks, the same problems that have been plaguing the team for the past month continued to surface.

It’s easy to look at the box scores, see all of the goals against and immediately blame Jimmy Howard, but the Red Wings’ problems go far beyond their goaltender.

The defense was the big question mark coming into the season for the Red Wings. It played remarkably well at the beginning of the season, considering general manager Ken Holland was not able to get any of the free agent defenseman he had targeted. However, the holes in the defense corp have come to the forefront during this month.

The Red Wings snagged Marek Zidlicky at the trade deadline, and he’s been a nice addition, but the problems are bigger than Zidlicky.

San Jose’s second goal Thursday was a result of poor defense. Watch as the puck goes behind the Detroit net, and Zidlicky and Riley Sheahan both go back to give chase. Brendan Smith is in front of the net like he should be, but rather than tie up Matt Nieto in front, he’s standing and watching the play, which gives Nieto all day to shoot on Howard.

It’s momentary lapses like this that have been hurting this team. The players in this league are too good to not take advantage of defensive lapses, even for a team like San Jose, which has had its fair share of struggles as well.

Interviewer: Jimmy Howard doesn't look like himself.
Hank: We're not helping him…. This is not on Howie or Petr. We have to be better.

The Red Wings were wiped out from injuries last year, and it was a big reason why they had to settle for the second wild-card position. This season, they managed to stay relatively healthy, which is why they are in third place in the Atlantic. However, the injury bug has come at the worst possible time for Detroit.

No team will use the excuse of injuries as to why it is struggling since every team has to deal with them, but it certainly is bad timing.

During a six-game stretch in the middle of March, the Red Wings scored just 11 goals or an average of 1.83 per game. During the past two games, they have been able to score four in each game, but they also gave up 11 goals combined in those two games.

These guys are the future of the Red Wings, and I realize they are still young and learning how to play in the NHL, but the Red Wings need all the help they can get at this point in the season. They’ve proven in the past they can contribute on a consistent basis, and now is the time the Red Wings need them the most.

There is No Goalie Controversy

When Mrazek took over for Howard in the second period, he didn’t fare much better when the defense in front of him started to falter.

Of the three goals Howard allowed against the Sharks, the first one alone was his fault. The video below doesn’t show the correct angle, but Howard takes too long to look around a group of players to his right, and Marc-Edouard Vlasic’s harmless-looking shot gets passed him 19 seconds into the game. That’s a save Howard should have made.

For the most part, Howard has been the bearer of some bad luck, as evidenced by San Jose’s third goal, which ricocheted off of Joakim Andersson’s skate and past Howard.

Howard doesn’t turn the puck over, Howard doesn’t leave opponents unguarded in front of the net. This is a team-wide issue and Howard is only a small part of the problem.

The Red Wings don't have a goalie controversy. They have two struggling goalies and a struggling team.