It was a season that ended in disappointment for fans of the Buffalo Sabres, their team tormented them by falling just short of the playoffs after an amazing 15-5-5 run that saw the Sabre climb from 15th all the way back to 9th! But hockey isn’t quite finished in Western New York, yes the Sabres are done but the Rochester Americans are still going. The Buffalo Sabres AHL team, pegged as “Sabres University” by Ted Black earlier this year, is gearing up for their series against the Toronto Marlies in the first round of the AHL playoffs!

The Americans finished 2nd in the North Division behind the aforementioned Marlies. For a team that lost most of their players to the NHL at some point this

season, finishing in 2nd with a 36-26-10 record is quite an accomplishment. The Amerks much like the Sabres found themselves on the outside looking in at the playoff picture and didn’t clinch a spot in the playoffs until the final day of the regular season, and just like the NHL club the Amerks had to play “playoff” hockey to end the year and perhaps have a shot at the playoffs. They solidified their spot in the Calder Cup playoffs with a 2-1 win over the Lake Erie Monsters who finished just 2 points behind the Amerks. Next up for the Amerks a much tougher task, the Toronto Marlies who they have already played 10 times this season!

In the 10 meetings during the regular season the Marlies won 7 while the Amerks were only able to steal 3. But every single one of the 10 games was decided by just 1 goal, 4 of the games went to OT and one went the distance and had to be settled by a shootout! (Talk about a close rivalry) It appears that the rivalry the Sabres and Leafs have, is trickling down to their respective junior clubs!

The Amerks 224 goals for, lead all Western Conference playoff teams but they’re facing a Marlies team that allowed a league low 175 goals against and goaltender Ben Scrivens who went 21-15-1 this season. Sabres fans may remember him as the goalie the couldn’t beat in the game that more or less sealed their playoff disappointment. It will be the high scoring team from Buffalo against the tight defensive team from Toronto, should work out to some more low scoring, tight games!  Luckily for the Amerks the Sabres failed to qualify for the playoffs meaning reinforcements got sent in to Rochester. In addition to Luke Adam who was sent down from Buffalo to regain his confidence, Marcus Foligno, Corey Tropp and Brayden McNabb are among 10 players on the roster to have played for the NHL club, hopefully Foligno’s 6 goals and 14 points will help carry into the playoffs and give him all the confidence he needs to score and lead the Amerks to the next round!

Perhaps the underdog that will pack a nasty bite, is the surprise play of Amerks goalie, and Buffalo native, David Leggio. Although he hasn’t been solid all season long he does have the ability to completely shut down the opposing team at any given time, he’ll have 3 or 4 poor showings and then come back with some stellar games that turn people’s heads. Leggio was named the teams MVP and set career highs with 28 wins and 54 games played, so if he catches fire this series should be lights out for the Marlies. 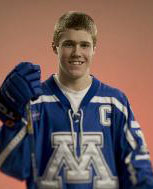 The Marlies don’t have 1 difference maker they have several, all NHL recruits that spent a majority of the season with the Leafs; Jake Gardiner, Matt Frattinand Jay Rosehill are three players that will pay major dividend on the Marlies powerplay. Most notable Gardiner had the most impact this season with the Leafs, having played the majority of the season in the NHL, he’s turned into a leader of sorts and may help calm down the young Marlies.

Simply put and like most playoff series it will come down to defense and goaltending. These two teams are so close in skill that if Scrivens or Leggio falters, the series may and likely will be over for their team. A lot in the playoffs relies on goaltending, just look at the Pittsburgh Penguins, they have all the talent in the world but had gotten some shaky goaltending and found themselves in a 3-0 series hole. In the AHL there’s that much more pressure placed on the goaltending especially when you consider this is a best of 5 series, one bad game could spell the end!

The Amerks know this is going to be a battle against the Marlies in the first round, but if they do manage to come out of the series on top they may have what it takes to go all the way to the Calder Cup finals. They have not been to the championship since 1999, could this be history in the making for the Rochester Amerks?
Just remember all of these guys could be wearing a Buffalo Sabres uniform one day!

3 thoughts on “Rochester Americans Gearing up for the Playoffs”