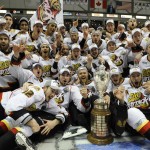 OHL Hockey is back and I believe it is better than it has ever been as the league welcomes plenty of NHL draftees from other leagues and some young new rookies that should excite OHL fans.

For the 2011-12 OHL season, I will be featuring a weekly article (released Monday or Tuesday) dubbed “Rossy’s OHL Rundown” highlighting key moments and articles from around the OHL.

STAR POTENTIAL FLOCKING TO THE OHL

As mentioned above, the Ontario Hockey League welcomes several high profiled NHL prospects and their presence will surely bring a whole new level of excitment to the games this season.

New to the Ontario Hockey League? Has summer caused you to become out of the OHL loop?  Do not worry, check out my recent article previewing the OHL’s Western Conference to catch up on who to watch this upcoming season.

The OHLProspects.blogspot.com website has an interesting interview with three CHL experts on their predictions within the OHL.  Dominic Tiano, Neate Sager and Patrick King weigh in with their thoughts on who is the OHL’s Top Scorer this season, their top 2012 NHL prospect, and the most underated OHL teams.

2012 DRAFT ELIGIBLE PLAYERS IN THE OHL

The OHL is privileged to have the number of top notch 2012 NHL draft eligible players competing in their draft years in our own backyards.  These are some of the favourites entering the season along with a snippet of how their first few games have went.

Andreas Athanasious (London Knights) – The expectations of Athanasious have been raised after a strong summer and while he’s notched 1 assist in two games, Andreas will become an offensive leader for the Knight’s throughout the season.

Cody Ceci (Ottawa 67’s) – Ceci has started the season very well as he’s showing that he could be a force to be reckoned with.  After two games the 6’3” blueliner has a goal and two apples (a.k.a. assists).

Nick Ebert (Windsor Spitfires) – The young American is showing why he could become a top ten pick as the reliable defender plays the game flawlessly.  Ebert replaces the departed Ryan Ellis as the team’s defensive leader and has a couple of assists early in the season.

Matt Finn (Guelph Storm) – The Storm needs the next generation to step up and Matt Finn is one of those players.  Finn has great defensive awareness and is extremely dependable stopping the opponents best players but he has shown some offensive flare early on scoring a goal and adding three helpers for four points in three games.

Alex Galchenyuk (Sarnia Sting) – Currently nursing a sore knee, Galchenyuk missed the Sting’s first two games but is expected back for the back-to-back home games and it’s likely the young American will be itching to help his teammates get their next big win.

Brendan Gaunce (Belleville Bulls) – Gaunce is a personal favourite of mine to rise up the draft charts as each rankings are released.  The large 6-2, 212 pound forward is off to a great start scoring a goal and an assist in two games.

Scott Kosmachuk (Guelph Storm) – With the departure of several key veterans, the Storm need Kosmachuk to step up in his draft year to carry the load offensively.  To date, Kosmachuk has succeeded with that task notching three goals in three games.

Scott Laughton (Oshawa Generals) – Another personal favourite to rise throughout the season, Laughton brings nice package of skills to a deep Oshawa team.  Laughton has a couple of assists and has his first fight under his belt in only two games.

Jarrod Maidens (Owen Sound Attack) – Maidens is expected to become a player that NHL teams covet as his size and complete game is a rare combination.  Maidens enters week two with two points in his first three games (1G, 1A).

2013 DRAFT ELIGIBLE PLATERS IN THE OHL

There will be several 2013 eligible OHL players competing for the 2013 NHL Entry Draft’s top spot in two years’ time.  Nathan MacKinnon highlights the top talent from the QMJHL (currently has 2G, 10P in 6GP) and Seth Jones the best of the WHL but these following OHLers will be right there competing.

Max Domi (London Knights) – Domi impressed in his debut game where him and fellow first round pick Bo Horvat (9th overall one ahead of Max Domi) showed their amazing chemisty.  Horvat scored a hat trick (3 goals) and added an assist in his first game.

Sean Monahan (Ottawa 67’s) – Monahan will miss the 2012 cut-off date, so the 6-2 center will become one of the favourites in the 2013 draft.  Already with two goals and five points in just two OHL games, Monahan currently leads the 67’s in scoring.  The Brampton native is one of my personal favourites for the ’13 NHL Entry Draft.  Bookmark this name.

Nicolas Ritchie (Peterborough Petes) – The big winger and brother of Sarnia’s Brett has the scoring touch to compete for the OHL’s top rookie.  The combination of size and skill makes him a prospect that many NHL teams will covet.  Ritchie has scored in both of his two OHL games and is off to a great start.

Darnell Nurse (Sault Ste. Marie Greyhounds) – The Pronger-esque defenseman has only played in two OHL games but this kid has all the skills to become a top prospect for the ’13 draft.

Jordan Maletta (Windsor Spitfires) – Maletta is a big pivot that really impressed me when watching Windsor’s 2-0 win over Sarnia.  He has the ability to frustrate the opponent and does all the little things extremely well. Smart player.

Almost two years ago, Ben Fanelli went through an almost fatal experience as he was hit awkwardly into the boards causing severe head trauma in just his ninth OHL career game.  Remarkably, Ben Fanelli rejoins the Kitchener Rangers to continue his OHL career.

Nicklas Jensen (Vancouver Canucks) – The smooth skating Oshawa Generals forward has not looked out of place.  Jensen is expected to travel with Vancouver for a few west coast games but it is expected that Jensen will be returned to Oshawa by the weekend.

Ryan Murphy (Carolina Hurricanes) – The offensive rearguard for the Kitchener Rangers is doing exactly what he is suppose to with the Carolina Hurricanes.  Murphy has played very well creating offensive chances and performing well defensively as well.  With the depth of the Hurricanes’ defence, Murphy will likely return to Kitchener but do not completely right him off from playing in the NHL this season.

Brandon Saad (Chicago Blackhawks) – The Saginaw Spirit has outlasted first round picks Mark McNeil and Philip Danault and remains with the Blackhawks after impressing Hawks; coach Joel Quinneville.  Prospects writer and OHL guru, Brian Huddle, has reported hearing that Saad might just stick with the big club in Chicago.

Ryan Strome (New York Islanders) –  The Islanders have kept the Niagara Ice Dog center around for an extended look and it personally would not surprise me to see Ryan remain on the Island for at least nine NHL regular season games .  Do the New York Islanders need Ryan Strome this season?  Probably not but he certainly would not hurt their chances of success.

The Ontario Hockey League has announced that Tanner Pearson of the Barrie Colts is the first recipient of the 2011-2012 OHL Player of the Week Award.  The Colt forward notched an impressive five goals and eight points in two OHL games leading the Barrie Colts to a 2-0 record.