June 19, 2017, will go down in Coyotes history as being a controversial day. The Arizona Coyotes made the decision to not offer Shane Doan the 21-year veteran a contract for the upcoming season. The Coyotes have never played a season without Doan who has the been the cornerstone of the organization. In a year filled with plenty of firsts in the NHL with a new team in Las Vegas and Adidas jerseys, the Coyotes will have a new captain in Oliver Ekman-Larsson.

Doan has been the best player in Coyotes history, holding almost every record a forward can hold for a franchise. Doan has been the face of Arizona hockey for more than 20 years and it is with great sorrow that the fans will enter the arena knowing that “Captain Coyote” will not be on the ice in a Coyotes sweater.

Doan was drafted by 1995 the Winnipeg Jets, he was selected seventh overall behind players like Steve Kelly and Bryan Berard who was selected first by the Ottawa Senators. No fan or player knew it yet, but the Coyotes selected one of the most loyal players in the NHL.

Doan played the very next season for the Jets where he scored seven goals and picked up 10 assists. The strong power forward did not have the best rookie season, but with hard work, he greatly improved his numbers over the next 20 seasons.

The Winnipeg Jets became the Phoenix Coyotes the following year, where Doan found his home in the desert. Doan, now part of the Coyotes continued to play his game and eventually, his points totals began to climb. The 1999-00 season Doan reached the 20 goal mark for the first time in his career. This was the first of many times, including nine straight seasons with at least 20 goals.

Doan’s offense progressed as he got older, being guided by players like Jeremey Roenick, Kieth Tkachuk, and Mike Gartner. The lowest points total for Doan since the 1999-00 season was 49 until the NHL lockout in 2013 where he tallied 27. 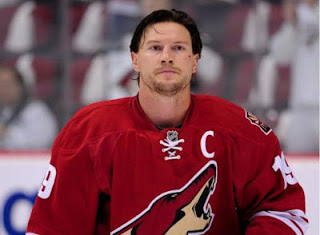 Doan became the captain of the Coyotes before the start of the 2003-04 season. This high honor is given to a leader on and off the ice. Doan went on to put up the highest points total of his early career with 68, including 27 goals. Doan was named to the Western Conference all-star team for the first time in his career where he represented the Coyotes.

The offense was not done growing for Doan as he returned in the 2004-05 season with a 30 goal year, the first time he reached this mark in his professional career. Doan also collected 66 points that season while playing in all 82 games. He became more a leader on the ice as well as a fan favorite that ignited the crowd every time his skates hit the ice.

Doan continued to be a strong representation of what hockey is in Arizona where ice is hard to find. He was rewarded with a five-year contract extension towards the end of the 2006-07 season worth $22.75 million. The following season Doan put up his best single season points total in his career with 78. Doan also, collected 50 assists that season, the most he has ever had in a single season.

2007-08 season Doan continued to be a great player for the Coyotes as he picked up his career-high 31 goals. He returned to the All-Star Game for the second time in his career. Doan collected 71 points that season for his second straight 70+ point season, a number he has not reached again.

Leading the Team to Victory

The 2009-10 season saw the Coyotes make it to the playoffs where they would compete against the Detroit Red Wings. It was a hard-fought series the Red Wings took seven games. Doan scored one of the most memorable goals in Coyotes history, that became known as the howling Doan goal. Doan scored to tie the game up late, when the cameras showed him he was against the glass with full of excitement. This all happened while the Coyotes goal horn went off which made a howling noise.

The Coyotes returned to the playoffs during the 2010-11 season, playing the Red Wings in the first round again. The series ended up being a blowout and the Coyotes were swept out in four games. This caused some changes to the players including the addition of goalie Mike Smith.

The 2011-12 season was the Coyotes best season, as they charged into the Western Conference finals to face the L.A. Kings. The Coyotes led by Doan made it past the Chicago Blackhawks in six games. Doan then led his team into Nashville where they made quick work of the Predators in five games. The Coyotes lost in five games to the Kings in a controversial series, that had Doan upset. During the final handshake line, Doan and others players had some choice words for a few of the Kings players.

A Leader in the Rebuild

The Coyotes have not returned to the playoffs since the 2011-12 season, but one thing that was always consistent was Doan. He led his team onto the ice for almost every game, playing hard to make it back to the playoffs.

Doan has said several times that he stayed with the team because they drafted him and signed him to win a Stanley Cup and the team has yet to do that. With the rebuild looking to be at its end, it is unfortunate that fans will never know what could have been if he was able to stick around another season.

Doan holds many franchise record including games played with 1540, goals 402, assists 570 and points with 972. The Coyotes fans have always looked to Doan as a role model and someone who would be honest with them. Doan was there when the team was going through bankruptcy before there were owners other the NHL. He was there when the team was unsure where they were playing in Arizona.

Doan was on the ice almost every night in a Coyotes uniform where he played his hardest and tried to give the team a chance to win. Fans knew they had one of the best captains in the NHL, one of three ever for the Coyotes and the longest in team history.

There are very few words to express the current emotions of the Coyotes fan base. All of us can say from the bottoms of our hearts thank you, Doan. The player that proved to the rest of the world that hockey belongs in the desert.

I am a college student in Arizona covering the Arizona Coyotes. I have spent most of inaugural season covering the Tucson Roadrunners. I am the operations coordinator for my university’s hockey team where I coordinate the games as well as fan experience.