Smith, who is regarded as a high-end offensive defenseman, is a silky smooth skater who moves effortlessly. He also has very good vision and soft hands, which complement his overall mobility very well.

Hockey’s Future proceeded to grade him as an 8.0 prospect with a level “B” probability of success. The 8.0 translates to a No.2 defenseman and the “B” rating means that Smith should reach his potential but could drop one rating to 7.0, which is a No. 3-4 defenseman. Coming out of Wisconsin you could easily see why Smith would garner such praise. Smith’s junior season saw him tally 15 goals and 52 points in 42 games, finishing as a finalist for the Hobey Baker Award, which is given to the top NCAA player.

Fast forward to present day and we see that Smith has struggled to live up to the hype. He’s 26 years old with 180 NHL games under his belt and he has just 10 goals and 45 points in those games. The more concerning part is that in Smith’s first 48 games, he recorded one goal and 15 points, or an average of 1.06 points/60 minutes. In his last 132 games, Smith has scored nine goals and 30 points, or an average of 0.75 points/60 minutes. At the end of this season, Smith will become a restricted free agent With the improved play of Kyle Quincey, and the emergence of Danny DeKeyser, Xavier Ouellet, and Alexey Marchenko, is it time for the Red Wings to part ways with Brendan Smith?

When I first brought up the idea of the Wings dealing Smith’s rights in the offseason, a commenter on Twitter brought up Smith’s Usage Adjusted Corsi Against/60, and showed how his mark is 6th best in the entire NHL over the last two seasons. Here is his full graph courtesy of Own The Puck and Domenic Galamini. 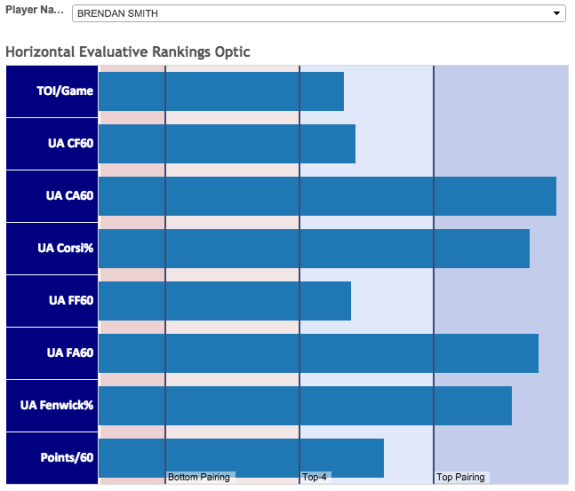 The numbers that have “UA” in front of it mean that those statistics have been adjusted for zone starts, quality of teammates, and quality of competition. Essentially, it’s how well does a player drive possession within his team’s overall style of play. You’ll see that his Usage-Adjusted Corsi Against/60 and Usage Adjusted Corsi% are both of a top pairing defenseman. He appears to excel at shot suppression. However, how much of his “shot suppression skills” are Smith’s abilities as opposed to Mike Babcock’s system?

In their limited time with the big club, both Alexey Marchenko and Xavier Ouellet have excelled. Many Wings fans are undoubtedly excited about how good both of these young prospects can be. Below is a table showing their combined stats vs. Brendan Smith this season.

You can see that the combination of Marchenko/Ouellet has at least matched what Smith has done this season with similar levels of teammates and zone starts. However, I will have to caution you that it’s sometimes easier for players to play well in their initial call-ups as most NHL teams don’t have full scouting reports on them. In Smith’s 14 game stint in 2011-2012, t the 22-year old scored one goals and seven points with a 5v5 CF% of 60.7%. He looked like a future all-star but has not progressed as originally predicted. Who’s to say that Marchenko and Ouellet continue to develop at their current rate?

In the week leading up to the deadline, all the hype was surrounding a potential deal between the Detroit Red Wings and Toronto Maple Leafs for Leafs captain Dion Phaneuf. Fellow THW Contributor Devin Slawson noted that Phaneuf is a player the Leafs need to move. Slawson mentions that Phaneuf has received a bad reputation from the Toronto media and is not as bad a player as he is made out to be. TSN’s James Mirtle further stirred the pot and piqued my interest when he tweeted out the following:

So the idea of Brendan Smith in a potential Phaneuf trade… discuss amongst yourselves.

In the initial framework of the deal, it was rumored that the Red Wings were interested in trading Stephen Weiss and Toronto wanted Brendan Smith as part of the deal. If the Red Wings do revisit the deal this offseason, do you make a Brendan Smith + Stephen Weiss for Dion Phaneuf, assuming the Leafs take back at least ~$2 million in salary as was rumored to be a request from Ken Holland? If the Wings do make this deal and trade Smith’s rights to the Leafs, the defensive corps could look like this for the 2015-2016 season: Niklas Kronwall – Jonathan Ericsson Danny DeKeyser – Kyle Quincey Dion Phaneuf – Alexey Marchenko/Xavier Ouellet I have no idea how the pairings are going to actually look and Jonathan Ericsson being a top-pairing defenseman is still mind-boggling to me, but that needs to be saved for a different discussion.

Is this a significant improvement considering the price tag ($7 million cap hit) and duration (through 2018-2019) on Phaneuf’s contract? I personally believe that if Holland can get the Leafs to take at least $2 million a season of Phaneuf’s contract, then this is a deal the Wings should make. I would also like the Wings to move Jonathan Erics- wait I said I wasn’t going to revisit this topic. Regardless of the finish this season, Detroit will have a busy offseason. Smith is a restricted free agent, newcomer Marek Zidlicky will be a free agent, and the Wings will have several tough decisions to make. The decision to retain Smith will be a tricky one for the Red Wings. In the prospect pool, you have Alexey Marchenko, Xavier Ouellet, Nick Jensen, Joe Hicketts, and Ryan Sproul all chomping at the bit. Marchenko and Ouellet have made such an impression this season that it will be tough to send one or both of them back to the minors for another season.