As for the Eastern Conference Final, 30 of us selected the Pittsburgh Penguins to return to their second consecutive Stanley Cup Final. However, the majority of us believed this series would go six games. Only two of us thought this would go seven games (Jeff Seide and Jeff Yerger). In fact, both Jeff Seide and Jeff Yerger were the only two of the 39 of us to accurately predict both Conference Final matchups. 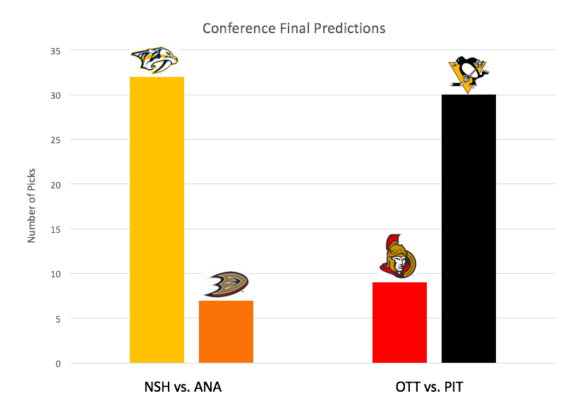 The 2017 Stanley Cup Final will consist of a matchup between the Central Division’s Nashville Predators and the Pittsburgh Penguins of the Metropolitan Division. 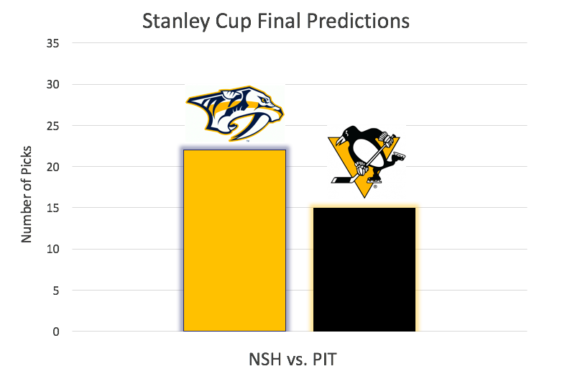 The Nashville Predators finished the season as the second wild card seed in the Western Conference with 94 points (41-29-12). As such, the Predators played up through their own Central Division starting with the first-seeded Chicago Blackhawks. The Predators started the playoffs by sweeping the Blackhawks. They moved on to play the second-place St.Louis Blues, who they defeated in six games. Lastly, the Predators faced the Anaheim Ducks, who finished first in the Pacific Division, in six-game series before qualifying for the Stanley Cup Final.

The Pittsburgh Penguins accumulated 111 points (50-21-11) in the regular season, which landed them in second place in the Metropolitan Division. The Penguins first matched up against the Columbus Blue Jackets, who they ousted in five games. Then the Penguins faced the Washington Capitals in the semifinals, which lasted seven games. In the Eastern Conference Final, the Penguins battled the Ottawa Senators in a seven-game series. After winning Game 7 in double overtime, the reigning Stanley Cup champions are looking for a repeat.

The Predators and Penguins met twice in the regular season, with each team winning once. The first game went to the Predators in Nashville, 5-1, on Oct. 22. In their rematch on Jan. 31, the Penguins won the game 4-2.

In analyzing this matchup, the offenses of the Penguins and Predators can be compared from the regular season. Overall, as a team, the Penguins had a very slight edge on the number of shot attempts they created in the time they played this season (58.75 to 58.61 Corsi-for per 60 [CF60]). Viktor Arvidsson led the Predators’ skaters with a 68.95 CF60, while Sidney Crosby led his team with a CF60 of 67.79.

Arvidsson had a breakout year this season, which ended with 61 points (31 goals, 30 assists) in 80 games, making him the leading scorer on the Predators in the regular season. Ryan Johansen also earned 61 points, but did that in 82 games. Behind Arvidsson and Johansen were Filip Forsberg (58 points), Roman Josi (40 points), and Mike Fisher (42 points). Josi led the defense with 49 points (12 goals, 37 assists). P.K. Subban earned the second-highest point total on defense (40 points), while Ryan Ellis trailed with 38 points.

After analyzing their offense, their defenses must be considered as well. The Predators were able to limit more shot attempts against (55.51 to 58.41 Corsi-against per 60). Subban’s low 50.52 Corsi-against per 60 (CA60) was the best on the Predators. Tom Sestito technically had the lowest CA60 on the Penguins of 51.78, but he only appeared in 13 games. Other than Sestito, Letang had the lowest CA60 of 53.6. 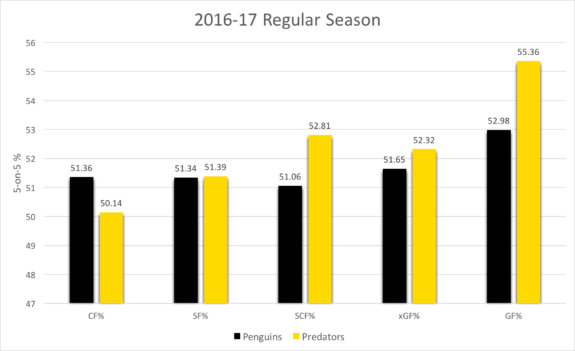 The Penguins finished the regular season with the third-most successful power play (23.1 percent), while the Predators ranked 16th (18.9 percent). As for the penalty kill, the Predators’ was slightly better (80.9 percent) than the Penguins’ (79.8 percent).

Both teams are dealing with a number of injuries. The Penguins have been hampered by injuries throughout the playoffs. Letang did not participate in the playoffs at all this season, as he needed surgery to repair a herniated disk in his neck. Patric Honrqvist is a game-time decision for Game 1 because of an upper-body injury. Chad Ruhwedel has a concussion and Kuhnhackl has a lower body injury; it has not been established if either will be able to return for Game 1.

The Predators lost both Kevin Fiala (broken femur) and Johansen (acute compartment syndrome) in the postseason after having key roles in their playoff games. Fisher suffered a laceration near his eye but is likely to play Game 1. Craig Smith has a lower-body injury and it has not been determined if he will play.

The Stanley Cup Playoffs are sometimes referred to as a second season for teams and players. Therefore, it is important to not only look at their regular season accomplishments, but their playoff performances as well.

Starting again with their offensive generation, this data notes the Penguins’ first 13 games and Predators’ first 12 of the playoffs.

The Penguins’ offensive generation has been surprisingly low. Their CF60 in their first 13 games is the second-lowest of the playoffs (49.52), ahead of only the St. Louis Blues. The Predators is more favorable at 57.48.

The Penguins’ defense has not been as strong in the postseason either. They have allowed the most shot attempts against in the time they have played (highest CA60 of 68.27). The Predators have limited their shot attempts against, as demonstrated by their lower 55.07 CA60. The Penguins also have the highest SA60 of 34.85 in the postseason. Meanwhile, the Predators’ is more favorable at 29.24. Also, the Penguins’ xGA60 is higher than the Predators’ (2.83 to 2.27), as is their GA60 (2.48 to 1.61). 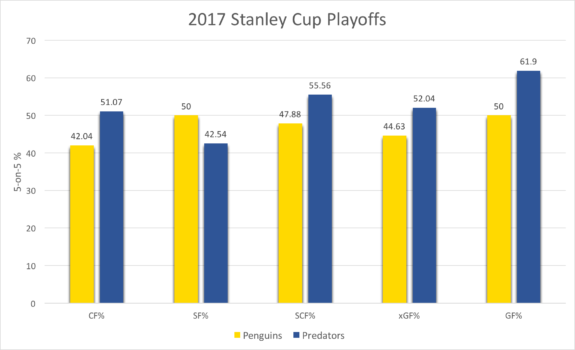 Thus far in the Penguins’ 19 playoff games, Malkin is their leading scorer with 24 points (seven goals, 17 assists). Behind Malkin are Crosby (20 points), Kessel (19 points), and Guentzel (16 points). Schultz is fifth in scoring with 10 points in 15 games and leads the defense, as he did in the regular season. Maatta follows Schultz on defense with seven points.

As for the Predators, Forsberg is their leading scorer with 15 points (eight goals, seven assists) in their 16 playoff games. Johansen collected 13 points in the 14 games he played. Ellis has earned 11 points, while Colton Sissons, Arvidsson, and P.K. Subban have each scored 10 points.

Pekka Rinne of the Predators appeared in 61 regular season games, going 31-19-9 with a .918 save percentage and a 2.42 goals-against average. At five-on-five his save percentage was .929 and he had a goals saved above average mark of 5.3.

Marc-Andre Fleury, who was relegated to playing backup this year, appeared in 38 regular season games (18-10-7). In those games, he accumulated a save percentage of .909 and a goals-against average of 3.02 in all situations. During the regular season at five-on-five, his save percentage was .917 and his goals saved above average was 4.27. 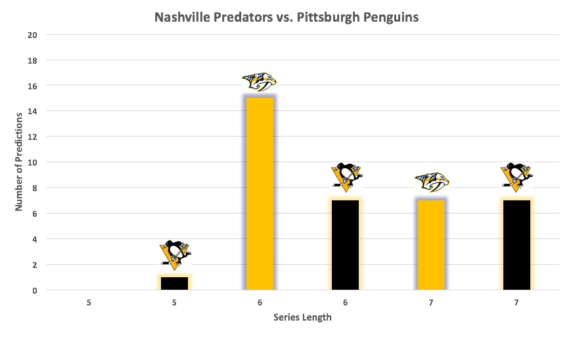 *All five-on-five data sourced from Corsica.hockey.