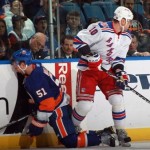 Tonight the Islanders and Rangers will meet for the fifth time this season.  The two teams could not be any further apart in the NHL spectrum.  The Rangers are currently the top team in the Eastern Conference with 81 points and seem to be rolling along to claim the #1 seed for the playoffs.  Meanwhile, the Islanders are tied for 13th in the conference with 58 points and seem to be destined for yet another lottery pick in this summer’s draft.  However, no matter where these two teams figure in the standings, it will always be one of the best, if not THE best, rivalry in sports.

The all time regular season record in the Battle of New York favors the Broadway Blueshirts.  They are 115-99-19-5 all time against the Islanders, although the majority of the 40 years of this rivalry has always been close.  But the reason that makes this rivalry so great is that they are the only two pro sports teams to share a city and play in the same division.  Well, you can argue the Devils-Rangers and Knicks-Nets, but the Devils and Nets are New Jersey teams.  Oh, and there is also the Lakers and Clippers in LA, but it’s basketball and it’s LA, so does anyone really care about that?  Hockey is a sport built for rivalries.  The fact that these two teams play each other six times a year and share territory among their fan base is what makes it so great.

If you have ever attended an Isles-Rangers game at either the Garden or the Coliseum you will know exactly what I mean.  First off, it is usually the only time each year the Islanders actually sell out.  Sadly enough, 40-50% of the fans in attendance are Rangers fans.  But that just makes the environment that much better.  It starts with the chant’s between fan bases.  In the early 90’s you had the ever famous “1940!” chant from Islanders fans directed at the fact the Rangers hadn’t won a Stanley Cup in 50+ years.  The Rangers Cup Run in 1994 sadly put an end to that.  In the late 90’s it was the Rangers turn to mock the Islanders with their “We Want Fishticks” chant which poked fun at the Islanders new logos that strongly resembled the Gorton’s fisherman.  To this day, if you go to Madison Square Garden (even if the Islanders are not playing) you will hear a chorus yelling “Potvin Sucks!”, referring to Islanders Hall of Fame d-man Dennis Potvin.  He retired in 1988.  And at the Nassau Coliseum, you will often hear Islanders fans whistling the tune to the “Chicken Dance” and ending it off with a hearty “Rangers Suck!”.  As you can see, the fans certainly are into the rivalry.  To that point, there are often more fights in the stands then there are on the ice.

That doesn’t mean on the ice these two teams are chummy.  In the 40 years of the Islanders existence, they have met the Rangers in the playoffs 8 times, the last of which was in 1994 when the Rangers swept the Isles in the first round en route to hoisting the Stanley Cup.  The reason for the Rangers’ fans hatred for the aforementioned Denis Potvin is a result of an incident where Potvin broke Rangers’ Center Ulf Nilsson’s ankle.  They have not forgotten.  There was also Theo Fleury flapping his wings like a chicken at Islanders defenseman Eric Cairns after a scrum.  The Islanders faithful reacted with the “Crachkead Theo!” chant for the rest of Fleury’s stint in New York.  The rivalry has seen many full-ice brawls where even the goaltenders have thrown down.  Rangers goalie Dan Cloutier once beat down Isles goalie Tommy Salo and proceeded to taunt the Islanders bench afterwards.  Several years later in a pre-season game, Rick DiPietro returned the favor by pounding on Rangers goalie Al Montoya.  Ironically enough, the two are now teammates on Long Island.

I can go on about all the off-ice and on-ice incidents between these two franchises.  However, words can not do the rivalry justice.  If you go to a game between these two teams you will just feel the hatred in the air.  It doesn’t matter where they are on the standings either.  Because for 6 times a year, Islanders fans can at least feel like they are playing meaningful games (which doesn’t happen too often anymore).  Tonight will hopefully be no different.  The Islanders are hanging on by a thread to their playoff lives, so there is some importance to this game.  For the Rangers, they will just be looking build upon their lead in the Eastern Conference.  And the Islanders and theirs fans would love nothing more to derail them from their goals.

Joe is a graduate of Hofstra University and die-hard Islanders fan covering the New York Islanders for The Hockey Writers. Playing hockey for many years and watching the sport all his life, Joe is devoted to the game of hockey.

1 thought on “The Battle of New York: Islanders/Rangers”