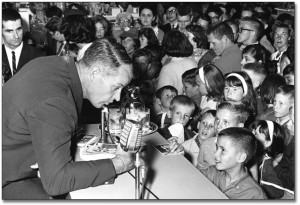 Hockey lore has long held that the crucial component for any championship team is a heavyweight scoring line, a lamp lighting juggernaut that consistently threatens the oppostion at even strength and absolutely dominates on the powerplay. From Lemaire, Shutt & Lafleur with the Canadiens to Trottier, Bossy & Gillies with the Islanders, to Gretzky, Kurri & Tikkanen with the Oilers, the dynastic teams of the 70’s & 80’s were inevitably led by a triple threat line widely acknowledged as the best of its era.

In the 90’s however, the game evolved and Stanley Cup winning squads became notable for more balanced scoring throughout the lineup. In particular, the ascent of a one-two punch from the scoring lines became prevalent with dynamic duos such as Forsberg & Sakic, Zetterberg & Datsyuk, and now, Crosby & Malkin, leading their teams to victory.

Despite recent history however, the mystique of the ‘Top Line’ still endures. And while it’s debatable whether the title of “The NHL’s Top Line” still guarantees a Stanley Cup Championship, it certainly remains a hotly contested moniker as evidenced by the following contenders for this year’s title.

Factor in Heatley’s goals from last year alongside Thornton’s and Setoguchi’s and it’s easy to see why Sharks’ GM Doug Wilson is expecting this trio to be as productive as any in the league. In an off year, Heatley still netted 39 goals last season. Partnered now with Thornton, the NHL’s premier setup man, 60+ goals are a distinct possibility for Ottawa’s Public Enemy No. 1. The X Factor is Setoguchi who enjoyed a breakout season last year with a career high 31 goals and 65 points. If the young right winger can continue to elevate his game and all three can achieve the right chemistry, this line has the ability to score over 120 goals. Of course, it will all be for naught if the line fails to deliver in the clutch with Shark fans desperate for their talented team to deliver a deep playoff run.

Ranking
While San Jose’s top line has the potential to be the top point producer of any line in the NHL, all 3 have pulled disappearing acts in the playoffs and doubts persist about their ability to contribute when it counts most. Is the Sharks’ top line a man eater or a bottom feeder living off regular season scraps? I think it’s the latter and until they prove they have what it takes to swim with the big fish, I’m ranking them 5th overall.

5th Best Line in the NHL

For many hockey fans, particularly those on the east coast, it came as quite a surprise when the Canucks’ announced the resigning of their Swedish Super Siblings for a hefty price of $30.5 million each. It shouldn’t have. Playing on the west coast means the Sedin’s were two of the best kept secrets in hockey, but the secret’s out now. After Daniel and Henrik finished 14th and 15th respectively in the 08/09 scoring race, the twins followed it up with an impressive post season run, both notching 10 points each (4G, 6A) as the Canucks followed an unexpected Northwest Division title with a first round dispatch of the St. Louis Blues.

Most importantly, after numerous experiments, the Canucks’ clones finally have a linemate of like mind with the emergence of speedster Alex Burrows who potted 28 goals on the Sedin’s right flank. In addition to the goals, Burrows brought a much needed toughness and two way influence to the Sedin’s game as reflected in the trio’s collective plus/minus of +89, a total that far exceeds any other top line in the NHL.

Ranking
Young, talented, and dominant at both ends of the ice, Vancouver’s top line flies low under the NHL’s radar while wreaking havoc on enemy defenses. If Burrows can build on a breakout season and the line as a whole can add a few more goals to their already impressive totals, the Canucks’ top line ranks as #4 overall and rising.

4th Best Line in the NHL

For pure talent and excitement, no one can match Washington’s Capital Offenders. Only Tampa Bay’s trio of Lecavalier, St-Louis and Malone contributed a greater percentage of their team’s goals and there’s every reason to believe Washington’s top line will better that performance this season with the addition of the opportunistic Knuble on right wing.

While critics maintain that Backstrom’s stats are skewed by the scoring feats of Alex Ovechkin who’s scoring at a per game rate not seen since the days of Gretzky, it’s important to remember the exact same thing was once said of the Great One’s linemate Jari Kurri (who’s now rightfully ensconsed in the Hockey Hall of Fame alongside his fabled centerman). Regardless of who leads, it takes two to tango, and Backstrom is proving an able dance partner with a solid répertoire of moves that are his alone.

Backstrom & Ovechkin’s defensive shortcomings are a fairer criticism and it’s expected that the presence of the slapdash Mike Knuble will add the necessary grit to a line that has to dominate at both ends of the ice if the Caps hope to finally topple their arch rivals from Pittsburgh.

Ranking
Whether he’s playing in Philadelphia, Boston or Linkoping, Sweden, Mike Knuble is as solid and reliable as the team Zamboni. He’ll chip in close to 30 goals, muck in the corners and be the first man back after a failed rush. In short, he’s exactly what the freewheeling Ovechkin and Backstrom need. With Alexander the Great leading the charge, the goals are a given, but can they shutdown the opposition too? Time will tell. Until then, they’re ranked 3rd overall.

3rd Best Line in the NHL

Not since the days of the fabled Production Line in Detroit has the league seen a unit comprised of three players, each of whom are capable on any given night of a ‘Gordie Howe hat-trick’ (a goal, a assist and a fight).

The Duck’s top line are proof positive that bigger is better. Young, skilled and massive, Anaheim’s titanic trio creates matchup problems for every club they face and are on the cusp on becoming the most dominant scoring line in the league.

For opposing defences, the problems start with Ryan Getzlaf, a 6’4 221 pound tank who is as adept threading seeing eye passes as he is crashing the crease. Getzy’s passes usually find their way to the 6’3 209 pound Corey Perry who led the team in scoring with 32 goals, often as the result of his uncanny ability to stickhandle in a phone booth. And now the ‘Twin Beaks’ are joined by the 6’2 218 pound Bobby Ryan, the rapidly emerging phenom who won the rookie scoring title last year with an impressive 31 goals and 26 assists while leading the team in plus/minus with a +13 ranking.

Ranking
Whether it’s cycling the puck down low, jamming the slot or tic-tac-toe passes off the rush, the Ducks’ top line can do it all. Last year’s first round upset of the San Jose Sharks proved their ability to manhandle the opposition and their pushing of the Red Wings to a seventh game serves notice that these ‘Young Ducks’ can excel in pressure packed games if their Stanley Cup pedigree hadn’t already done so. If they can eliminate the odd defensive lapse and increase their individual goal production, the top overall ranking is in sight for this towering trio. For now, they’re #2 overall.

2nd Best Line in the NHL

When we last saw them, the Blackhawks’ top line was cycling the puck faster than the fare meter in a Buffalo cab.

4th overall in league scoring in 2008/2009 with 264 goals, the Blackhawks can legitimately lay claim to an offense that boasts two top lines (1A & 1B). With 66 goals between them, the 1B line of Kris Versteeg, Dave Bolland & Patrick Kane makes it nigh impossible for opposing teams to focus all of their checking efforts on shutting down the 1A unit. Worse still for the opposition, that 1A unit has now been significantly bolstered with the arrival of perennial 40 goal man Marian Hossa. While Hossa is not the man to partner with on your playoff pool picks (let’s face it, this ex-Sen can’t pick a Stanley Cup winner to save his life), he’s undeniably shown the ability to quickly mesh with a new team, scoring 40 and 39 goals in his first full seasons with Detroit and Atlanta respectively. There is no chemistry issue here. With Hossa, the recipe for surefire goals is a simple as ‘Add one dropped puck to a sheet of ice and wait for the red light.’

The arrival of their new 40 goal man is certainly cause for celebration for linemates Jonathan Toews & Patrick Sharp as they look to build on last year’s campaign where they notched 34 and 26 goals apiece. In reference to Toews, no less a source than Detroit Head Coach Mike Babcock said, “To me, the guy you build the franchise around is the Toews kid. He’s a will machine. He just keeps coming and keeps coming.” While the 21 year old ‘Will Machine’ brings it on every shift for the Hawks, the same could be said for the relentess Sharp who’s now aiming for his 4th consecutive 20 goal season with 30 a distinct possibility.

Ranking
Young and skilled, with more upside than Joanna Krupa, the Chicago Blackhawk’s top line becomes the league’s premier scoring line with the addition of Hossa. With the perfect combination of moves, hands, grit and defensive savvy, Chi-Town’s top line can beat you 7-6 or 1-nil. Better still, they are well positioned to bat clean up thanks to the presence of an intimidating second line guaranteed to keep opposing checkers on their heels. Could this line actually boast three 40 goals scorers by season’s end? Don’t bet against it as records are certainly in reach for the ‘Best Line in the NHL.’

If not for the ever threatening injury woes of Gagne and Briere, this trio of Fleet Flyers could be ranked as one of the league’s best.

No first line in the league contributed more than Tampa’s with their 85 tallies accounting for 40.4% of the Lightning’s total goals. The downside is their collective -1 rating. Here’s a bolt out of the blue, all offense and no backchecking makes for losing hockey!

Recent games would seem to indicate that ex Shark Milan Michalek will assume the left wing spot vacated by permanent pariah, Dany Heatley. Sounds prudent to achieve that all important balance, but the Sens will need to elevate Kovalev to the first unit if they hope to contend in the Top Line sweepstakes.

The ‘Killer Dwarves’ look set to put up plenty of regular season points. It won’t be quite so pretty when the likes of Zdeno Chara, Chris Pronger and Brooks Orpik come calling at playoff time.

So where are last year’s Cup finalists in the rankings? Truth be told, while either side is capable of icing a top line worthy of the league’s elite, they opt instead for the new paradigm of balanced scoring throughout the lineup. This leaves fans eager to see a line featuring Crosby, Malkin & Kunitz or Zetterberg, Datsyuk & Franzen waiting for the inevitable powerplay when the Pens and Wings finally tip the balance in their favour.

6 thoughts on “The Best Line in Hockey is…”