When it came to choosing the best goaltender of all-time there was really only one choice— Martin Brodeur.

Brodeur is to goaltending as Gretzky is to forwards— Brodeur owns just about every goaltending record there is.

Brodeur has spent his entire career with the New Jersey Devils, spanning an incredible 21-years. The Devils were famous for using a trap-style of hockey, but this should not diminish Brodeur’s incredible record or his brilliant career statistics.

Known for his hybrid style of goaltending, Brodeur is arguably the best puck-handling goaltender of all-time. It is widely believed that Brodeur’s ability to move the puck inspired the NHL to tweak it’s rules, limiting where a goalie could play the puck.

Brodeur may have lost his fair share of games, but despite a few poor showings, there is little doubt that he is the best “money” goaltender of all-time and the greatest goalie in NHL history.

Ask yourself this, if you had to win one game, which goaltender would you choose? If you didn’t answer Martin Brodeur, you haven’t been paying attention!

When it came down to picking the second best goaltender of all-time two names stuck out— Patrick Roy and Terry Sawchuk.

While Sawchuk is widely considered one of the best goalies ever, Roy was far superior technically. When you consider the two goaltenders’ careers, they actually mirror each other quite 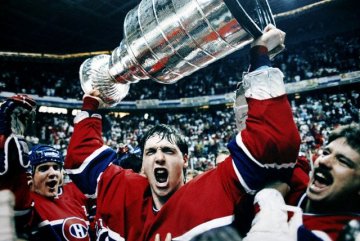 well, and in many instances the statistics and awards were essentially the same. In the end it came down to a number of factors, but there were a few statistics that stood out that gave Roy the nod.

Sawchuk could easily be in Roy’s place, but when you consider Roy’s body of work and the fact that he played at such a dominant level for so many years, I just had to give Roy the nod, which will make Detroit Red Wing fans angry, but bring a smile to the face of every fan of the Montreal Canadiens.

Here is a quick look at the final roster:

Honorable Mentions go out to:

Dislike the team? Make your best argument for the player or players you feel we missed in the comment section…

9 thoughts on “The Best NHL Lineup Ever: The Goalies”