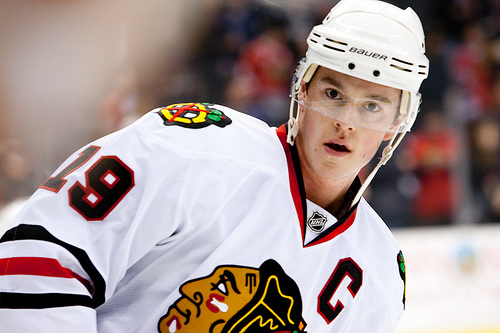 The Chicago Blackhawks have been fantastic this season. Looking at their 16-0-3 record, that’s an incredibly obvious statement. Even more obvious is the fact that they’re getting contributions from all over in this record-setting run, including from a few players who are starting to garner some attention as Hart Trophy candidates.

Though you could make an argument for the likes of Duncan Keith, or potentially even Corey Crawford, the Hart buzz for the Hawks has come from up front. All three of Jonathan Toews, Marian Hossa, and Patrick Kane have been mentioned at one point or another as a potential MVP candidate.

But which one would deserve the hardware the most? Of the three, Hossa is probably already out of the running. He’s been fantastic this season, playing his typical two-way game that is as good as ever. He has 15 points in 19 games, falling a bit short of a point-per-game. And he’s been rather quiet lately. He’s obviously crucial to the success of the Blackhawks, but as an MVP candidate, he’s probably going to take the bronze here.

If a Hawk is going to take home the Hart this year, it could come down to one of Jonathan Toews or Patrick Kane. Either one is deserving of the honor, but one of them fits the very definition of “most valuable”.

Kane has been brilliant this year. There’s no doubt about it. That time in Switzerland has done him well, in terms of both his maturity and his conditioning. He’s reached a superstar level of play this season, with 24 points in 19 games. He’s making it look easy out there, plain and simple. But Kane’s game is relatively limited to the offensive end. Which is fine. No one is expecting him to go out and be the two-way player that the likes of Toews or Hossa are. He’s an offensive talent, and a fine one at that. He’s doing exactly what the Blackhawks want him to: putting points on the stat sheet.

Having been forced to criticize two outstanding Blackhawks in order to dismiss them as Hart Trophy candidates can only mean that there is a clear cut favorite for the award: Jonathan Toews. He’s not just the MVP of the Hawks, you could make an argument that there is no single player in the National Hockey League that is more important than Toews is to his team.

He’s as good a two-way forward as there is. Almost no one performs better in the faceoff circle. His backchecking is fantastic. His offensive game is just as good as his defensive game, with 15 points in 19 games this season, same as Hossa. What makes Toews different from Hossa, in terms of award consideration, is that all-around game. Toews contributes in every aspect of the game for the Blackhawks. He’s leading the forwards on full strength, on the penalty kill, and on the power play. And he performs well in each aspect. Not to be overlooked are the intangibles that Toews brings to the equation. He’s an outstanding leader and often regarded as the best captain in the league.

Based off of everything he brings to the table, it has to be Jonathan Toews as a Hart Trophy favorite from the Blackhawks. It’s almost impossible to overstate how important he is to the success of the Blackhawks. If you can only pick one to consider, make it Toews.