The Tampa Bay Lightning fell to the San Jose Sharks 3-1 on Saturday, but more importantly, however, it marked the team’s sixth loss in the last nine games played. This, after winning five of their first six games to start 2016-17.

The team has gotten off to slow starts in many games this season, forcing them to play from behind and the results in some of those contests reflect it.

The Lightning are 8-6-1 through the first 15 games of the season and are in fourth place in the Atlantic Division. It’s a far cry from the start expected for a team made up of virtually the same players who took the Pittsburgh Penguins to seven games in the 2016 Eastern Conference Final.

Their success revolves around playing a fast-paced style to dictate the play by controlling the puck and using their speed. There have been glimpses of that this season and the team’s power play has improved, but slow starts out of the gate have been an Achilles’ heel to start the season.

The Lightning begin a five-game road trip when they face-off against the New York Islanders on Monday — a stretch of games that will take them almost to Thanksgiving.

What will it take for the Lightning to get back on track at this point in 2016-17?

The Lightning have scored first in just five games this season and are 4-1 in those contests. While the team has shown the ability to come from behind to win games and did it to rattle off three wins to open 2016-17, it makes for an uphill battle. The team’s only loss when scoring first came against the Montreal Canadiens, when the Lightning lost a hard fought battle 3-1 on Oct. 27.

During the Lightning’s past six games, they have posted a 3-2-1 record and scored first in two of those wins.

“If you get the lead, your chances of winning are better. It doesn’t guarantee you are going to win, but it’s much easier to play with the lead than not … and there is a little bit of a margin for error,” head coach Jon Cooper said after Thursday’s game against the Islanders.

The team has scored in the first period four times this season and boasts a 3-0-1 record when it happens. The Lightning’s only loss came against the Boston Bruins on Nov. 3 when they fell behind 2-0 by the midway point of the first period and battled back to tie the game 3-3 before losing in a shootout, 4-3.

When playing from behind in a game, it can cause a team to change their style and almost as important, becomes physically exhausting. It’s something they cannot afford to continue doing, given the demands of their recent schedule and current road trip. The team played six games from Nov. 1 to Nov. 12 and their current five-game road trip will be completed in just eight days.

When the Lightning score first in a game, it helps position them to play their sort of style and dictate the play, as opposed to fighting their way back to earn important points.

The Lightning have been able to overcome some slow starts to some games by feeding off of the success of their special teams units — particularly with their power play. If the team can get out of the gate quicker to start, while continuing to convert on the power play like they have been, it will translate into earning points in games where the Lightning haven’t come away with any so far. 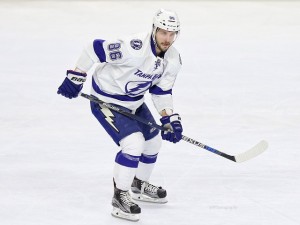 Entering Monday’s contest against the Islanders, the Lightning have the fourth best power play in the league — operating at a 25.4% success rate and with goals scored by eight different players. The power play unit has been consistently good this season, despite the absence of Jonathan Drouin since Nov. 1, after he emerged an important quarterback on the unit.

The importance of their power play was on display on Thursday against the Islanders. The Lightning’s first shot on goal did not come until after John Tavares took a penalty at 6:38 of the first period, and Steven Stamkos scored on the ensuing power play to help kick start the offense. Tyler Johnson also added a power-play tally during the second period in the 4-1 Lightning win.

“I really liked our power play and I thought we really fed off that,” Cooper said during his postgame press conference.

The Lightning’s eighth ranked penalty killing unit has also been asset for the team early on, as it has benefited from the return of Ryan Callahan and operated at an 86% success rate. The unit killed off an important penalty during overtime against the Bruins on Thursday, despite the eventual result in the shootout.

The Lightning must take advantage of starting games strong and playing their style, while also continuing to perform well on the power play in order to be successful during this five-game road trip. They play back-to-back games against the Islanders and Detroit Red Wings before matches with the Buffalo Sabres, Philadelphia Flyers and Nashville Predators.

The Lightning would benefit from Tyler Johnson and Ondrej Palat finding their scoring touch, after slow starts statistically for both players despite the work ethics that have defined their careers. They will be without Anton Stralman for at least the first three games of the road trip after he suffered an upper-body injury against the Sharks on Saturday. Drouin is still out with an undisclosed injury, but may return to the lineup during this road trip. Expect players like Brayden Point to continue to take on a bigger role with the team in place of Drouin and Slater Koekkoek to be looked upon in much the same way he was when Stralman was injured last postseason.

The team’s goaltending tandem has been a strong unit, as Ben Bishop and Andrei Vasilevskiy have combined for a 2.47 goals against average and a .918 save percentage, despite the team’s 8-6-1 record. Each goaltender has made strong saves to keep the Lightning in games, whether playing from ahead or behind at the time.  Vasilevskiy has gone 3-1-1 with a 2.00 goals against average (fifth in the league) and .932 save percentage (eighth) in five starts. He is expected to make his sixth start of the season on Monday.

When compared to last year’s version of the Lightning, this year’s team has a nearly identical record. They were 7-6-2 after 15 games in 2015-16 and hovered at or below .500 through the end of November. Recovering with a stronger second half, they came within one win of returning to the Stanley Cup Final, but the slow start forced them to earn important points late in the season.

With essentially the same team as last year, the Lightning certainly remember it and want to avoid repeating that start this time around. As they start this five-game road trip, however, the time is now to put that plan into action.