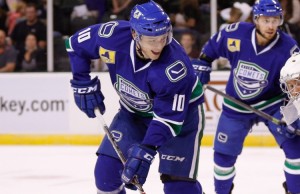 Gaunce, 21, has appeared in 43 games for Utica this season, where he currently leads Comets skaters in points (33) and goals (15) and ranks tied for third in assists (18). He made his NHL debut earlier this season on October 29th at Dallas and notched his first career goal the following night at Arizona. In 2014.15, Gaunce played in 74 games for the Comets, where he notched 29 points (11-18-29) and 31 penalty minutes in his first professional season.

A native of Sudbury, Ontario, Gaunce was originally selected by Vancouver in the first round, 26th overall, at the 2012 NHL Entry Draft.

Eight teams – Team Canada, Team Czech Republic, Team Finland, Team Russia, Team Sweden, Team USA, Team Europe and Team North America – will compete in the two-week tournament, featuring more than 150 of the best players in the NHL. All tournament games will be played at the Air Canada Centre in Toronto.

All eight teams competing in the World Cup of Hockey 2016 announced their rosters of at least 16 players today. Each of the teams will have a tournament roster of 23 players: 20 skaters and three goaltenders. The balance of each team’s roster will be announced no later than June 1, 2016.

Nikita Tryamkin, selected in the 3rd round of the 2014 entry draft (66th overall), is a hulking blue liner, clocking in at 6’7″ and 220 pounds. Over the past few seasons, Tryamkin has been developing in the KHL, but now looks set to be signed by the Canucks. He looks to get a chance on the Canucks blue line for the remainder of the season, and should he impress, snag a spot heading into 2016-17.

"There's a player we drafted, Nikita Tryamkin, that we're in negotiation with his team to bring him over as soon as we can" – Benning

The importance of Ben Hutton for the Canucks

With the injury to Alex Edler, someone on the Canucks blue line needed to step up, and that player has been rookie defenceman Ben Hutton. Hutton, who most didn’t even have on their radar to start the year, has excelled all season long, but has taken his game to a whole new level of late. Since Alex Edler’s injury on February 9th against the Colorado Avalanche, Hutton has bested 20 minutes of ice-time each and every game, and has fallen below 23 minutes just three times in that stretch (11 games). Hutton is also producing at a better than 0.5 points per game pace over that period of time, with six points (all assists) in the 11 games, helped by the fact that he’s being relied on to quarterback the top power play unit. One of the biggest criticisms of the Canucks organization has been their lack of blue chip young defensemen, but should Hutton continue to perform as well as he has, they may just have one on their hands.

Jacob Markstrom should be given more opportunity in stretch run

With the playoffs solidly in the rearview mirror, one guy that should be given a chance to shine is backup goaltender Jacob Markstrom. Recently named to Team Sweden at the World Cup of Hockey, Markstrom has done extremely well in a #2 capacity this year, with a .917 SV% in 23 games played. With just one year left on Ryan Miller’s contract, it appears as if Markstrom will have to take over the Vancouver net in 2017-18, but the Canucks need to make sure he’s ready. To do that, they’ll have to give Markstrom more starts over the remaining 20 games. They need to give him a chance to play multiple games consecutively. The Miller-Markstrom tandem looks poised for at leats a 60-40 split next year, and the organization will need to do everything to make sure the 26-year-old is ready for that kind of workload in the coming season.

Is this the end of the line for Alex Burrows? [Vancouver Sun]

Canucks prospect report for the month of February [Sportsnet]

How Derek Dorsett can affect the Canucks’ youngsters [The Province]