The Thrashers have the worst fans in the league. At least this is according to Derek Felska, a blogger for The State of Hockey News, a Minnesota Wild blog. In a blog entry, he ranked the fan bases of all 30 teams, and at the bottom of the barrel are mostly teams that finished low in the standings. Three teams managed to finish worse than the Thrashers in 2008-2009, yet somehow, the city of Atlanta has the worst hockey fans.

Let’s pick apart what he wrote:

I am going to share a little story with you which will might explain why the Atlanta Thrashers are deserving of being called the league’s worst fans.  Just this spring, I went down Georgia as part of an Educators Tour to Ft. Benning.  On our way back, we were given the day to enjoy downtown Atlanta.  While there I went into a sports apparel shop, which was filled with all sorts of Atlanta sports team clothing; Braves jerseys, Falcons jerseys, and some college football jerseys yet nowhere to be found was anything pertaining to the Thrashers.  I asked the attendant, “Do you have any Atlanta Thrashers stuff” and I was met with a confused look and then a quick question to her co-worker, “Do we have any Thrashers stuff?”  A few seconds later they pointed me to the only two items they had pertaining to the Thrashers along with an explanation of how extremely rare it is anyone is looking for their merchandise.  Now does that mean that there are almost no Thrashers fans out there?  No, but in the larger scheme of things there does not appear to be too many.  In a Southern city where its almost a challenge to find someone with a southern drawl, it might surprise people just how many Atlanta residents are people who used to live in areas which are quite familiar with snow and ice.  The Thrashers online presence is very small and that does little to help a team that many in Atlanta seem to struggle to remember they are even there.  That sound you just heard was Ilya Kovalchuk screaming over the fact he has at least one more season with the team. 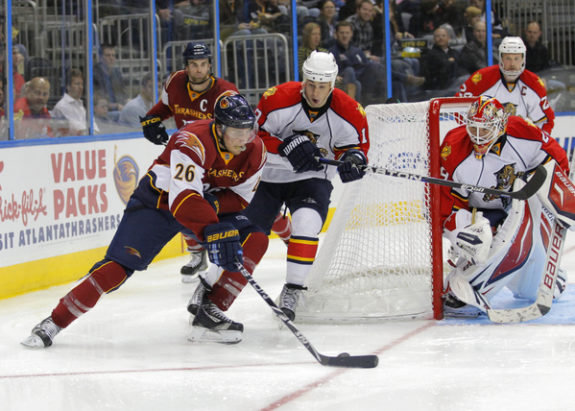 Beside the fact that Ilya Kovalchuk has stated in multiple interviews that he wants to see the Thrashers succeed and help the team that drafted him succeed, the fact that he based his opinion off of one mom & pop sports shop not selling Thrashers apparel, and that he gave the Thrashers online presence the lowest rating despite …well, I’m rambling.

Point is, immeasurable factors like fan passion didn’t affect any teams rating, and the Thrashers became last out of bias of team performance, game attendance, and one cute little anecdote which does generalize about the whole Atlanta Thrashers fanbase. The more I look at it, the more I see that every team has a little bit of made-up mumbo jumbo. I’m sorry, but it seems the list was supposed to rank the quality of the fans, not the quantity. What is, exactly, this list based off then? You got me hanging. The whole ranking, from top to bottom, is confused.

Derek, if you would like to play the game of anecdotes, two can play. Did you see Philips Arena packed stupid with screaming Thrashers fans when they played their first playoffs games? How about the “web guy” for atlantathrashers.com telling those pathetic fans that they’re the most active on their team’s message boards? Well, since the online presence is bone dry, I’ll direct you to Thrashers Times which is a collection of just a portion of the Thrashers blogosphere. Some fans of other teams are wondering where the heck we came from, and why we’re so active. Did you happen to catch a collection of Thrashers fan photos from around the world? Sure, the fans may not live in those exotic places, but it’s not like these fans have any passion to wear their Thrashers gear in the middle of summer vacations.

Worst online presence? Made up. I found it to be quite the opposite.

Ilya Kovalchuk screaming the last year of his contract? Made up. He can’t wait for the season to start (ignoring how irrelevant this issue is).

Some Atlanta store not selling Thrashers stuff? A generalization.

Here’s another round of anecdote, but I’m sure if it pertains to a traditional market, you’ll just overlook it. I went to a local Wal-Mart outside of Chicago. This particular Wal-Mart sold a myriad of Cubs, Sox, Bears, Fire, NCAA, Packers, and Cardinals merchandise, but not one  Blackhawks piece. Upon asking an employee about it, I quote the employee: “I didn’t think anyone cared about the Blackhawks around here.” On the other hand, I have seen Thrashers merchandise in an Atlanta-area Wal-Mart. Can this now mean, besides a vast, ignorant bandwagon that rolled through Chicago, that the Blackhawks should be ranked lower? Probably not. After all, they’re in a traditional market, and Atlanta is not. The criteria for “best and worst fans” blurs more out of focus.

(Disclaimer: I have all the respect in the world for the old-time Blackhawks fans, but you can’t deny that the bandwagon gets really annoying really quick.)

I have all the respect for fans all over the continent and across continents, until the Northern elitist bologna slips in this kind of “journalism.” Case in point, do not bring Ilya Kovalchuk into it. You are talking about the fans, not taking a stab on the team. Derek, my suggestion is to take a look at the facts before you speak of your pipe dreams of Kovalchuk dying to escape to a traditional market.

And NHL fans, unless you take on the same blind, closed-minded elitist attitude that refuses to look at facts, I would urge you to throw Derek’s list out the window no matter where your team is ranked. Every team has passionate fans, and fans to be proud of. If you want a real and much better ranking of the best and worst fans (that’s still very loose in logic), just find an average attendance listing and call it a night.

3 thoughts on “Thrashers Fans are the Worst”