The New York Islanders royalty is synonymous with the Stanley Cup winning teams. From Denis Potvin to Mike Bossy, their retired numbers hang in the rafters of first the Nassau Coliseum and now the Barclays Center. While the years following the Cup wins have been mostly lean, the list of memorable players is quite long. Here are the ten best. 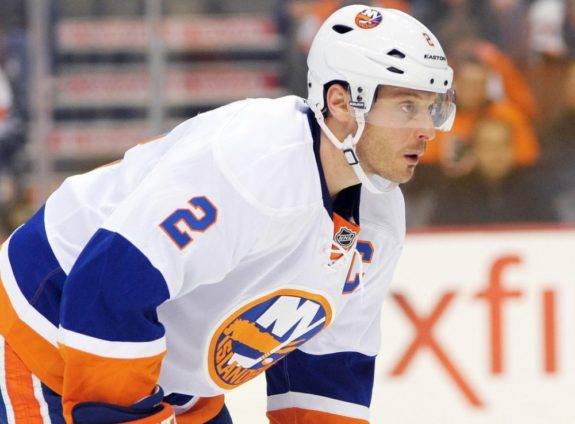 General Manager Garth Snow’s first big free agent signing. He added a boost to the blue line when he signed the Swiss defenseman to a 5-year, $20.5 million dollar contract in the summer of 2008. The signing immediately paid dividends as he led the team in scoring with 56 points and was named to the 2009 All-Star Game. He provided a spark to the power play as 10 of his 16 goals came on the man advantage. Streit missed the entire 2010-11 season after tearing his rotator cuff on a hit by teammate Matt Moulson in a preseason scrimmage. He bounced back with a 47-point season in 2011-12, the same season he was named team captain.

Streit closed out his Islander career playing strong in the 2013 postseason registering 2 goals and 5 points in the 6-game series loss to the Pittsburgh Penguins. Streit’s contract was about to expire at the end of June. Snow was not going to re-sign the Swiss. Rather than let him walk, Snow traded him to the Philadelphia Flyers for a 4th round pick.

The 13th overall selection in the 1985 draft, the left winger netted two 30-goal seasons and set a career high with 40 goals in the 1991-92 season. A fixture on the power play, King scored 52 goals in a 3-year span (1991-94) with the man advantage. The speedster scored 38 goals in the 1992-93 season and carried that scoring touch into the 1993 playoffs. King had 14 points in 18 games in the Isles improbable run to the Wales Conference Finals. King scored 2 goals, including the game-winning goal in a wild Game 4 of the Patrick Division Finals vs the Pittsburgh Penguins. King scored 23 goals in 71 games in his last season on the Island (1996-97). He was traded to the Hartford Whalers at the trade deadline. In his 11 years with the Islanders, King scored 211 goals and 499 points.

June 24, 2000 will go down as one of the most memorable days during Mike Milbury’s reign with the Islanders. The team had the first overall pick in the draft and selected goaltender Rick DiPietro. To make room for DP, “Mad Mike” traded Roberto Luongo, the 4th overall pick three years earlier and Olli Jokinen to the Florida Panthers for Mark Parrish and Oleg Kvasha. The move that flew under the radar that day was the acquisition of defenseman Roman Hamrlik from the Edmonton Oilers for Eric Brewer and Josh Green. The 1992 top overall pick by the Tampa Bay Lightning immediately improve the Isles power play and was the anchor for his four years on the Island. “Hammer” finished second on the team with 46 points and tied his career high with 16 goals in 2000-01. He registered two 40-point seasons with the team. Hamrlik played in the Czech Republic during the 2004-05 lockout and signed with the Calgary Flames the following season.

One of Milbury’s better trades (Wendel Clark and Mathieu Schneider to Toronto for Jonsson, a number one pick and two other players). He was one of the most underrated defensemen during his career. Never flashy, Jonsson just played a solid defensive game. His best year statistically came in 1997-98. Jonsson set career highs with 14 goals, 26 assists and 40 points. He became the 8th captain in team history during the 1999-00 season. Perhaps Jonsson’s biggest moment in his career came in Game 5 of the 2002 playoffs vs the Toronto Maple Leafs. Jonsson was playing the puck in the corner and took a vicious hit by Gary Roberts. The hit left the defenseman concussed and missed the rest of the postseason. Roberts received a major penalty on the hit but was not suspended.

The Isles lost in 7 games to the Leafs. During the 2004-05 lockout Jonsson played in his native Sweden. He elected to stay in Sweden once the lockout was lifted. The former captain became the third defensemen (Denis Potvin, Ken Morrow) to be inducted in the Islanders Hall of Fame in 2012.

“Chicken Parm” was acquired from the Hartford Whalers for defenseman Doug Crossman a month into the 1990-91 season. Ferraro really hit his stride the following season. He netted his second career 40-goal season and set a career high with 80 points. He was poised to build on that career season but injuries forced him to miss 36 games in the 1992-93 season. A healthy Ferraro was ready for the 1993 playoffs. He opened up the Patrick Division Quarterfinals vs the Washington Capitals with a 5-game goal streak. During that streak, Ferraro scored the game-winning overtime goal in Games 3 and 4 and followed that up with a 4-goal game in Game 5. He finished the 6-game series with 8 goals and 10 points.

Ferraro’s biggest moment of his career came in Game 7 of the Patrick Division Finals vs the two-time defending Stanley Cup Champions Pittsburgh Penguins. Forward David Volek one-timed Ferraro’s pass in overtime to give the Isles the series win and berth in the Wales Conference Finals against the Montreal Canadiens. Ferraro finished the postseason with 13 goals and 20 points. Ray had back-to-back 20 goal seasons the next two years before leaving in free agency to sign with the New York Rangers.

October 25, 1991 was the end of an era for the Islanders,  New York, in separate moves, traded captain Brent Sutter and top scorer Pat LaFontaine. Thomas was acquired from the Chicago Blackhawks in the Sutter trade. “Stumpy”, already a two-time 40-goal scorer would have his best years with the Islanders. During his 4-year stint on the Island, he would record 118 goals and 258 points.

Thomas was a big contributor to the 1993 playoff run with 9 goals and 8 assists. The nightmare that was 1995 saw Thomas moved to Colorado in a three-way deal. The Islanders got Wendal Clark in return. Thomas recorded three more 20-goal seasons and played until the age of 40.

The face of the “Fisherman Era”, Palffy was the lone star, the only reason to go out to the Nassau Coliseum. From 1995-98, Ziggy had three straight 40-goal seasons. He led the league with 17 power play goals in 1997-98. He improved his plus/minus rating by 38 (from -17 in 1995-96 to plus 21 in 1996-97). No one was close to Palffy on the Isles scoring list during those seasons. Palffy held out prior to the 1998-99 season and missed the first 32 games. The Isles signed him to a 5-year contract worth $26 million. Ziggy scored 50 points in 50 games that season. Palffy would only play the first year of that contract as he was traded to the Los Angeles Kings in what was basically a salary dump. Palffy was sent with Bryan Smolinski for Ollie Jokinen, Josh Green, Mathieu Biron and the Kings number one pick. Palffy was exactly a point per game player for the Islanders (331 points in 331 games).

It is rare when a team involved in a contract dispute with a player gets equal value for that player but that’s the case when the Islanders acquired Pierre Turgeon from the Buffalo Sabres for Pat LaFontaine on October 25, 1991. The 1987 first overall pick made an immediate impact in his first year with the Islanders. Number 77 scored 38 goals in 69 games. The following season would be Pierre’s best as the French Canadian scored 58 goals and 132 points and helped the team reach the playoffs for the first time since 1990. Turgeon scored what would be the series-clinching goal vs the Washington Capitals in Game 6 of the Patrick Division Semifinals. As he celebrated the goal, Turgeon was blindsided by Capitals forward Dale Hunter. Pierre separated his shoulder and missed six of the seven games vs the Pittsburgh Penguins in the Patrick Division Finals.

The Islanders defeated the Penguins in 7 games and advanced to the Wales Conference Finals against the Montreal Canadiens. Turgeon would score 2 goals and 5 points but was not completely healthy as the team fell to the Habs in 5 games. He was awarded the Lady Byng Memorial Trophy for the 1992-93 season. Turgeon scored 147 goals and 340 points in 255 games on the Island. He was traded to the Montreal Canadiens as part of the Kirk Muller deal. That trade is considered the start of the Islanders downfall. Turgeon would go on to score 246 goals following the trade.

It is hard to believe that the Garth Snow’s rebuild centerpiece is in his 7th season in the NHL. Tavares rebounded nicely from the MCL injury he suffered at the 2014 Winter Olympics. He set career highs with 38 goals and 86 points last season. JT finished one point behind the Dallas Stars’ Jamie Benn for the Art Ross Trophy. The top pick in the 2009 draft has been a Hart Trophy candidate two of the past three seasons.

Tavares has the flair for the dramatic as he broke the Islanders record for career overtime goals with 5 and scored just 15 seconds into overtime of Game 3 of the Eastern Conference Quarterfinals vs the Washington Capitals a season ago. Snow wisely locked up JT to a 6-year contract worth $33 million dollars and probably is one of the biggest bargains in sports. When all is said and done, John Tavares’ number will be hanging among the Islander greats.

The Islanders traded Bob Lorimer and Dave Cameron to the Colorado Rockies (now the New Jersey Devils) in 1981 for their first round pick in 1983. It became one of the greatest trades in team history as the 3-time defending Stanley Cup Champions selected Pat LaFontaine with the third overall pick. After competing in the 1984 Winter Olympics, Pat joined the team in time for the “Drive For Five”. LaFontaine recorded 9 points in 16 playoff games as their bid for a fifth cup ended in five games to the Edmonton Oilers. As the Cup winning players began to age, LaFontaine made the team his. 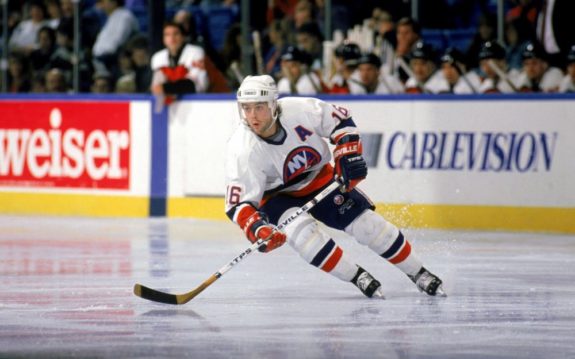 The 20-year-old registered his first 30-goal season in the 1985-86 season. The following season, his game-winning goal in the 4th overtime of Game 7 defeated the Washington Capitals in the Patrick Division Quarterfinals. The game has been become known as the “Easter Epic”. Pat spent 8 seasons on the Island netting 287 goals and 566 points in 530 games.  His 287 goals are tied for fifth in franchise history. A contract dispute led to his trade to Buffalo. LaFontaine was inducted into the Hockey Hall of Fame in 2003. Islanders owner Charles Wang brought him on as an adviser in 2006. He abruptly quit following the dismissal of newly hired General Manager Neil Smith. The team and Pat finally buried the hatchet and honored him last season. The team failed to induct him into the Islanders Hall of Fame. Something that I hope will be rectified soon.