With the close of the 2017-18 regular season marking the end of the Tampa Bay Lightning’s 25th regular campaign, this makes for a perfect time to look back at the best goaltenders for the franchise over the last quarter-century. Throughout their history, the Lightning have been a proverbial revolving door for goaltenders, with only two playing more than 200 games in 25 years. However, even if the list of truly great goaltenders is short for the Lightning, there still are some important faces who have played in the crease for the Bolts.

The elder statesman of Lightning goaltending, Darren Puppa played with the franchise for seven seasons from 1994 through 2000, the longest tenure of any goaltender in the team’s history. In his first three years, Puppa started close to 160 games, putting up consistently great numbers with a bad expansion team. It was his play that largely carried the fledgling franchise to its first playoffs in the 1995-96 season.

As said by Lonnie Herman in a 2010 article about Puppa for NHL.com:

Puppa rarely found the bench, much less sat on it, as he appeared in 63 games for Tampa Bay in his first season while compiling a 2.71 goals against average, an achievement made all the more remarkable because the Lightning, not known for their defense, finished with a 30-43-11 season record.

If not for his struggles with injuries during and after the 1996 playoffs, Puppa could have become one of the faces of the Lightning franchise. Even with his career being cut short, what he did in his three full seasons with the Lightning still is remarkable. His numbers may not jump off the paper, but Puppa will forever have a spot in the Lightning’s lore.

It may seem a bit preemptive to consider Andrei Vasilevcksiy the third best goaltender in the Lightning’s history after only one full season as a starter, but what the young Russian goalie has done is truly remarkable. Not only did he finish tied at the top of the NHL with 44 wins, he was a dominant presence in net for the majority of the season, leading to his first All-Star game nod. His 44 wins, eight shutouts, and six road shutouts also all set Lightning single-season records. 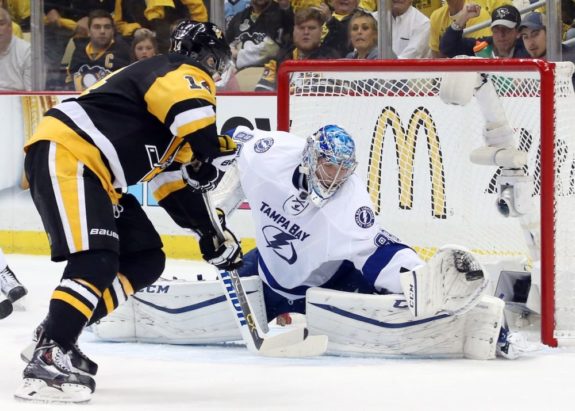 In his first full season as an NHL goaltender, Andrei Vasilevskiy put together one of the best single seasons in Tampa Bay Lightning history. (Charles LeClaire-USA TODAY Sports)

When Lightning general manager Steve Yzerman drafted Vasilevksiy in the first round of the 2012 draft, he did so to hopefully fix the team’s goaltending struggles throughout their first 20 years. While it is too early in his career to say whether he is the answer, Vasilevskiy made a great case for himself in year one. Should his play continue, he very well could be the Lightning’s top goaltender by their 30th anniversary.

Statistically, Ben Bishop is the top goaltender in the Lightning’s history. Not only was he the first goalie to break 100 wins with the franchise, his .921 save percentage (SA%) and 2.28 goals against average (GAA) are at the top for any player with more than five starts in net for the Bolts. He also received multiple Vezina nominations in his short tenure with the Lightning, finishing as high as second after the 2015-16 season. 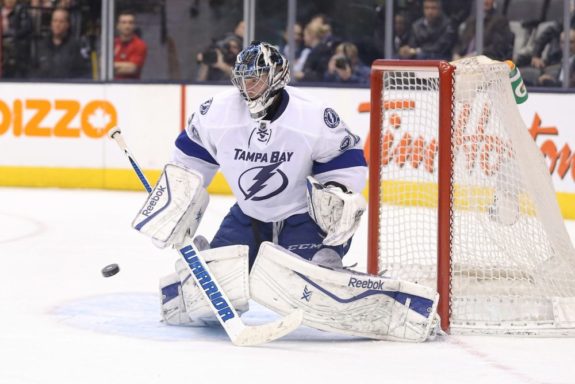 In a few short years with the Lightning, Ben Bishop became one of the best goaltenders in the history of the franchise. His play helped to establish a new era of success for the team after close to a decade of goaltender struggles.  (Tom Szczerbowski-USA TODAY Sports)

When Yzerman traded for Bishop at the 2013 deadline, no one expected him to go on and become one of the top goaltenders in the team’s history. Bishop was more than a goalie for the Bolts: he was the stability in net that a young team needed to make the next step to greatness. As rookies and veterans found their game around him, he carried the team, leading them to three straight playoff appearances and a Stanley Cup Final.

Had he not struggled with ill-timed injuries, Bishop very well could have pushed the Lightning to win a Stanley Cup. However, he will always have a place in the history books as the backstop for the Yzerman-era rebuild of the Lightning.

There’s no goaltender more important to the history of the Lightning than Nikolai Khabibulin. While his .914 SV% and 2.39 GAA are both well below Bishop’s, these statistics are relatively unimportant when you have the one thing every player covets: a Stanley Cup. Khabibulin’s career with the franchise was not always picture-perfect, but when the Lightning needed him most, he found a way to win it all.

After winning the Stanley Cup with Tampa Bay, Nikolai Khabibulin played for the Chicago Blackhawks and Edmonton Oilers but failed to recapture the level of play that led him to win it all with the Lightning. (Icon SMI)

There’s no telling what Khabibulin and the Lightning could have done together had they not lost the 2004-05 season to the lockout. After the lost season, there was simply no way for the Bolts to match the offer made by the Chicago Blackhawks during free agency, who made him the highest-paid goaltender in the NHL at the time. After he left, the team went through a goaltending spiral that didn’t end until the trade for Bishop eight years later.

Even though his legacy with the franchise was cut short due to the lockout, he will forever be at the top of the discussions for best Lightning goaltenders. He brought the team their first Stanley Cup, and in many ways, this legacy is one of the reasons why the franchise was able to survive 25 years. Without Khabibulin and the Cup, there’s no telling where the Lightning would be right now.