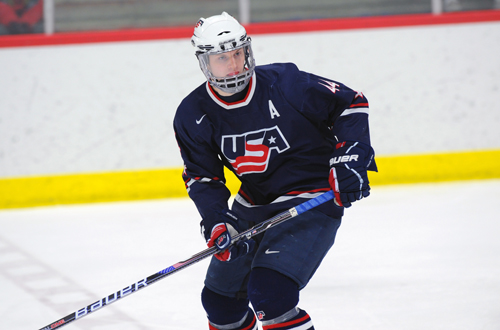 Jacob Trouba is one of four Winnipeg Jets players playing in the 2013 IIHF World Championships. (Ikon)

In the three weeks since the Winnipeg Jets final game of the 2013 season, four Jets began their offseason conditioning by joining their respective countries for the 2013 International Ice Hockey Federation World Championships in Stockholm and Helsinki.

For Ladd, Pavelec, and Kulda the World Championships have been their late April and early May hockey destination each of the last three summers as the Thrashers now Jets haven’t made the postseason dating back to 2007, the franchise’s only playoff appearance.

It is the young Trouba’s first trip with the top-level of Team USA, but it is not the Michigan native’s first international hockey experience. Last December Trouba was a key part of Team USA’s World Junior Championship Gold-Medal winning team, earning  a team-best nine points (4 goals, 5 assists) through the USA’s championship run.

With Team Canada, Ladd has played in all seven preliminary round games, earning four total points (3 goals, 1 assist) and a +2 plus/minus rating. He scored his first goal of the tournament in Canada’s second contest, a 3-2 shootout loss to Switzerland. His next two tallies came in Canada’s 7-1 route of Norway and 4-1 defeat of Belarus. Ladd opened the scoring against Norway to give the Canadians a 1-0 lead just under five minutes into the game. Against Belarus, the Jets captain gave his squad a 2-0 lead late in the first period. In his previous World Cup competition, Ladd earned a goal and four assists, all coming in the 2012 rendition of the tournament.

Pavelec appeared in four of the Czech’s seven opening round games, backstopping them to all of their wins against Denmark, Slovenia, and Norway. Pavelec compiled a tournament best 1.26 goals against average and sixth-best save percentage of 93.75 percent. In his most recent against Norway, Pavelec stopped all 11 shots he faced through the first 53:32 of play. His backup, Pavel Francouz completed the dual shutout stopping six shots.

Trouba appeared in the first four games of the USA’s seven preliminary round games in the Helsinki pool. His lone point came on the power play in the US’s second game of the tournament against Latvia. He got the second assist on David Moss’ extra-man tally, which turned out to be the game winner in a 4-1 American victory. Trouba hasn’t appeared since Team USA’s 4-1 victory over Finland.

Kulda is the only Jet participating, who won’t be moving into the quarterfinal stage as Team Latvia finished with a 2-0-1-4 record tied for sixth with France in the Helsinki group. Kulda had a goal and an assist as he appeared in all of Latvia’s contests. The lone goal came against Trouba and the USA as he put the Latvians ahead 1-0 early in the second period of that contest and the assist came two games later as he set up Zemgus Girgensons to give Latvia a 3-1 lead late in the first period over Slovakia.

After finishing second in the Stockholm group, Ladd and Team Canada will take on Team Sweden at 1:15 pm CDT on Thursday in Stockholm. Pavelec and the Czech Republic, who earned the last quarterfinal birth from the Stockholm teams, face Switzerland at 7:45 am CDT on Thursday, also in Stockholm’s Globe Arena. Trouba and team USA finished tied for second in the Finland-based group with a 5-0-0-2 record are slated for a 5:00am CDT puck drop in Helsinki on Thursday.