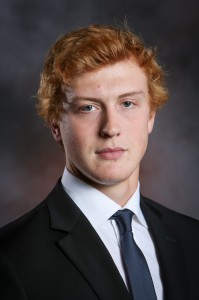 Two local players from Grand Forks, North Dakota are set to make their UND debut on October 6, 2013, when UND takes on the University of Manitoba Bison in an exhibition game at the Ralph Engelstad Arena. Two players of interest are first cousins Paul Ladue and Luke Johnson.

Taking a look at their Numbers

Looking at Luke Johnson’s statistics, he scored (39g-62a—101pts) in 112 USHL games with the Lincoln Stars. Johnson was drafted in the fifth round (134th overall) by the Chicago Blackhawks in the 2013 NHL entry draft.

Looking Paul LaDue’s statistics, he scored (21-g-62a—83pts) in 118 USHL games.  Ladue was named the 2012-13 USHL defenseman of the year and he also led the USHL in points by a defenseman for the 2012-13 season. Ladue ended his career with the Lincoln Stars as the highest scoring defenseman in Lincoln Stars history. LaDue was drafted in the 6th round (181st overall) by the Los Angeles Kings in the 2012 NHL entry draft.

During their formative hockey years, Paul and Luke played on the same teams starting with their days with Central High School in Grand Forks, ND. From there they played together with the Lincoln Stars of the USHL and now they’re set to take the ice for the UND hockey team this fall.

Eric Burton: You’ve played together in high school, juniors and now you’re set to play together in college. What are your thoughts on playing with your cousin Paul LaDue?

Luke Johnson: We’ve been together for a long time. I like it. We’ve grown up together. Battled against each other and helped each other out along the way. I am fortunate enough to spend half of my hockey career with him. I am very excited about it.

EB: What are your expectations coming into this season with UND?

LJ: Just to play a big role on the team. I am not going to set any stats or anything like that. I am just going to try and work hard. Hopefully play a lot of minutes.

EB: Can you touch on your experience playing with the Lincoln Stars?

LJ: It was a great experience; they have a great coaching staff there with Jimmy McGroarty and Chad Johnson. It was a great experience. It’s a good program. They really helped me develop as far as the hockey side, and I guess the off the ice part too. Just playing against better competition and all of that stuff, rather than in high school, it  really helped me develop.

EB Do you feel any pressure being from Grand Forks and playing for UND?

LJ: Not really. I am just here to play hockey, so no. I am just going to try to play a lot of minutes. 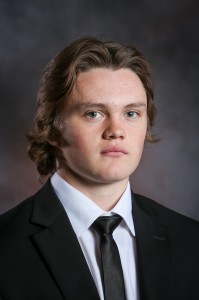 EB: What are your thoughts on playing in the new NCHC?

LJ: It’s honestly going to be very tough. Any way you look at it, the schools like Miami, and Saint Cloud. All those school there, it’s going to be a tough schedule for sure. You’re going battle every night and have to work for every single point. It going to be good, it’s going to be really fun to see how we compare to those other schools for sure.

EB: What kind of a player is your cousin Paul?

LJ: Just the way he competes. Every shift he’s out there, he’s working his butt off, just competing.  Being a defenseman, I know he kind of prides himself being a defensive defenseman, but he has some offensive upside to his game for sure. He’s a good two-way defenseman and very tough to play against in the corners and in the one on one.  He’s definitely got some offensive abilities too.

EB: What part of your game have you improved upon?

I also interviewed Paul LaDue for this article. Here’s what he had to say about the upcoming season and the prospects playing with his cousin Luke.

Eric Burton: Do you have any thoughts on playing with your cousin?

Paul LaDue: I am excited. It was great to play with him in high school and even more special going to Lincoln with him. We both grew up fans of the Sioux and we watched games together, and I couldn’t be more excited.

EB: Can you touch on your experience playing with the Lincoln Stars?

PL: I loved it down there. The coaches were great; all of the fans, and the people in the area were great. There were two good teams that could have made a run at the championship, but we just fell short. I think as a team we played well. I achieved a lot of goals individually and I had a blast.

EB: Are you nervous at all, being a hometown kid playing for UND?

PL: Obviously there’s a lit bit of added pressure to it. Knowing everyone, everyone knows you, but I am going to embrace it, and obviously I knew that when I committed here. I am excited for that.

EB: What kind of player is Luke [Johnson]?

PL: I feel that he’s a very skilled forward, but he’s two ways. He’s hits, he hits hard and he runs around, and he will create some havoc in the corners. He’s a strong forward and he’ll score too.

EB: What part of your game have you improved on?

PL: Not much has changed. I just tried to work on everything and get better in every aspect of your game. Defensively, I can get better. Offensively, I feel like I improved in Lincoln. The year in Alexandria really helped a lot too for developing and maturing as a player.

They played together in high school, juniors and now they are ready to take the ice as members of the UND Hockey team. The journey begins on October 6, 2013, on home ice, in their hometown.