The Vancouver Canucks are the golden child of BC sports. They are one of the most successful and well supported teams in the NHL and the Canucks could do virtually anything (or nothing at all) and sell-out every game, with the season ticket wait-list growing ever longer. Since the Grizzlies moved to Memphis in 2001, the only other high-profile sports team in Vancouver were the 2011 CFL champion BC Lions. Last year, a third team was added to the professional mix in the form of Major League Soccer’s new boys, the Vancouver Whitecaps.

The original Whitecaps team was founded in December of 1974 and the club has moved around several different leagues and divisions until eventually being granted the 17th Major League Soccer franchise in March 2009. The Whitecaps started their inaugural MLS season at Empire Field, attached to the Vancouver PNE and near the Vancouver Giant’s Pacific Coliseum. On October 2nd 2011, the Whitecaps moved into the newly renovated 21,500 capacity (when set-up for soccer) BC Place stadium fit with a new retractable roof and located in the middle of Vancouver city, next door to Rogers Arena.

While the Canucks look like remaining the most popular sports team in Vancouver, the emergence of the Whitecaps 2.0 in this new season is turning some heads, with an unforeseen consequence of an early playoff exit for the Canucks in April being that fans turned to the Whitecaps for their sports fix two months earlier than last year, creating more interest in the MLS team than ever before.

The Canucks organization can certainly learn some things from the Whitecaps and may need to make some changes to ensure they continue to have the great support they have now in years to come.

Any sports fan that has been a handful of Canucks games and a handful of Whitecaps games will notice the difference between the fans of the organisations. In the lower bowl of Rogers Arena amidst the passionate and endearing fans you will find the “suits”. The “suits” are businessmen and professionals that appear on game nights and stare up from their laptop screens when a goal is scored. An over-exaggeration sure but when a stadium only has just under 19,000 capacity, corporate seats takes up a large chunk of the Arena that could go to families and supporter groups, except that most could not afford the $150+ per person pricing to sit there.

At BC Place, a recent game of spot-the-suit came up with only one winner, Scott Rintoul of the Team 1040 sports radio show and TV analyst. The festivities at Whitecaps games starts with the march through the city to BC Stadium by the Southsider fans, armed with banners and flags and giving the confused tourists around the area a reason to reach for their cameras.

If you are looking for a quiet affair once the game begins, you have come to the wrong place. Though the northern end of the stadium is more family orientated and calm, the south side of BC Stadium comes alive for the entire 90 minutes with singing and chanting from the organised Southsiders supporters group as well as other renegade groups such as the Rain City Brigade and the Prawnsiders.

Much more than a group of random supporters, the Southsiders are the official fan base of the Whitecaps, with a fair membership fee of $30 giving fans an official Southsiders scarf, a Southsiders card with a unique membership number and priority access to the organised away game trips, mainly involving bus transport to Cascadia derby locations such as Seattle and Portland, where in excess of 700 fans make the trip through the border. If you don’t know the words or lyrics to the chants, just look them up on the official Southsiders website!

It is fairly evident that the Whitecaps and MLS soccer fans in general adopt the chants and flag waving from the European clubs while the Canucks fans are watching the game in the more traditional North-American style, however a lot of the lack of atmosphere at Canucks games can be somewhat attributed to the more vocal fans sitting in different sections of Rogers Arena, while the Whitecaps fan groups sit (stand) together, creating more of a sense of community spirit. The same goes when opposition teams come to town, seeing all the Seattle Sounders and Portland Timbers fans singing together in the opposite corner to the Southsiders makes quite a spectacle for neutral fans. 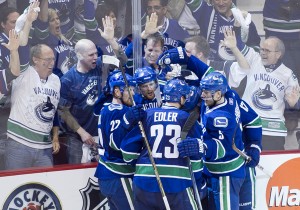 While the Canucks do have their fair share of special fan nights, the only real way to get close to a player as a young fan according to the official forum seems to be to flag down a player’s car as they leave the Arena, which doesn’t exactly seem like the safest method. Most autograph signings now require fans to have a coupon just to enter the line-up, which are usually too long to even consider joining. Watching the warm-up from ice level is a great experience at Rogers Arena but actual player interaction is almost impossible, with players entering and leaving the rink immediately like a well-oiled machine.

In comparison, the Whitecaps players make a point of thanking the fans every game and most will stop to sign autographs for the young fans as well as taking pictures and conversing with the older ones. Seeing players like Davide Chiumiento jump into the crowd and swap shirts with a fan after a dramatic last-minute win and seeing Sebastien Le Toux not only hand over his jersey to a young fan but take off his shoes and socks and give them away as well, makes fans realise their importance and that their support is not taken for granted.

The crowd interaction is not even limited to before and after the game, with players often running towards or at least acknowledging the fans after every goal and players like Camilo Sanvezzo often firing up the crowd with raise the roof signals before taking corner kicks or Eric Hassli, after an off-target shot, making a sniper rifle gesture in the direction of where the ball went. If a fan wants to get in touch with a particular player, just send him a tweet, most will respond directly!

Every team loves a character but nowadays Hockey players just seem to go through the motions. No crazy antics, no being unconventional, just get out there and play the game. While this makes sense from a management point-of-view, many in the crowd would love to see a player show some real emotion and flair, the last player in this category for the Canucks being the late Rick Rypien, who gained many fans from his bouts with NHL heavyweights while weighing only 190 pounds himself, often sending the crowd into a frenzy.

Whatever you think of Eric Hassli, nobody can claim the big man is boring. As fan of his since his FC Zürich days, Hassli has provided entertainment to crowds in many stadiums for several years and is just the type of player that a team like the Vancouver Whitecaps needed to make the transition between a semi-professional USL club and a Major League Soccer franchise.

Known for scoring big goals when it matters, the 6’4 Frenchman provides fans with a bit of everything. At least three of his goals in the past two seasons would make the all-time goal highlight reel, not to mention last-minute heroics that have gained the Whitecaps valuable points on more than one occasion. With 3 Red Cards and 8 yellow cards last season, Hassli has a temper and often the referee is the one to feel his wrath.

Hassli is a one-of-a-kind player with an excess of skill and a lovable, comical personality that the Whitecaps fans warmed to immediately, just like the Zürich fans did back in 2007. From his heavily accented English, to his tattoo’s signifying his life journey, the Eric Hassli chants break out at BC Place most games and he has turned into a true face of the franchise, a name that sells t-shirts.

While the Canucks will undoubtedly remain Vancouver’s number one elite sports franchise, there has been evidence showing more and more fan frustration recently. Following the Stanley Cup final/riot drama of last season and the early playoff exit of 2011/12, the Canucks need to improve some of their off-the-ice product if they are to continue filling their $85+ seats long-term, especially when there are some more affordable $28 seats down the road at a newly renovated, retractable-roof stadium with various fan sections and a great atmosphere. While the Canucks are safe at the moment, younger fans are now being provided more sporting options than ever before and who knows what may happen in the future.