The Dallas Stars have spent years clinging to the edge of success. In the 2013-14 season, the team made it to the NHL playoff race for the first time since 2008, but fell to the Ducks in six games. Later, the 2014-15 season took a turn for the worse as the Stars suffered streaky play. Following a weak preseason performance, fans worried the same fate would befall the team in 2015-16.

However, the rebuilding team shocked the Pittsburgh Penguins with a 3-0 shutout during the season opener. Fans were cautiously optimistic as Dallas steamrolled the Eastern conference to string together both a five-game win streak, and a franchise-best start through October. As the Stars climbed to the top of the Western Conference, and then to the top of the league, they have endured multi-game slumps in play, but have yet to lose two games in a row.

With this recent, and unprecedented success, long-time fans are at a loss. Water cooler talk that once revolved around the Stars’ woes has run dry. Bloggers no longer ponder how Dallas will trade for a “number one defenseman” who hits the team’s cap as hard as he hits opposing forwards. Even Jordie Benn’s play is solid, no longer rendering him the fan whipping boy. Like human sacrifice, or dogs and cats living together, it’s mass hysteria!

Every time Stars fans turn around, they see success. So, what’s a fan to do when they can’t complain about the Dallas Stars? Check out these alternatives.

1. Read Up on Why This Season’s Dallas Stars are “For Real”

Searches for “Dallas Stars for real” yield myriad results, and fans have done plenty of hand wringing, hoping these words won’t rub off the team’s good fortune. Nearly three months into the season, the Stars find themselves sinking into the creamy middle of the good, fun, and moderately lucky trifecta.

Just like the fans who were burned many times before, these articles are still filled with cautious optimism. The team is leading the toughest division with more than one-third of the season under their breezer belts, but it’s natural for fans to find inner conflict. No one wants to hear “we told you so.” No one wants to celebrate too early. Everyone is waiting to see what happens when the Stars play the Canadiens, Capitals, and a few dreaded divisional rivals. The Stars have played a decent enough sample size to say “yeah, they’re pretty good this season,” but there’s still a lot of hockey left to play.

The sheer number of articles I'm seeing like this lately makes me uneasy. https://t.co/DOEFqiedaK

2. Worry About the President’s Trophy (Instead of the NHL Playoff Picture)

Prior to the Stars’ Tuesday night win over Columbus, stats-mongers predicted that the team would  end the regular season with approximately 107 points, and a 99.3% chance of making it to the postseason. A lot can change by April, but for now, earning the President’s Trophy for the most points in the league is a tighter race. With Washington, Los Angeles and Montreal chasing Dallas, the Stars just have to focus on winning one game at a time to hold their place at the top.

If there’s one thing the Stars’ stay-at-home defenseman has perfected, it’s the stretch saucer pass. Sure, the guy deflects some own-goals from time to time and only has seven points on the season, but that’s part of being a stay-at-home defenseman. It’s even listed as a warning on the side panel of the box they’re shipped in (with some assembly required).

The fact is, the elder Benn has worked hard to improve since he fluctuated between league levels a few meager years ago. He functions as a good puck mover and a strong, hard-hitting blueliner who can move bodies in the low slot. Benn will never be John Klingberg, but he’s developing into his role with fewer mistakes, and serves as a strong veteran presence in the locker room.

“He has really done a nice job for us. He has stayed inside his role, he has moved his feet, he has moved the puck quickly – all of the things that have hurt him in the past, he has really focused in on,” Ruff said. “I think the one thing he has tried to take care of is to do his job first. He knows that if he doesn’t play well, then he could come out.” Lindy Ruff, per Mike Heika of the Dallas Morning News

If you haven’t admired the elder Benn’s latest saucer assist, take a minute to bask in this glory: 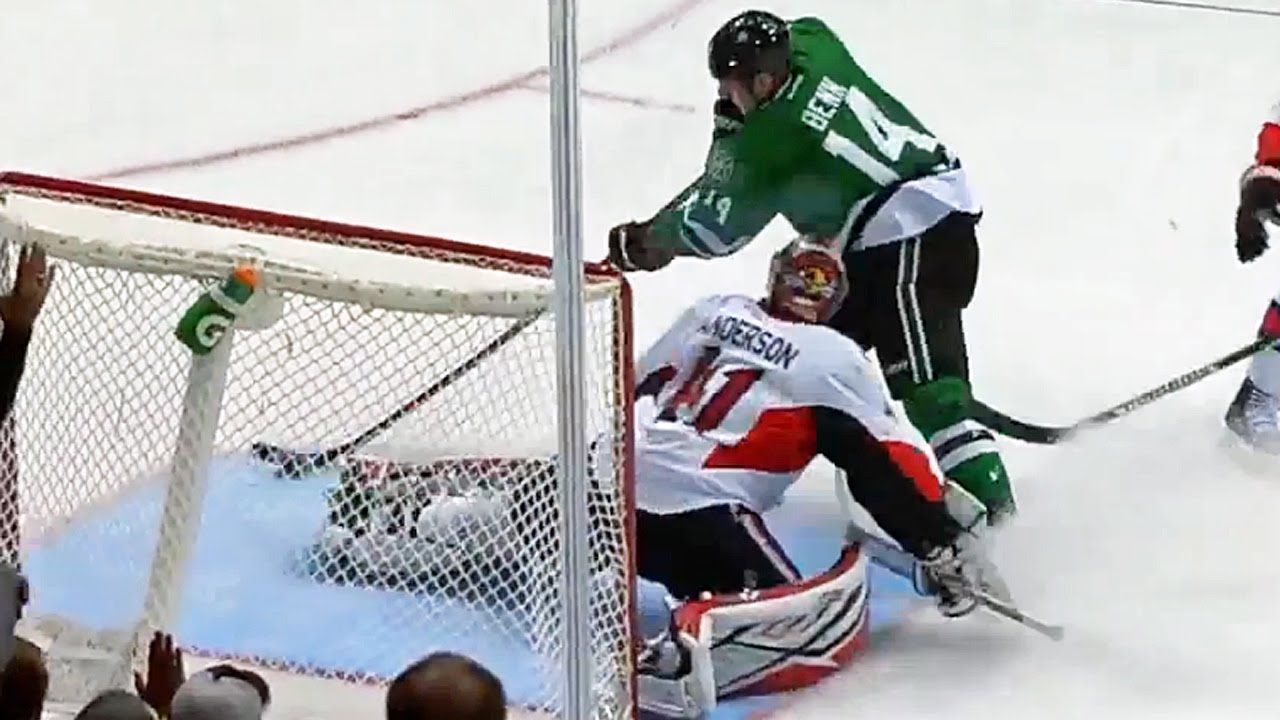 If a broadcaster crushes on Tyler Seguin, that’s a check. When Jamie Benn says the phrase, “pucks to the net,” during the intermission interview, that’s a check. If a commentator compares Klingberg to Sergei Zubov, you better believe that’s a check. This could go on forever.

ZUBOV TO MODANO– I MEAN KLINGBERG TO SEGUIN

Somehow, the Stars players frequently serve as the subjects of entertaining off-ice shenanigans. From Jason Demers’ Twitter take-over (a few favorites are featured below) and offseason dance routine, to Klingberg’s summer cornrows, this team is never afraid to ham it up.

I'm probably having the best haircut in Marbella for the moment. 🇪🇸 pic.twitter.com/wTroj3Yozo

6. Brush Up on Your Vocabulary With Razor

Make Stars Color Commentator, Razor Reaugh, your new word-a-day calendar. The self-described “Hockeyist and Fabulator” is never at a loss for words. Impress friends and family with quotes like the “terrarium of iniquity,” “mastadonic” saves, or “sagacious” plays made by “hirsute” skaters. Just remember to hashtag your favorites as #razorisms to share the fun.

7. Give Your Goalie Some Love

If anything made a difference in the Stars’ 2015-16 season, the goaltending is a top contender. Using a two-starter system (a.k.a. The Two-Headed Goalie Monster), the Stars did away with that pesky, unreliable backup goalie problem they’ve suffered for years. Now, both goaltenders receive ample playing time, rest, and support in net in order to avoid injury, and to play their best game.

Following the Stars’ last win over Columbus, Kari Lehtonen holds an 11-1-0 record, while Antti Niemi sits at 12-5-2. Considering Lehtonen missed three games due to an upper body injury, these game totals are closer than those shared by your average goalie tandem.

4. Kari Lehtonen lunges across the crease to make a beautiful blocker save. #Stars #SixSaves pic.twitter.com/9OahUzAYVK

4. Antti Niemi was pretty great at the other end of the ice for the #Stars. Explosive push on this play! #SixSaves pic.twitter.com/FI8MjqUouy

Each team in the NHL gives their fans a reason to worry. Even at the top, there’s room for improvement, and a lot farther to fall when the inevitable slump hits. However, this is the best time to sit back and enjoy the lead.

When the Stars have a 99% chance of entering the NHL playoff picture in 2016, and the opportunity to take top points, they have some wiggle room to learn on the job. While it’s ideal to remain wary of your team’s pitfalls, relish the lead while it lasts, and remember to have some fun while appreciating all the weird, entertaining facets of the greatest game on ice.