One could be forgiven if they’ve mistaken the penalty box for an airport, because it seems to be the landing place for an awful lot of Winnipeg Jets lately.

This Is a Non-Stop Flight. Destination? Sin Bin.

Indeed, the penalty box has been the destination for more Jets during their eight-game funk — in which they’ve gone 2-4-2 and struggled mightily in every aspect of their game — than Pearson International Airport.

The numbers themselves are uglier than that airport’s arrival and departure board during an ice storm. 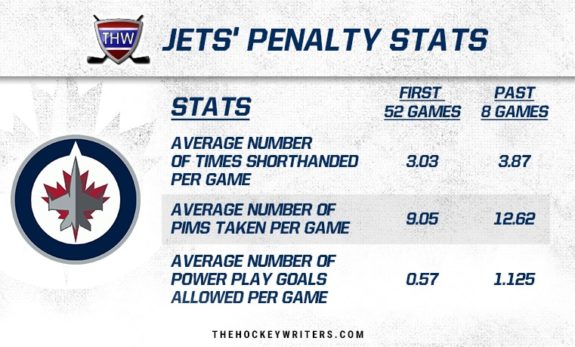 The Jets have given their opponents 31 power play opportunities in the aforementioned eight-game stretch between Feb. 5 and this writing, which equates to them being shorthanded 3.87 times per-game. In that stretch, they’ve taken 101 total penalty minutes, an average of 12.62 per-game.

Those numbers are significantly higher than both the average number of times they were shorthanded in their first 52 games (3.03) and the average number of penalty minutes they took per-game (9.05) in the first 52, as well. Over the past eight games, the Jets have allowed nine man-advantage goals, and their penalty kill is operating at only 70.96 per cent, nearly 10 percentage points below their season-mark of 79.37 per cent.

Despite the ugly numbers, the Jets’ PK personnel has not been atrocious, per-se. Although they were victimized and hemmed in rather easily by the Ottawa Senators and the Colorado Avalanche in their last two matchups — allowing four goals on a combined 19 shots —  they’ve quite simply been asked to do too much, too often.

The most frustrating part about the majority of Jets’ recent trips to the box is that the penalties are careless, selfish and often completely unnecessary. Some of them are borne out of not being able to match the speed and intensity of their more desperate and inspired opponents.

Take Jacob Trouba’s holding penalty in the Jets’ most recent outing against Avalanche — a 7-1 drubbing that was their worst performance of the season, if not in many seasons, and one that Adam Lowry described as “f—ing awful” and “unacceptable” — that allowed the Avalanche to go up 3-0 as one example.

Take Dmitry Kulikov’s hooking minor — one that came only a minute after a Kyle Connor goal and quashed any chance the Jets could get momentum from it — as another. Others are borne out of pure carelessness with the lumber and lack of awareness with the puck. Take Kulikov’s first-period high-sticking double minor that gave the Senators an early lead last Saturday, and his subsequent dunderheaded decision to play the puck before he actually left the box at the end of that double minor which earned him yet another seat as one example.

Take Ben Chiarot’s inexplicable Wednesday third-period decision to loft the puck over the glass on the backhand for a delay of game penalty despite being pressured by no one in particular as another.

Yet others are borne out of pure selfishness and are just symptoms of the ever-worsening frustration disease afflicting the Jets right now. Take Tyler Myers’ decision to get overly feisty in a second-period scrum Wednesday that resulted in a roughing penalty as an example and Trouba’s third-period bone-headed even-up that came as a result of him trying to beat up Mikko Rantanen after the Avalanche forward was penalized for tripping Mark Scheifele as another.

Quite obviously, any trip to the box is a momentum killer. That is especially true for a team playing the way the Jets are — they are grasping to build on any positives they can in order to patch together a few good periods that can help them begin to inject continuity back into their game — one that’s been characterized almost entirely by malaise for most of the month.

The penalties, as Scott Billeck notes above, have also prevented the Jets from seeing if new combinations might be the cure for what ails them. In the third period Wednesday, Paul Maurice brought out the industrial mixer and switched up all of his lines. However, since the Jets took seven penalties in the frame, the new lines’ looks were limited.

Discipline Problem Should Be First Fix

A planeload of problems have either emerged or intensified lately for the Jets (but really, had been looming, yet mostly held at bay, since around Christmas.) This includes a discombobulated and out-of-sync top-six, a sniper who hasn’t scored in 15 games and shows no signs of snapping out of his slumber anytime soon, a power play that was dominant early in the season but has fallen ice-cold and a porous d-corps that’s allowed 35-plus shots in seven out of its past eight games.

The issue of discipline is one of the former — one that has existed all season but had been hidden by the Jets’ immense skill, goal-scoring ability and strong power play. They have taken the fifth-most penalties in the NHL this season and only the Avalanche and Vancouver Canucks average more penalty minutes per-game.

Right now, the Jets’ problems are so multitudinous and wide-ranging that it’s hard to even try and figure out what they should try to fix first, assuming what’s wrong can be fixed at all. As the Winnipeg Free Press’ Mike McIntyre wrote: “right now this looks like a group that has absolutely no solutions.” (from ‘Cup parade? How about a funeral procession instead?’ – Winnipeg Free Press – 02/21/19.)

None of them will be quick repairs, certainly, but the thing the Jets are most equipped to mend right now is their discipline — they are filled with intelligent players, but those players happen to be playing dumb. It’s really just a matter of them playing with speed, taking an extra moment to think and channeling their emotions in productive ways. They have to begin doing those things again if they want to navigate out of the storm clouds and back to clearer skies.

Getting back on the straight-and-narrow won’t fix the rest of the Jets’ foibles, but shoring up undisciplined play would at least allow them a chance to tackle the rest of their laundry list. The top-six isn’t going to gel again if they’re never playing five-on-five. Patrik Laine isn’t going to score and regain his mojo if his team is constantly down a man.

If the Jets can’t divert their flight path away from the sin bin, they’re likelier to continue having to describe their results with expletives than to capture a victory.

Declan Schroeder is a 26-year-old communications specialist and freelance journalist in Winnipeg, Manitoba. He holds a diploma in Creative Communications with a major in journalism from Red River College and a bachelors in Rhetoric and Communications from the University of Winnipeg.