Winnipeg Jets prospect Kristian Vesalainen signed his entry-level contract on Sunday, August 26 after a summer of speculation he might like to stay in Finland. As it turns out, he still has that option. That doesn’t mean he should take it.

The Jets first round pick in 2017 at 24th overall played better than his draft position in 2017-18. He starred for HPK and Karpat in the Finish Elite League, winning a championship with the latter, and posted 43 points in 49 games, among the best numbers for a U20 player ever.

Vesalainen also put his skills on display at the World Juniors as an 18-year-old, posting six points in five games for a somewhat disappointing Finnish squad. All of this culminated in him finally signing an entry-level contract. 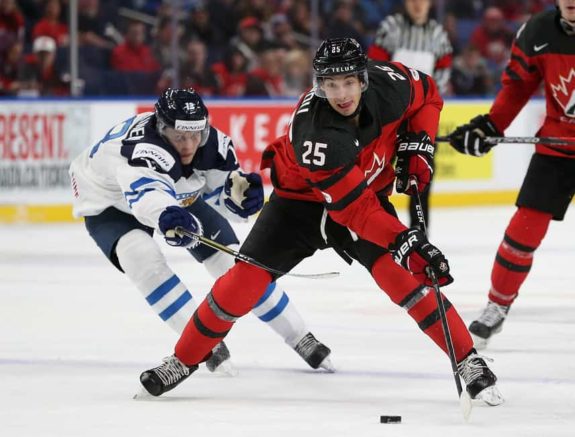 Kristian Vesalainen played in the World Juniors in Buffalo last year and is eligible to return in 2018-19. (Photo by Kevin Hoffman/Getty Images)

Given Vesalainen’s shot (he lines up just like Patrik Laine on the power play, only left-handed) power-forward size and familiarity with the pro game, he seems a strong candidate to make the Jets. If not, his contract has left him some options.

While much will depend on his preseason, I’m inclined to believe Vesalainen has the size and skill to play in the NHL this year. Yet the Jets roster, one of the deepest in the NHL up front, will be tough for a 19-year-old to crack.

This begs the question of where he will play if not in Winnipeg. If the out clause in Vesalainen’s contract is any indication, he’d rather return to Europe. That, however, should not be part of his plans.

If indeed Vesalainen misses the cut and the Jets assign him to the Manitoba Moose, he doesn’t have to look very hard for reasons to stay. His countryman Sami Niku can attest to how useful time in the AHL can be.

Niku moved to the AHL last year, albeit as an older player than Vesalainen is now, and developed from an intriguing prospect to seemingly a future stud. He even got into his first NHL game and scored his first goal in it.

That wouldn’t have been possible for Niku had stayed overseas, and it’s one more reason for Vesalainen to consider staying with the Moose if he’s assigned there. He’s just a short walk down the hall from the big club.

Recent years especially have proven that once a player walks down the hall from the Moose dressing room to the Jets, he can make the switch permanent. Both Kyle Connor and Jack Roslovic began the season with the Moose, but neither stayed there.

Vesalainen has all the tools to make that same jump. The size, speed, shot and offensive awareness are all there. He could potentially dominate the AHL like his countryman Niku did. He could parlay that dominance into an NHL job before long.

If Vesalainen returns to Finland or goes to the KHL as some have speculated, he’s not going to set himself back, just to be clear. Both are still good leagues goodness knows. He does, however, miss out on getting accustomed to North American style.

Perhaps more importantly, he misses out on a chance for a recall. That first NHL game is just an injury or two away if he stays in Manitoba. If he takes the AHL by storm the way he did Finland last year, he’ll easily be on the radar for a shot with the big club.

As mentioned above, the Finnish Elite League is not a poor league. Vesalainen is at the point, however, where he has nothing left to prove there.

As a 19-year-old he put up some of the best numbers for his age in league history. He led his team to a championship. He dominated through much of the season. What more can he do?

Vesalainen now with his 42nd point of the season, passing Olli Jokinen for 4th best U19 season. Aho had 45 points.

The biggest things missing from Vesalainen’s game right now are the things missing from most young players at that age. Consistency, defensive awareness, and familiarity with the pro game are all works in progress. If he’s not going to learn those things in the NHL, there’s no question from a development standpoint what the best league to learn them in would be.

The AHL can chew young players up and spit them out, and it frequently does. It teaches hard lessons, but it also yields results. Just ask Brendan Lemieux about the lessons he learned in his first AHL season and how they’ve fuelled his growth.

If Vesalainen feels he needs to hone his offensive game, then a year in Finland or the KHL won’t hurt him. It probably won’t anyway. But there’s not much doubt where he’s better off learning to play the style he’ll need for the NHL.

Then again, this is all moot if he makes the big club. And frankly, after shooting up the charts the way he did last year, don’t bet against it. Vesalainen could well be a Jet at the start of next year.

If he’s not, he should be a member of the Manitoba Moose. It helped Niku, Roslovic, Connor, and Lemieux, and he can be the latest Jets prospect that AHL time helps put over the top.