Prior to January, Jack Roslovic spent the majority of his time this season on the Winnipeg Jets’ bottom-six, simply as result of the team’s riches up front. Logging less than 10 minutes per game, he had limited opportunities to show off his adept passing, elite vision and wicked shot.

About a month ago, though, his top-six shot finally arrived in the wake of Nikolaj Ehlers’ injury. So far, he’s made good on his increased role and the additional minutes he’s received to strut his offensive stuff.

Roslovic’s now played a dozen games on the second line with Bryan Little and Patrik Laine. His start was tepid, with just one assist in his first six games, but he has really come into his own in the last half-dozen. He is playing an engaged, energetic and confident game and has potted five goals and added an assist in that span.

His presence on the power play has been especially important. While the Jets’ top unit is rightly feared and feted as one of the NHL’s most prolific, it’s the second unit — consisting of Roslovic, Little, Mathieu Perreault, Tyler Myers and Jacob Trouba — that’s been more productive lately. They’ve accounted for five of the Jets’ six power play goals in their four games since the All-Star break, and Roslovic’s been the lamp-lighter for all of them.

“Their breakouts are quick and the puck moves really, really fast with those guys and as you can see they are almost interchangeable in the positions that they get to,” head coach Paul Maurice said of the unit.

In the Jets’ last outing, a 9-3 evisceration of the Anaheim Ducks, the 22-year-old Roslovic scored a trio on the man advantage and logged the first hat trick of his NHL career. 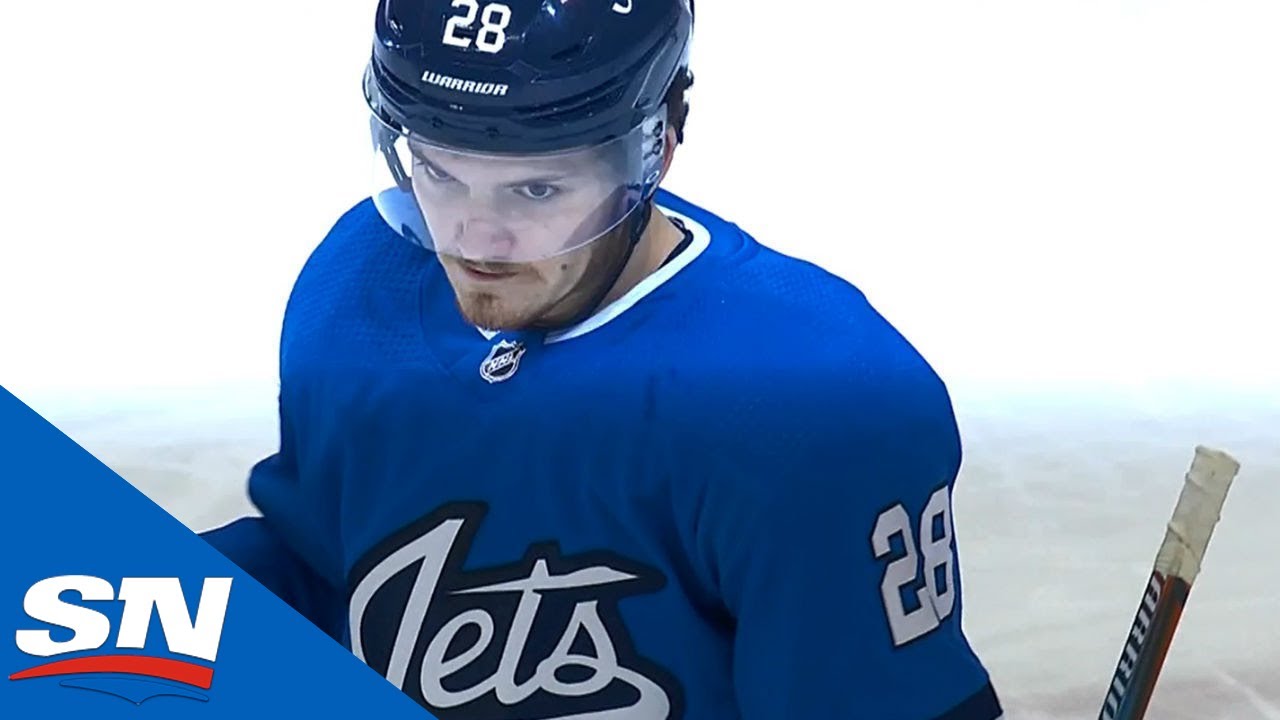 Despite modestly saying “I’m not a big goal-scorer,” after the game, Roslovic possesses a lethally accurate shot in the same echelon as Mark Scheifele and the injured Ehlers. All three of his Saturday night tallies at Bell MTS Place were pure goal-scorer’s goals.

Roslovic is crafty and able to get into open areas undetected. On his first goal Saturday, he slipped behind the Ducks’ defence and put himself into a good position to receive a (gorgeous) stretch pass from Trouba. On his third goal, he put himself in similarly superb spot — in a paltry pocket between four Ducks defensemen — to hammer home Little’s pass blocker-side past Chad Johnson.

It’s no secret Roslovic can light it up when given a chance. He notched 83 points in 97 games for the Manitoba Moose, for whom he scored many slick goals thanks to his explosiveness and shot. When given intermittent top-six minutes with Blake Wheeler, Laine and Little last February, he recorded two goals and six assists in an 11-game span.

Unfortunately for Roslovic, his time on the second line will not be permanent. Ehlers is nearing a return and could be back on the ice in as little as a week. Upon his return, the Jets’ top lines will likely go back to Ehlers-Schiefele-Wheeler and Connor-Little-Laine — what they were before Ehlers went down.

This would push Roslovic back to the bottom-six, where he only recorded eight points before New Year’s Day. It would also have the unfortunate ripple effect of likely pushing fellow 2015 pick Mason Appleton out of the lineup. Appleton’s game is coming along nicely and he has generated three goals and five assists on a fourth line — centred by Andrew Copp and completed by Brendan Lemieux — that has proven dominant, offensive zone possession-wise, at even strength.

While these personnel problems — “we have too much talent!” — are just about the most ideal issues a team could have, they are still conundrums that need to be sorted out, because Roslovic isn’t going anywhere.

“We have heard from a handful of teams who have a genuine interest in Jack and we are aware that several have reached out to (Jets’ general manager Kevin Cheveldayoff),” Rolsovic’s agent, Ken Robinson, said recently. “Jack loves what’s going on in Winnipeg and we are definitely not seeking out trade opportunities. However, it feels good for him to know that he is valued by other organizations, too.” (from ‘Jets shopping Petan, fending off offers for Roslovic’ – Winnipeg Free Press – 02/1/19.)

Yes, there are only so many minutes to go around, but Roslovic has proven he can handle added responsibility with aplomb. He deserves the continued chance to contribute and to be given ongoing meaningful minutes.

This could come in many forms: an increased willingness to bring out the line blender (not that head coach Paul Maurice has even been hesitant to press puree) when the Jets need a mix-up; cycling Roslovic in on the power play or testing out a four-forward, one defenseman second unit akin to the top one; or simply rolling four lines more often.

THW’s own Rob Mahon put it bluntly back in November: “having Roslovic on the fourth line and playing just a few minutes a night increasingly looks like a waste.” That rings even truer three months later.

Roslovic is on the cusp of doing very special things, and kneecapping his progress by giving him only six to eight minutes a game down the stretch would not only be doing him a disservice, but it would be doing one to the entire team — an act of self-sabotage. The Jets must keep Roslovic engaged and primed. Come playoff time, they’ll need his contributions.