The 2017 Young Stars Classic, hosted by the Vancouver Canucks, kicks off this weekend in Penticton. The tournament pits the Calgary Flames, Edmonton Oilers, and Winnipeg Jets prospects against the Canucks. Each team plays each other once in an exhibition round-robin format.

In the past, there have been some notable names, especially in the 2015 tournament when the Edmonton Oilers iced a lineup with Connor McDavid, Leon Draisaitl, and Darnell Nurse. The stars of tomorrow are here, and this year’s tournament isn’t without its star power. 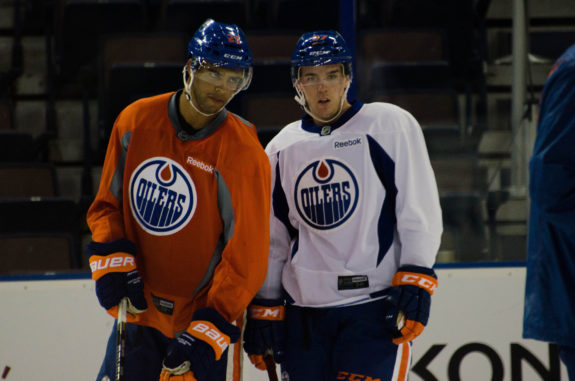 As Larry Fisher put it, there’s plenty of talent in this tournament. The host Canucks might have the best trio of prospects with Thatcher Demko, Brock Boeser, and Olli Juolevi. Vancouver would’ve been deeper had Jonathan Dahlen not caught mono before the tournament’s start.

The deepest team might be the Calgary Flames who’ve got several notable prospects led by two first round picks, Juuso Valimaki and Mark Jankowski. Then there’s the Oilers who’ve got Ethan Bear, Caleb Jones, Kailer Yamamoto and Dylan Wells. Let’s not forget the Jets who’ve got a towering blueliner in Logan Stanley and an offensive dynamo in Jansen Harkins.

Hockey fans are in for plenty of entertainment this weekend. Fans can catch the action streaming on each participating team’s websites.

The Calgary Flames have arguably the deepest goaltending prospect pool in the NHL. To go along with future starter Jon Gillies, the Flames have Mason McDonald, Tyler Parsons and Nick Schneider in their pipeline. Parsons and Schneider turn pro this season.

The Flames will also showcase their 2017 first round pick Juuso Valimaki. Calgary signed Valimaki to an entry-level contract this summer and if he doesn’t land one of the final spots on Calgary’s defense, he’ll be one of the WHL’s premier blueliners in 2017-18. 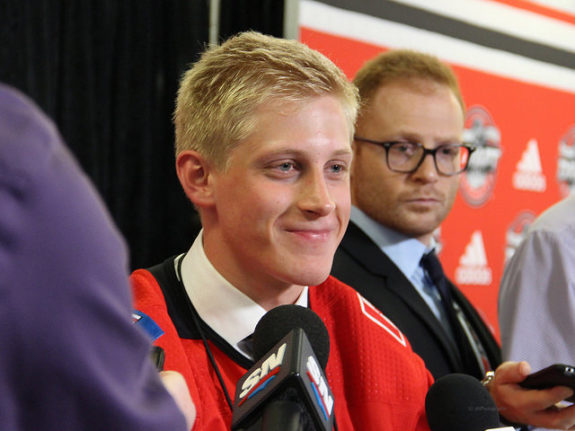 Other notable draft picks in the tournament include Rasmus Andersson, Dillon Dube, Mark Jankowski, Brett Pollock, and Hunter Smith who bring plenty of firepower. The organization will also be showcasing Spencer Foo. If you remember, Calgary and Edmonton were in a bidding war for the college free agent.

The Edmonton Oilers roster is highlighted by a handful of notable prospects. Dylan Wells was one of the better goaltenders in the OHL last season with the Peterborough Petes. A trio of defensemen in Ethan Bear, Caleb Jones, and Ryan Mantha turn pro in 2017-18. These three will be fixtures on Edmonton’s AHL affiliate, the Bakersfield Condors.

Then there’s the biggest name on the Oilers’ young, star roster: 2017 first round pick Kailer Yamamoto. The 18-year-old has an outside shot at making Edmonton’s opening night lineup this season. Failing that, Yamamoto could have a notable year in junior. He’s likely going to be on Team USA for the 2018 World Junior Championships and could lead the WHL in scoring.

Similar to the Flames, the Vancouver Canucks have some gnarly goaltending prospects in their pipeline. Both Thatcher Demko and Michael DiPietro look to be notable building blocks for a Canucks team with questionable goaltending. Vancouver also has two players with the best chance of being NHL regulars this season in Olli Juolevi and Brock Boeser.

Juolevi was a former sixth-overall pick in 2016, while Boeser went 23rd the year before. Boeser played the last nine games of the season with the Canucks scoring four goals and five points. 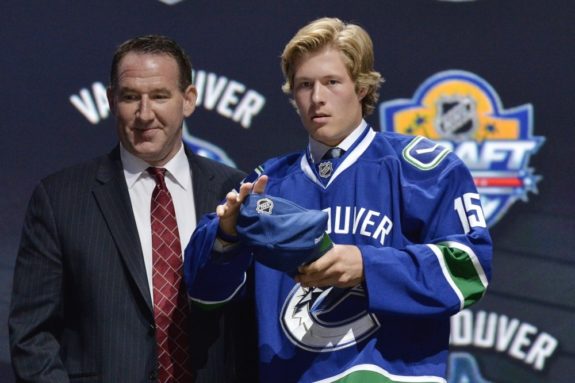 The talent doesn’t stop there for Vancouver fans. Jonah Gadjovich and Kole Lind were both second round picks that look to have great futures ahead of them as Canucks. Gadjovich is a feisty power forward that put up 46 goals in the OHL in 2016-17. Lind was almost a first round pick after his 30 goals this season. He finished with 87 points and could be a top-six forward for the big club in the near future.

Outside of blue-chip defense prospect Logan Stanley, the Winnipeg Jets don’t have a whole lot of star power in this tournament. That being said, they do have some underrated players. Jansen Harkins is their best forward coming into the tournament and he’s flanked by some prolific scorers from the CHL last year. 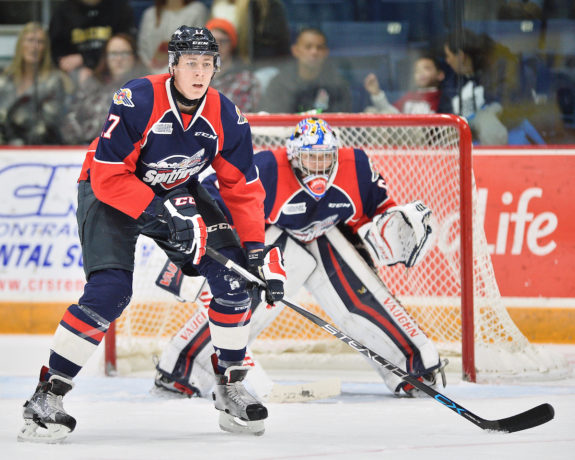 Skyler McKenzie, Michael Spacek and Tyler Boland all eclipsed the 80-point plateau in junior during the 2016-17 season. McKenzie and Spacek are both late round finds by Winnipeg’s scouting staff. Boland is an invitee, but he’s not the only notable one. Kameron Kielly scored 34 goals and 74 points for Charlottetown last year.

An interesting note is that forward Mathieu Sevigny played in this tournament last year, but with the Flames.