By every season’s end, there’s at least one player who breaks out in remarkable fashion, putting up totals that even star players might have difficulty sustaining.  This player provides an incredible edge in many fantasy formats and is likely the reason as to why the fantasy champion is collecting either bragging rights or cash come mid-April.  One might recall Joe Corvo’s 2007-08 performance of 25 points in his last 29 games or Lee Stempniak’s 2008-09 campaign of eighteen points in his last eighteen games after being dealt to the Coyotes.   In 2009-10, Peter Mueller put up 21 points in sixteen games following the All-Star break.  Last year, Andy McDonald ended the season with 33 points in his last 33 games.  Who will it be this year? 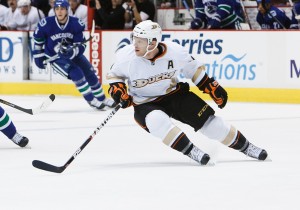 Saku Koivu is a second-half breakout candidate. (Icon SMI)Like the Mighty Ducks, it takes a while to find their ‘Flying V’

The white-hot Ducks have accumulated an 8-1-1 record in their last ten games.  However, the offense isn’t coming at the strength it has in years past.  Traditionally, Getzlaf, Selanne and Perry average over a point-per-game, but even with the tear they have been on as of late, they still haven’t been able to manage a point-per-game.  This is where we take a positive spin on it and dive into the Ducks’ second-half numbers.

Last season’s MVP, Corey Perry, had 51 points in 52 games prior to the All-Star break and then managed to get 47 points in thirty games following it.  He also scored an even amount of goals in both stretches but in 22 less games.

Before last season’s vacation, Ryan Getzlaf had 37 points in forty games and 39 points in 27 games following it. In his career, the Balding Duck averages 1.02 points per game following the All-Star break, but only 0.9 points-per-game before the week off.  Another interesting stat on the Ducks captain is that he has only two game-winning goals before the break and has ten times as many following it.

The Finnish Flash, Teemu Selanne, like the Ducklings, is a tremendous producer following the mid-season hump.  Last year, he scored sixteen goals after the all-star break and only fifteen prior to it.  Following the event, in which he is normally a participant, Selanne averages 1.14 points-per-game while producing just 1.01 points-per-game before it.

Outside of Montreal or California, an interesting name that is often disregarded in the fantasy world is Saku Koivu, Mikko’s older brother.  As a notorious second-half performer, Saku managed eighteen points in his final 24 games last season and only 27 in his first 51 games.  Moreover, two seasons past he had nineteen points in his final eighteen games while producing only 33 in 53 games to begin the year.

For Buffalo fans or fantasy owners this season, the Buffalo Sabres have been anything but a pleasure.  The Sabres currently sit tied in last place in the East and have a 2-7-1 record in their last ten contests.  Like the Ducks, the one positive piece on the team is that many of the players are ALL strong players in the second half.  Vanek, Roy, Stafford, Boyes, Leino, Pominville, Ehrhoff, Ennis and Myers all perform mightily better to end the regular season.

With regards to fantasy hockey, perhaps the most interesting to note is the performance of Sabres forward, Tyler Ennis. The 22 year-old broke out into the NHL for a 10-game stint two seasons ago, not disappointing with nine points and a plus-one rating.  He also managed to put up an impressive 65 points in 69 games for the Pirates in the AHL.  Last season, he was one of four twenty goal-scorers for Buffalo and placed in fourth in rookie scoring.  This season, he struggled off the draw with a dismal five points in fifteen games.  He also faced injuries and some in-team competition with Buffalo’s off-season added depth of Leino and rookie, Luke Adam.  The reason to now take a look at Ennis is that he practiced yesterday on the team’s top powerplay unit and last season, his play picked up by 0.06 point- per-game in the second half.

Drew Stafford is also another player who drives hard in the second half.  Stafford found a way to put up a pro-rated 69 points last season, but has less than 0.5 points per game this season.  Stafford has been playing top minutes for Buffalo and last season he put up 28 points in 31 games following the All-Star break, not to mention a plus-fifteen rating.  Looking at Stafford’s stats prior to the break, he only managed 24 points in 31 games while maintaining a minus-two rating.  Over his career, he has 0.7 points-per-game in contests following the All-Star break, and a 0.55 point-per-game prior to it.

This season, Thomas Vanek has been one of the few players in Buffalo to perform up to usual standards. Contrary to the article I posted last week, Vanek is in fact quite a valuable piece to any fantasy team, come the second half.  Last season, Vanek had 32 points in 31 games following the All-Star game and only 41 points in 49 games prior to it.  Compared to the first half, his plus-minus rating was also 28 points higher. Although, keep an eye on Vanek’s health as he left last night’s game with an upper body injury.

Henrik Zetterberg and Jiri Hudler – Henrik Zetterberg has less points in the second half, but a much greater point-per-game average.  In 2006-07, ‘Z’ managed 28 points in fourteen post-All-Star contests and averaged 0.98 points-per-game in the second half compared to 0.90 points-per-game in the first.  Jiri Hudler’s first and second-half numbers are similar for his career, but last season he put up nineteen points in eighteen games following the break and only eighteen points in his first 44. These two Red Wings play on the same line along with Val Filppula.

Sam Gagner and Tom Gilbert – Sam Gagner is a second-half stud year after year with 0.75 points per game in his post-All-Star Game matches and only 0.51 points per game prior to them.  In 145 less games in the second half than the first, he has sixteen powerplay goals compared to the fifteen powerplay goals before the week off.  A top-six spot is likely opening up by the trade deadline with Ales Hemsky being one of the most talked about players on the market.  Tom Gilbert is in fact a viable fantasy hockey alternative when it comes to the season’s second half.  In 2009-2010, he was scorching hot to end the season with twenty points in 21 games.  Pair this with the chance that Ryan Whitney’s doing everything and anything to get back to the ice, even if it means a bubble-wrapped foot and Gilbert could have a similar point turnout as in 2009-10.

Mark Streit and John Tavares – In this Swiss native’s last full season, he put up eighteen points in twenty games following the All-Star break.  He averages 0.72 points per game after the hump compared to the 0.53 prior to it. Tavares has been red hot and it will likely continue as he has averaged 0.96 points-per-game following the All-Star break compared to 0.76 prior to it.  His numbers are only a few years deep, but this bodes well for the Islanders powerplay and all offensive numbers on the Island.

Jason Spezza and Milan Michalek – This pair of All-Stars may just be getting started offensively.  Spezza’s point totals are about one-tenth higher in the second half and even last season, he didn’t get hot until everyone took the week off to relax.  He put up 37 points in thirty post-All-Star contests last year.  Michalek is no different as he has averaged 0.7 points-per-game following the break and 0.6 points-per-game prior to it.

Ryan Kesler and Chris Higgins – For the past couple of weeks, Kesler has been struggling offensively but hopefully there will be an upward trend for the Michigan native following the hockey hiatus.   Kesler averages 0.7 points per game in the second half compared to the 0.57 points-per-game prior to it.  In his career, Higgins has put up 0.55 points-per-gane post-All-Star break compared to the 0.46 points-per-game before the game.   With the addition of David Booth, the offensive point totals for Vancouver’s secondary scoring can only improve.

T.J. Oshie, Patrik Berglund and Andy McDonald – The Blues have been playing at an unexplored level since the arrival of Ken Hitchcock.  Not even the Al Macinnis, Brett Hull and Brendan Shanahan days could compare to what they are doing now.  Oshie, Berglund and eventually, McDonald, hope to continue on this tear, with their second half career-totals proving their trip to the top of the leaderboard is possible.  Oshie averages 0.74 points post-All-Star break compared to 0.63 prior to it.  Berglund averages 0.59 points-per-game in post-All-Star contests and only 0.49 prior to it.  Finally, the former Duck, Andy Mac’, exploded last season with 33 points in his second half compared to only seventeen points to start the season. McDonald returned to practice earlier this week without the non-contact jersey.

As the NHL season concludes, the players listed below are all worth a look in any fantasy league.  These players have all busted out at one point when looking at second-half statistics.