As the 2013 calender year comes to a close and the 2014 year begins, The Hockey Writers continues to rank all 30 American Hockey League teams every week. The Springfield Falcons top the list this week, with the least amount of losses in the league. Search for your favorite team below.

Sitting atop the league in winning percentage (.767), the Falcons have only five regulation losses this season. Their offensive attack is very spread out, with no scorers in the top 20 in points. Jake Hansen is tied for first in the league with three shorthanded goals.

After winning the Calder Cup last season, the Griffins continue to torch the competition around the league. Although they fell to Toronto in the AHL Outdoor game in a shootout, the club continues to roll, going 6-3-0-1 in their last ten games. Teemu Pulkkinen leads all active skaters with on Grand Rapids with 26 points in 32 games.

Currently the top seed in the Eastern Conference, the Monarchs face a demanding schedule this week. They face three East Division teams, along with a home contest against a Providence team loaded with NHL prospects. Forward Jordan Weal leads the team with 27 points in 34 games.

Calgary Flames forward prospect Ben Street is fifth in the AHL with 32 points to lead the fifth ranked offense in the league at 3.35 goals per game. The Heat are 13-0 when leading after two periods.

After a few less than fulfilling seasons, the Devils have played very well as we near the halfway point of the 2013-14 AHL campaign. They’re 16-0-0-1 when leading after two periods and are second in the league in shots allowed per game, at a meager 26.06 per game.

Upcoming Schedule: January 3rd vs. Springfield and 4th at Adirondack

The Senators have a one point lead in the East Division over the Penguins and enter this week on a four game winning streak. They’re second in the league offensively, averaging 3.57 goals per game. They have a strong 5-2-0-2 record when tied after two periods.

Dallas’s AHL affiliate has been paced by two dynamic scorers, who are first and second in scoring. Travis Morin and Colton Sceviour have a combined 62 points on the season and Morin (39 points)is six points ahead of the next highest point getter.

After treading through rough waters to begin the season, Chicago is hitting their stride as they head into 2014. They enter this week on a six game point streak and have 15 standings points in their last ten games. Forward Corey Locke leads the team with 24 points in 31 regular season contests.

Although they’ve been decimated by call-ups to the NHL due to Pittsburgh Penguins injuries, the Baby Pens continue to play well in the East Division. Defenseman Brendan Mikkelson leads the Penguins’ defense with 18 points, also placing him 13th in defenseman scoring.

The Admirals have been one of the more consistent AHL franchises this season and currently place fifth in the Western Conference. They’re 6-3-1-0 in their last ten games and enter this week following a win. Defenseman Anthony Bitetto is seventh in the AHL in defenseman scoring with 19 points in 29 games.

Buoyed by two of the top young net minders in the league, Norfolk sits seventh in the Eastern Conference. They’ve won three straight contests and have a 6-3-1-0 record in their last ten games. John Gibson has a 10-8-3 in 24 games in net with a 2.46 goals against average and .922 save percentage. Frederik Andersen is currently playing in the NHL with the Anaheim Ducks, Norfolk’s parent club.

@NorfolkAdmirals have reassigned D Mike Little to @FL_Everblades Little was scoreless in three games played w/ NOR during his Nov. 30 recall

Although they’ve been outscored by 11 goals this season, Colorado’s AHL affiliate has been playing well of late and sit in the final playoff spot in the Western Conference. Bryan Lerg leads the club with 25 points in 30 games, but has a team worst minus 21 rating.

After nabbing the top spot in the Eastern Conference last regular season, Providence has yet to return to their dominant form from last year. Ten of their 32 games have gone into overtime or a shootout and they’ve gone 5-5 in the extra frames.

After their shootout victory over the Griffins in Detroit in the AHL Outdoor game, the Marlies enter their remaining schedule of this week at the top of their division. They’ve outscored their opponents by then goals on the season and have been in overtime or a shootout in just three of their 30 games played. 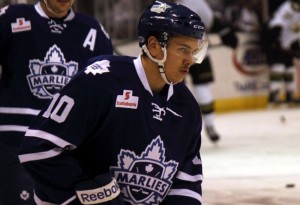 Philadelphia’s affiliate has played well to this point, but could face a tough battle in the coming weeks due to injuries to goaltender Yann Danis and defenseman Cullen Eddy. Flyers forward prospect Jason Akeson leads the team with 23 points in 30 games.

Strong first periods have been the key for Rochester who are without former goalie David Leggio who joined the Washington Capitals organization this offseason. They’ve outscored teams by ten in the opening frame even though they’ve been outshot by 23 in the opening stanza of regulation.

Upcoming Schedule: January 3rd at Utica and 4th at Hershey

The Pirates are of the up and coming teams in the AHL, led by young Phoenix Coyotes prospects. They’re 5-3-0-2 in their last ten games and have been aided by their fourth ranked penalty kill, clicking at an 87% clip. Forward Andy Miele is 14th in the league with 27 points in 26 games.

One of the more inconsistent teams in the AHL this season, Hershey has won back-to-back games at home just once this season. Defenseman Julien Brouillette leads all AHL blue liners with a 31.3 shooting percentage, with five goals on 16 shots.

Upcoming Schedule: January 3rd at Adirondack, 4th vs. Rochester and 5th vs. Manchester

Montreal’s AHL affiliate enters this week on a four game point streak (3-0-0-1) and sit seventh in the Western Conference. The Bulldogs have an average 10-10-0-1 against teams in their own division.

Part of the reason for the Sharks inability to pile up standings points has been their struggle to score the first goal. They’ve scored first just 11 times in their 28 games this season, but have a 7-2-1-1 when they do tally the first goal. Freddie Hamilton, Daniil Tarasov and Bracken Kearns all have 18 points this season.

Like Hershey, Syracuse has struggled in the talented East Division. They recently added veteran AHL forward Jon DiSalvatore, but have a 2-6-0-2 record in their last ten contests. The departure of key young players to the Tampa Bay Lightning has been critical in their plummeting winning percentage.

In their first year in Iowa, Minnesota’s AHL team has treaded water and sit currently five points out of a playoff spot. Rookie winger Erik Haula leads the team with 16 points in 22 games this season.

Upcoming Schedule: January 3rd at Rockford and 4th at Chicago

The IceHogs’ freefall continued Monday night, with a 3-2 loss to the Charlotte Checkers. Rockford has just one standings point in their last five games. They’ve been perfect in overtime and shootouts (3-0) and have given up 118 goals, tops in the American Hockey League.

After sitting in the Western Conference cellar at the beginning of the year, the Checkers have played well enough to make a small climb up the ladder. They’ve gone 6-4 in their last ten games, helped by their 5-3 record when tied after two periods.

Ever since Ryan Strome was called up to the New York Islanders, things continue to go south for the Sound Tigers. They’ve been outscored by 23 goals this season and enter this week on a one game winning streak. They allow 3.24 goals per game, 28th in the league.

The Barons have the second most regulation losses in the AHL and things aren’t getting any better. They’ve lost three straight games and are 2-6-0-2 in their last ten games. They’ve yet to win in overtime or a shootout, going 0-5 beyond regulation.

Florida’s AHL affiliate is playing like the Panthers did in the NHL last season, near the bottom of the league. The have just two wins in their last ten games and are 24th in goals per game at 2.52 per contest.

With Chris Kreider and J.T. Miller up in New York, Danny Kristo is the focal point of the Hartford offense moving forward, but he can’t do it all himself. The Wolf Pack are last in the league in goal scoring (2.32 per game) and 27th in goals against, allowing 3.23 shots in their net per game.

Another relocated franchise, Utica has gotten better following a terrible start in New York. They’re 29th in goal scoring at 2.38 per game, but have a 4-5-0-1 record in their last ten games, a vast improvement from their results earlier this season.