The month of November saw the Albany Devils turn back the clock. Yes, there was an Albany River Rats throwback night, but there was something else familiar with this team. Much like their predecessors from a season ago, these Devils are tenacious and winning with regularity.

Albany finished November with a ledger of 6-4-0-1 (13 points). Overall the A-Devils are 12-6-1-0 (25 points) with a .658 winning percentage and are in second place in the North Division, trailing the Syracuse Crunch. If the Calder Cup playoffs began today, Albany would qualify and have home-ice advantage in the first round. At this point last season, Albany sported a record of 12-4-3.

The Devils closed out November with a point in each of their final four contests.

Much like last season when they boasted the league’s highest home win percentage, these Devils appreciate home cooking. Chalk it up to the new LED lighting at Times Union Center if you’d like, but Albany is absolutely shining at home. Albany went 4-0-0-0 at home in November. On the whole, Albany is a league best 8-1-0-0 on home ice with a .889 winning percentage. Dating back to October, Albany has recorded victories in five straight contests at home.

After a solid October, the Devils’ rookie forward ramped it up in November. Quenneville tallied three markers, eight helpers and eleven points. The A-Devils’ center posted points in the final five consecutive games of November, including two straight games with a goal and two helpers. Quenneville leads Albany with seven goals, ten helpers and 17 points. Quenneville’s 17 points rank tied for eighth in the AHL and are tied for first among AHL rookies.

Blender picked up the pace in November. Blandisi notched four goals, eight assists and 12 points. The Devils’second-yearr forward has points in eight of his past nine games. Blandisi ranks second on the squad with 15 points.

And now a free tutorial on how to score on a 5-on-3 power play #UnitedInRed pic.twitter.com/7zl7dVJluQ

These Devils have plenty of skill and they’re also a gritty bunch. Albany leads the league with 391 penalty minutes. The 1993-94 River Rats racked up the most team penalty minutes by an Albany team, totaling 2,661, second in the league by one minute, behind the St. John’s Maple Leafs.

When you’re penalized as much as the Devils have been, you’re going to need a great penalty kill. Albany has plenty of practice working short-handed this season. At 84.6%, the Devils’ penalty kill ranks fourth in the Eastern Conference and tenth overall.

One could argue their victories against Hershey and Toronto were better, but their 4-2 victory against Rochester on Nov. 26 was a feel good win. With New Jersey GM Ray Shero in attendance, the “River Rats” put on a dominant clinic, staking themselves to a 4-0 advantage on tallies from Miles Wood, Blandisi, Blake Coleman and Quenneville. 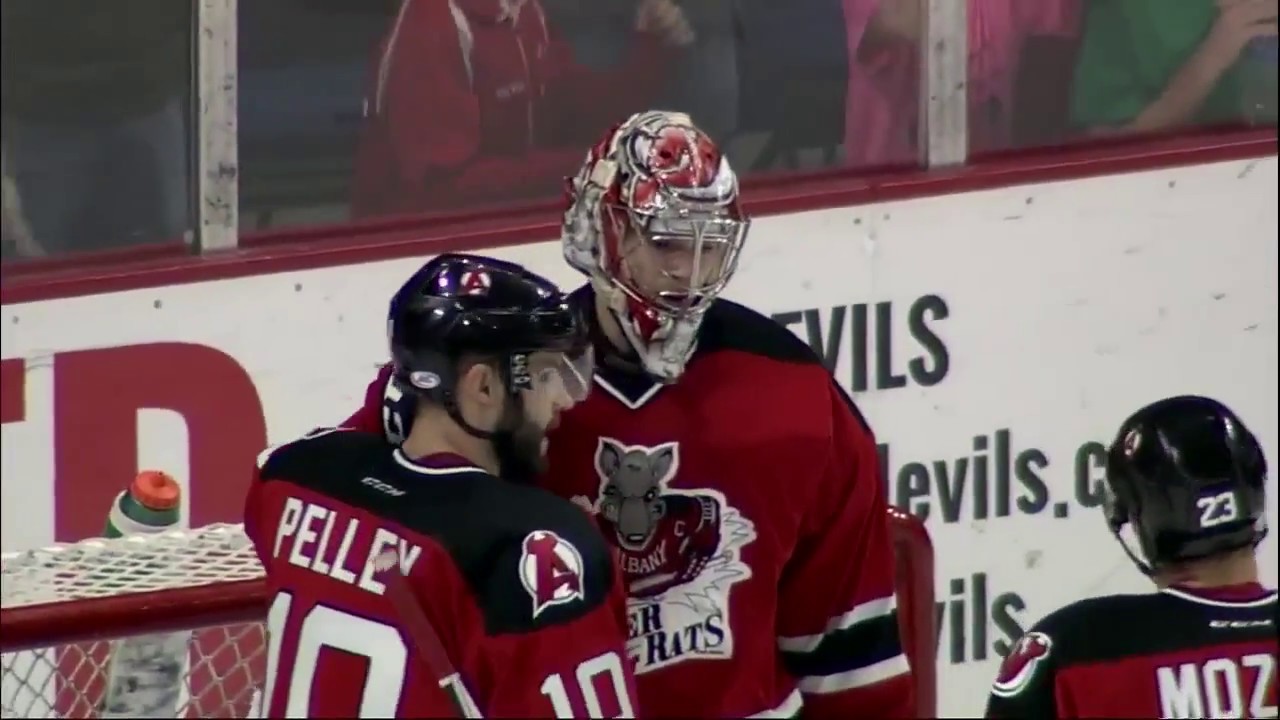 The A-Devils’ top netminder is out at least six months after undergoing successful surgery for a torn labrum. Emerging as a number one goalie, Wedgewood has been snake-bitten with injuries in his young career. This season Wedgewood had registered a 2.18 goals-against average and a .912 save percentage.

Looking at approximately six months. This is a massive loss for Albany and leaves New Jersey without their top recall option in net. #AHL https://t.co/PBJPChn2tM

Ken Appleby has been solid since his recall from the ECHL Adirondack Thunder, while Mackenzie Blackwood is still a raw rookie at this point. It makes one wonder if the Devils will add another veteran goalie for insurance.

Much like their parent club in New Jersey, the A-Devils are not quite as powerful on the road. In ten road contests, Albany sports a record of 4-5-0-1, for a .450 winning percentage.

In a 6-2 loss at the Binghamton Senators, the Devils surrendered four goals in the first five minutes of the first frame. This one was over before it started and resulted in a quick trip to the showers for Blackwood, who yielded the first five goals.

Moving into December, Albany finishes off the 2016 portion of the schedule with 13 contests. In a pretty even split, the A-Devils play seven at home and six away. Familiarity breeds contempt, as Albany faces Utica, Binghamton, and Toronto three times and Providence twice. Albany caps off the month at Hartford.