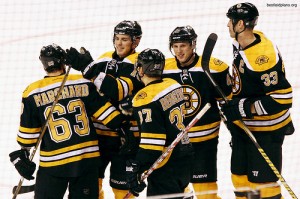 On Sunday, the Boston Bruins clinched the Northeast Division title with a 2-1 win over the New York Rangers, the reigning number one seed in the Eastern Conference. With the win, they would lock themselves into the #2 seed with three games still remaining. Although the number may indicate that the Bruins are the second-best team in the Conference, their overall record says otherwise.

Tell me who you think the top two teams in the Eastern Conference are. Here, I’ll answer my own question;  it’s the Rangers and the Pittsburgh Penguins. Think again about who the top three teams are and you’ll hear some arguments for both the Bruins and the Philadelphia Flyers. However, many would believe that a trip to the 2012 Stanley Cup Finals runs through either the Consol Energy Center in Pittsburgh or Madison Square Garden in New York City. The Bruins might be the defending Stanley Cup champions, but they’re already the underdogs to repeat as Eastern Conference Champions, let along back-to-back Cup winners.

This is accurate. The Bruins are underdogs. Again.

They were last year, too.

There are plenty of differences with this season’s Bruins team compared to the roster that won the 2011 Stanley Cup. Tim Thomas has also shown that, while he’s still capable of making game-changing saves, he’s human. There’s no jacket to pass around this season, no veteran leadership of Mark Recchi in the locker room and no Nathan Horton, capable of scoring clutch goals.

Instead, the Bruins have a team with more chemistry, a more balanced blue-line and the chance to reap the benefits of Tyler Seguin’s progression into a two-way player and a legitimate scoring threat.

Similarly to 2010-11, the Bruins aren’t one of those ‘top two’ teams in the East. A year ago, it was the Penguins and Washington Capitals that were deemed as the beasts of the East, both destined to be playing for the Cup in June with plenty of “History Will Be Made” commercials to follow. Guess nobody expected the Tampa Bay Lightning to come around and eliminate them both.

But think about this: would the Bruins have advanced to the Stanley Cup Finals last season if their paths crossed with the Pittsburgh Penguins or Washington Capitals? Who knows. The underdogs got lucky then.

The Bruins weren’t the sexy pick to represent the Eastern Conference in the Stanley Cup Finals last year. On paper, they were a rugged bunch with stellar goaltending and solid depth. They were tough–able to shift the momentum of a game with one, big hit. It’s what they did. They rewrote the entire script of the 2011 playoffs, defying odds by winning three game 7s and ultimately upsetting the Presidents Trophy winners, the Vancouver Canucks, on their home ice. Last year was special because few could imagine in April what the next eight weeks would hold.

One year later, it’s possible that there’s this false sense of hope stemming from the belief that what happened last season could happen again. The Bruins weren’t expected to make much noise in the postseason, especially after falling behind 0-2 in the opening round against the Montreal Canadiens, and look what happened. As soon as the Bruins begin to struggle this postseason, many will think of last year: how everything clicked, how Boston got all of the right bounces and how anything was possible. While it’s true that anything can happen, it’s important not to get engulfed in the romanticism that was the 2011 playoffs.

The Bruins are in a position where they are underdogs in the Eastern Conference again. Unless a surprise team is able to eliminate both the Rangers and Penguins (hint: not happening), either team could be a potential opponent for the Bruins if they advance past the first round. Will the B’s get lucky again this year? Maybe, but it’s going to be a lot harder this time around.

3 thoughts on “Are the Bruins underdogs in the Eastern Conference again?”