One of the National Hockey League’s top concerns of the past several years has been the steady decline in scoring. Many schemes to reverse the trend have been bandied about, such as smaller goalie equipment, larger nets, applying the icing rule to power plays, and so on. From general managers to fans, it seems everyone has ideas for rule tweaks to increase scoring.

How the NHL Schedule Impacts Scoring

(Note: All goal averages are adjusted for overtime/shootouts.) The 2015-16 season saw scoring dip to 5.22 total goals per game, the lowest number since the pre-lockout 2003-04 season’s 5.03. There’s cause for hope, however, as a close look at last season’s schedule reveals a fascinating trend:

League-wide, an above-average number of goals were scored in the first home game following a two- to five-game road trip.

In some cases, the difference was quite significant, as this chart shows (six- and seven-game road trips are included, but those sample sizes are too small to warrant serious consideration): 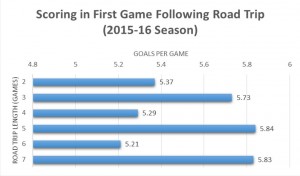 The results following three- and five-game road trips are particularly interesting, as they represent increases of more than half a goal above the 2015-16 average. These games had a noticeable impact on the season as a whole: In 81 contests following a three-game road trip, 471 goals were scored. Without those games (and goals), the NHL season average drops from 5.22 to 5.18. Subtract the games and goals scored following all two- to five-game trips, and the number falls even further, to 5.11.

Also of note, the increased scoring can’t be attributed merely to the home club, worn out from travel, allowing more goals: Home teams compiled a record of 46-28-7 in the first game following a three-game trip. That’s a win (points) percentage of .611, compared to the NHL average home win percentage of .587. What is happening here?

To better understand the impact of travel on players, I contacted Dr. Adam Naylor, a Player Development Consultant with Telos Sport Psychology Consulting. Based in Boston, Naylor has extensive experience working with athletes in many sports, including hockey players. He was kind enough to answer a few questions recently.

The Hockey Writers: Can you explain the impact of travel on the mental and physical preparation and performance of hockey players?

Dr. Naylor: Depending on the duration and nature of the travel, hockey players can be impacted physically, mentally, emotionally, and socially. Physically it can change sleep patterns, hydration, and time spent in healthy postures. Mentally there is the impact of sleep change that can influence focus, decision making, and ability to regulate emotions. Furthermore, the simple stress of travel can take its toll depending on travel arrangements. Lastly, travel can take a person away from family and support systems – depending on where an athlete is in life will depend on how much this shapes attitude and performance.

Dr. N: Time zone travel can impact a bodies’ daily rhythms. With the sun rising and setting at different times, internal clocks are set out of whack and often take a bit of time to adjust. High-level teams can often take much of this into account, by either keeping players on their “home” time zone during relatively brief trips or planning in an extra travel day or two for adjustment. For short road trips across only a time zone or two, keeping one’s schedule close to their “home” time zone seems like a viable option. For trips of greater length time-wise and/or geographically, planned adjustments can be useful.

THW: Are these impacts cumulative – does a longer road trip have a greater impact than a shorter one, and/or do those impacts level off after several days on the road?

Dr. N: I think the wise answer to this question is, “It depends.” Sleep patterns can likely be reset with a longer period of time in a new time zone. Habits and routines can re-established if there a home base is created for a length of time. This all said it is tough to replace one’s own bed, the home environment where daily routines are set (i.e. coffee and the newspaper before heading out the door) and being surrounded by one’s own family.

THW: What sort of adjustments must a player make upon returning home from a road trip?

Dr. N: So much of this is really just re-integrating into “normal” home life. For older players with spouses and family, this is often spent getting back to doing “ordinary” person stuff – driving kids to school, helping out around the house, etc.

THW: What differences should we expect to see (in terms of player/team performance) in the first game following a road trip vs. an average home game?

Dr. N: After a road trip, one may be physically tired yet feel a mental and emotional nudge. To be back into comfortable routines and onto home ice can provide a welcome familiarity. While NHL players travel well these days, there still is “no place like home.”

“Globally on this topic, I think professional sport is doing a good job trying to minimize the impact of travel from a sleep, hydration, and nutrition standpoint. It is interesting to see how players themselves (and perhaps in some instances teams) consider the social-emotional impact by trying to get players home, into their personal/family routines, and into their own beds as often and regularly as possible.”

To paraphrase Naylor, NHL road trips are all about disruption and mitigation. Teams and players do their best to combat the effects of travel, but often return home fatigued and, if they’ve traveled across time zones, disoriented. How does that lead to increased scoring? Most likely, it comes from the “mental and emotional nudge” players get from returning home, coupled with the benefit of breaking from routine, of “shaking things up” by hitting the road. The question, then, is: How can both the league and players use this information to maximum benefit?

The Three-Game Roadie: Everybody Wins

Though scoring in the NHL has benefited somewhat from the “road trip effect,” a change to the way road games are scheduled could increase scoring significantly. Here’s how it could work:

Each team currently plays 41 road games per season. Given the goal averages in the above chart, scoring could be maximized by requiring each team to complete their road schedule in exactly 12 three-game trips and one five-game trip. Following that schedule would, on average, increase scoring by 6.74 goals per team over the course of the season. While it may not seem like much, that’s roughly 200 goals, enough to raise the NHL’s per-game average from 5.22 to 5.38.

Players would benefit from the schedule change in two ways: First, from a slight reduction in travel miles and a significant reduction in the total number of road trips. In 2015-16, the Florida Panthers had the fewest roadies (13), while the New Jersey Devils spread their 41 road games over a league-high 27 separate trips. Overall, Western Conference clubs averaged 16.5 road trips, while Eastern teams, with more single-game excursions, averaged 20.25. For players, compressing travel schedules would minimize disruptions to home life.

Second, even a slight increase in scoring could benefit players on expiring contracts. While I don’t know the average salary of 18- vs. 20-goal scorers, or 27- vs. 30-goal men (and that’s probably an article unto itself), that’s the potential difference to consider.

All figures in this article are from the 2015-16 regular season. That’s a small sample size, so further study is necessary. On the surface, though, it’s an intriguing idea. Before changing the way the game is played, why not change the schedule?

Matt blogged about all things hockey at On Goal Analysis/The OGA Blogs from 2008-2014 and has written several travel articles for The Dallas Morning News. He began covering the Dallas Stars and Florida Panthers for The Hockey Writers in August 2015. Matt is also writing a biography of “Tex” Rickard, the Texas cowboy who founded the New York Rangers and the Madison Square Garden Corporation.