Seemingly with the flick of a light switch, the Flyers are able to transform from an undisciplined, group of five individuals to a team that has proven to be able to beat any opponent, on any given night.  These players earned the nickname of “Cardiac Kids” for a reason.  By January 18th, the Flyers had tied the team record for victories after trailing at some point in the third period.  They would go on to smash that record the rest of the season.  Their seven wins when they entered the third period down was fourth in the NHL.  Similar to those third periods, last night, the Flyers would not be denied.

In one of the most famous National Anthem/God Bless America renditions in the NHL, Lauren Hart was joined once again by Kate Smith before Game 6 at the Wells Fargo Center.  Entering the game, the Flyers had a record of 96-28-4 when Kate Smith sang.  That included an earlier Game 4 victory.  Strangely, the Flyers decided not to have Kate sing in Game 3.  The result?  They lost.  With Kate at their backs, and a raucous, orange-clad crowd waving jersey-towels, the team appeared prime for victory.

However, it was the Rangers that came out early and smashed the Flyers in the mouth.  They pinned the Flyers deep in their own zone, where the Flyers lack of mobility on defense, even with Erik Gustafsson subbing in for Hal Gill, was exposed.  The hard, two man forecheck was an all-too-familiar nightmare for the Flyers.  However, the brick wall in the Flyers’ net, doing his best Steve Mason impression, refused to allow anything past him, despite a number of point-blank opportunities for the Rangers.

After seeing their goaltender stand on his head, the rest of the team woke up.  After repeated struggles on the power play, the vaunted first unit cashed in.  Wayne Simmonds opened up shop in his office to the side of the crease, and put one past Lundqvist to give himself some needed confidence.  Earlier in the series, he had been largely ineffective offensively, and took a number of undisciplined penalties. 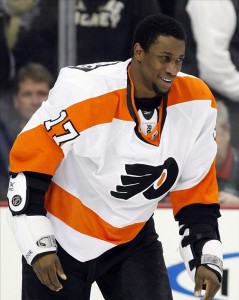 With that goal, you could see the confidence restored in the Flyers.  For the first time in the series, they looked like the faster, better puck possession team.  Craig Berube has preached puck support as the most important thing for the Flyers to do in order to win.  When they do it, and play as a cohesive five man unit, the results are spectacular.  When they don’t, they look like they did in Game 5.  Last night, the puck support was the best it has been all series.  When the team is confident, they make crisper passes and are able to make much stronger offensive zone entries that aren’t a one man show or an ineffective dump-and-chase.

The second period proved to be more of the same for the Flyers, as Simmonds potted two more goals to give himself the hat trick.  Just as important, Claude Giroux registered three points on the night, giving him 13 career points in 9 games where the Flyers were facing elimination.

The Flyers’ power play went 2/3 on the night, converting at a scorching 31.6% in the playoffs.  On the other hand, after starting 3/8 and essentially winning them Game 1, the Rangers’ power play has gone dormant, with zero goals in their last twenty attempts.

The only concerning part of the game for the Flyers was that they took their foot off the pedal in the third period.  When Cam Talbot replaced Henrik Lundqvist for the third, Talbot faced just six shots to Mason’s thirteen.  The game was safely in hand, so the two Rangers’ goals were nothing more than a statistical note.  However, it was a bit concerning to see the team leave Mason on an island again, like they had in the first.

Yes, the man many regard as the best in the NHL is being outplayed by a guy most teams wouldn’t touch with a ten foot pole last season.  Despite single-handedly carrying the team in the beginning of the year and strong play towards the end of the season, some saw Mason as a weak link.

Anyone that has watched the team consistently knows that the real weak link is the defense.  Mason is the one that makes the defense look good, not the other way around.  The fact that the Flyers have taken the series to Game 7 without truly testing Henrik Lundqvist shows that  really isn’t on his game.  The Flyers have tied for the fewest shots per game in the playoffs, averaging just 25.3.  Against a goalie like Lundqvist, normally, that would normally not be enough.  In the regular season, the Flyers fired 100 shots (33.3 per game) against Lundqvist, and he allowed just six get by.  This series, they fired 145 and 13 have gotten by.  His regular season save percentage against the Flyers was .940, and in the playoffs it’s .910.

Henrik’s GAA is a respectable 2.31.  However, Mason has been better.  His GAA is 1.95, and his save percentage of .939 is second only to Tuukka Rask among goalies that have played full games in the playoffs.  When you watch Mason this series, you can see the confidence oozing out of him.  He is aggressive when challenging shooters, and has been active in playing the puck to help break up the Rangers’ forecheck.  Last night, that confidence carried over to the forwards.