The Carolina Hurricanes are better than their record indicates. They have the top-tier talent, they have the goaltending, and thanks to some surprising developments from younger players this year, they have the depth. What they are missing is the steady presence of all three factors at one time. After starting the season 0-6-2, the Hurricanes have posted a 6-3-1 record in November. Certainly nothing to celebrate, but a step in the right direction. However, to continue this improved play, the Carolina Hurricanes will need to bring their “A” game on a more consistent basis.

Stumbling Out of the Gate

October was a poor month for the organization. After losing their second-line center, Jordan Staal, to injury in the preseason, the team seemed to pile up injury after injury to start the season off. Eric Staal suffered an upper-body injury in the second game of the season, Jeff Skinner was nailed with yet another concussion, and Andrej Sekera was “sore” after a scary collision with the endboards.

Add in injuries to depth players like Patrick Dwyer and Tim Gleason, it was no wonder Carolina struggled to generate wins. Riley Nash, who entered the season with the expectations to fight for a 3rd line center role, was suddenly on the first line. Rookie Victor Rask was right behind him. It was an adjustment for the team, both offensively and defensively.

To make matters worse, the goaltending was not nearly up to snuff. Cam Ward appeared to be heading to yet another season of disappointment, and Anton Khudobin looked like a shell of the young goaltender that saved the Hurricanes’ collective bacon last season. Of the eight games started between the two in October, only one game ended with a save percentage over .900 for a Carolina goaltender. The offensive numbers were expected to take a hit with the injuries to the Staal brothers, but no one was expecting the poor performance from the goaltending duo.

A New Month and a New Team

As the month changed from October to November, a new team appeared to take the ice. Confident, poised, and always in the game, even when things were not going right. The injured players returned to the lineup, and that certainly helped, but the attitude surrounding the team seemed to change as well. The Hurricanes began November by earning their first win of the season. Then their second, third, cumulating into a streak that saw the team earn 11 out of the first 12 points available in November. 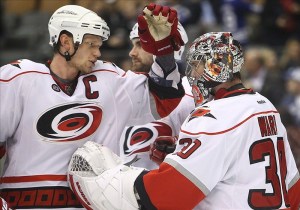 The biggest change has been the goaltending. Cam Ward earned the starters role after winning back-to-back games against Phoenix and Los Angeles to start the month, and he hasn’t looked back since. After posting a sub-.900 save percentage in October, Ward’s save percentage in November is a stellar .931. When asked about this stark change in play, Ward simply commented that he was “having fun again.” Anton Khudobin has been getting less starts since Ward took over as starter, but he too has looked much more comfortable in November in the few games he has played.

What may be most encouraging to see has been the play of Carolina’s top line players over the past two games. Though they were held scoreless against San Jose on Sunday, Carolina controlled the play from the opening puck drop, and Jeff Skinner and Eric Staal had numerous chances denied by the hot hand that afternoon, Troy Grosenick. Tuesday night, in Dallas, the puck finally began to fall for the top line. Jeff Skinner opened the scoring in the second period, and Eric Staal finished the game with two much-needed goals in the third period.

Consistency is the Key

The Dallas game may be a microcosm of Carolina’s season thus far. The Hurricanes were scored on early in the game, and fell behind 2-0 by the end of the first period. A four-goal second period allowed the Canes to control the play heading into the third, especially when Eric Staal added a goal just nine seconds into the period. However, Carolina’s inconsistency reared its ugly head again, and Dallas came storming back, turning what should have been a 5-2 game into a 6-4 nailbiter.

The pieces are all there for a successful team. The goaltending appears to have righted itself to allow the team a chance to win most nights. Depth scoring is what allowed the Canes to win five out of six games early in the month. With the top line’s performance in the past two games, they’ve shown they can win games on their own as well. If the three pieces can find themselves on the same page on most nights, the Carolina Hurricanes can put an ugly October behind them and possibly make a playoff push for the first time in years.