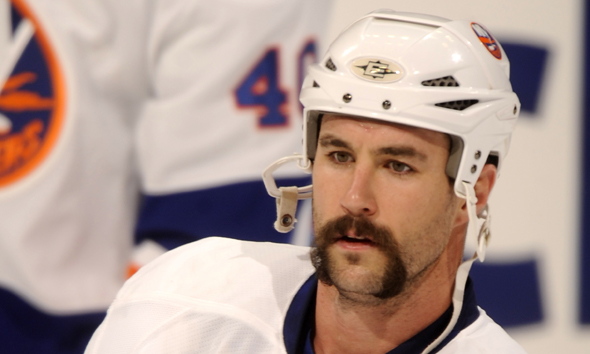 Upon his return to the lineup following a nine game suspension, one might assume that Trevor Gillies would be on his best behavior.

Surely he would not even think of repeating what he did to Pittsburgh Penguins forward Eric Tangradi, and certainly not in his first game back.

Of course, knowing now what actually transpired just 22 minutes into that game, such an assumption could not have been less accurate.

Gillies took down Minnesota Wild forward Cal Clutterbuck, and though the nature, location (on the body), and intentions of the hit were (and still are) unclear, the referee wasted no time sending the Isles’ enforcer to the dressing room, slapping him with a ten minute misconduct, and effectively ending his night and quite possibly his season.

I’m not defending Trevor Gillies’ actions, but I will say that I’m a bit shocked that he’s received so much notoriety, especially in comparison to similar types of players in the NHL (and there are quite a few of them).

While I understand that the NHL is working vigorously to put an end to head shots and concussions, I think it’s important for the league and its fans not to overly obsess the actions of one player. Trevor Gillies has only played a handful of games during his entire career. It is unlikely that he’ll even be on an NHL team next season, yet he is the one that Colin Campbell and the league have decided to designate as their example.

To me, that is beyond puzzling, because there are several others in the NHL that play a similar game as Gillies, but are being virtually ignored at the moment, and those players have tons more seasons under their belt and have committed far worse actions than Trevor has.

What about Matt Cooke? The man possibly ruined Marc Savard’s career, not to mention that he also tried to take out Alex Ovechkin by kneeing him, yet no one seems to be harping on him nearly as much as they have been with Gillies. And speaking of Cal Clutterbuck, Gillies’ “victim” the other night, he has lead the league in hits for the last two seasons, and he’s dished out more than his fair share of questionable body checks.

My p0int is, the NHL is not going to solve these issues by making a big deal out of Trevor Gillies and his “goonery.” Gillies will probably find himself on an AHL or ECHL roster next season, so he’ll be a real treat for whichever of those two leagues he plays in.

The NHL needs to spend more time focusing on those enforcers who are in the league to stay, and will therefore be problematic for them in the long-term unless the proper course of action is taken.

It’s time for the hockey world to move on, because there are larger issues to dwell on out there.