The Vegas Golden Knights had a memorable introduction to the NHL. Many doubted the team would have an impact in their debut year but they proved everyone wrong. With their strong team chemistry and even stronger combined talent, the Golden Knights reached the Stanley Cup Final in a season that many predicted they would end in the basement.

Here are 10 of the Golden Knights’ most memorable moments in a season that fans will never forget.

With a win in their NHL debut already under their belt, the Golden Knights moved on to face the Arizona Coyotes in their second game in franchise history. While a win in their first game was exciting, this game came down to the wire. Down 1-0 with less than 1:15 to go, Nate Schmidt scored the tying goal with the extra attacker to send the game into overtime.

Overtime was a showcase for Marc-Andre Fleury’s skill in net and the game ended with James Neal scoring the team’s first-ever overtime goal. The Golden Knights had now won their first two games on consecutive nights, a pretty good start for a team that was still expected to have a losing season. For fans, this showed them that the cornerstones of the team, Neal and Fleury, were playing as advertised and if those two were on top of their game it would only take a few more players to get the team rolling at full speed.

In the most emotional moment of the year, the team’s inaugural game took place only nine days after the devastating Las Vegas shooting that left 58 dead and 851 wounded. It was a tragedy that inspired the Golden Knights throughout the season and the team honored the victims and first responders in their pregame ceremony on opening night.

After a short but impactful speech during the opening ceremony by team captain and Vegas resident Deryk Engelland, the bond between the city and the team grew exponentially. The Golden Knights provided the city with something to cheer for all season long and if it wasn’t evident prior to Engelland’s speech, it was surely seen after how the City of Las Vegas embraced their new team. 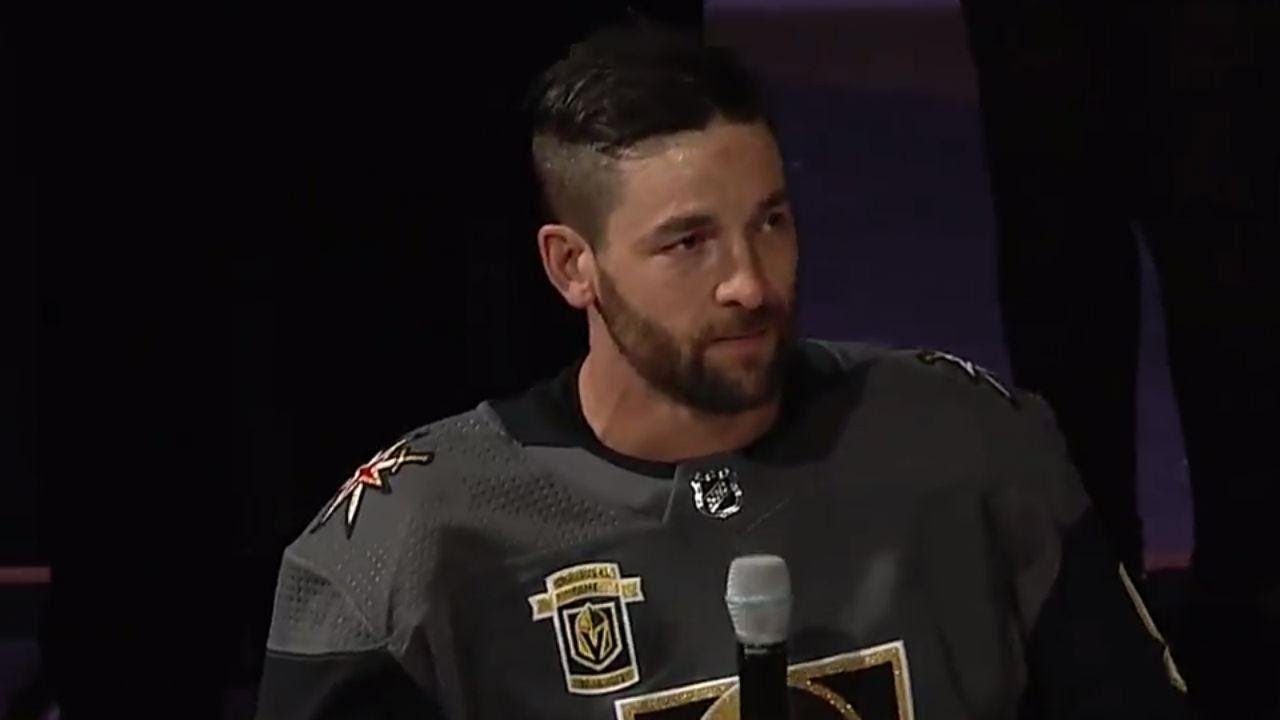 Jump ahead to a game that truly showed the will of the Golden Knights as a team. With every successful week, the assumption grew that the team would eventually crash down to earth. After all, how could a team of misfits sustain such a pace? This game in late January against the Flames proved that the Golden Knights did not know how to quit. After a series of goaltender injuries earlier in the year, in January the team was poised to make a splash in the Pacific Division.

Down 2-1 with only 1:50 left in the third period, Erik Haula capitalized on a turnover to slip one past Flames goalie Mike Smith to tie it at 2-2. Off the next faceoff, Vegas dominated play along the boards and got the puck to Jonathan Marchessault who deked past a defender and put the puck top shelf to give his team the lead. David Perron would cap off the win with an empty-netter to show the hockey world that the Knights would never give up the fight.

A major theme during the season was getting key performances from unlikely places. No one expected the breakout season of William Karlsson or for Erik Haula to score 29 goals, but the team found those diamonds in the rough. Ryan Carpenter was another example, after being picked up off waivers from the San Jose Sharks by McPhee on Dec. 13.

Related: Golden Knights Get a Passing Grade in Free Agency

When Carpenter arrived in Vegas he had a total of two goals in 28 NHL games with the Sharks. He proceeded to score nine goals in 20 games largely on the fourth line, including the game-winning goal against the Montreal Canadiens on Feb. 17. That was the moment fans of other teams began pulling their hair out. How could this team keep finding guys that all of the sudden were playing at a level they never had before? People around the league took notice of the team’s ability to work any player into the system.

The moment no one expected came on Mar. 26, when, with a 4-1 win against the Colorado Avalanche on home ice, the Knights clinched their first playoff berth. By this point, it was known the Golden Knights would make the playoffs, but to have that moment happen at T-Mobile Arena in front of their fans meant a lot for the team.

The win came thanks to the performances of players critical to the team’s success. Fleury had a phenomenal night, saving 28 of 29 shots while Karlsson and Marchessault each had three points. The Golden Knights had shown what they could do in the regular season and now they had a guaranteed shot at the Stanley Cup in their NHL season, something that hadn’t happened since 1980.

William Karlsson Scores the Goal of the Year

In a game with multiple memorable moments, it was Karlsson’s between-the-legs shot that dazzled the sports world. On Mar. 31, the Golden Knights defeated the Sharks 3-2 to clinch the Pacific Division. A great game all around, Karlsson’s short-handed goal that stood as the game-winner was also one of the best goals of the season.

This game was also memorable for the team, as they retired the number 58 in honor of the victims of the Vegas shooting. It was a welcome gesture from the Golden Knights that drew the city and team closer together.

Moving into the playoffs, many were still convinced that the Golden Knights would not make a dent, especially matched up against a proven playoff team like the Los Angeles Kings in Round 1. The Golden Knights swept the Kings as Fleury allowed only three goals in four games including a double-overtime thriller in Game 2.

Drew Doughty and the Kings were the Knights’ biggest detractors during the season. After the Golden Knights beat the Kings 3-2 in overtime on Dec. 28, Doughty was quoted as saying: “There’s no way they are going to be a better team than us by the end of the season.” Their playoff series win was the biggest reason the team had confidence moving forward, and it gave the fans a reason to believe the best was yet to come.

Going into Round 2, the Golden Knights did not want to show any signs of weakness and they smacked the Sharks 7-0 in the opening game. Seven different Golden Knights scored goals and eleven players posted at least one point.

Although the Sharks put up more of a fight than the Kings had, the Golden Knights still managed to win the series 4-2 and head off to the Conference Finals. The blowout proved that the Golden Knights were not messing around and no matter what team they were going to face, there would be a fierce battle.

After all of these moments, the Golden Knights were still picked to lose their Conference Final series against the Winnipeg Jets. But they were used to being underestimated and brought the Jets to the brink with a 3-1 series lead. Tied 1-1 after the first period in Game 5, the Golden Knights needed a hero. Who would step up? Ryan Reaves, a player with only 31 goals in 498 career games.

The Golden Knights were scrutinized when they acquired Reaves from the Pittsburgh Penguins at the trade deadline. For a team with a talented roster, Reaves was not expected to be able to crack the lineup but found a spot on the fourth line during the series against the Jets. To reward this decision, Reaves scored the series-winning goal during the second period and sent his team to the Stanley Cup Final.

Looking back, this moment is bittersweet as the team lost the Cup to the Washington Capitals, but this win in front of their home crowd in Vegas is one of the most memorable moments of the season. It was a back-and-forth battle that saw the Golden Knights score three straight goals in the third period to steal a win in Game 1.

Unfortunately, the Golden Knights couldn’t win the ultimate prize but for at least one day there was a celebration in Vegas. The team and the fans had the taste of victory after seeing Tomas Nosek score the empty netter to win Game 1, and they will not rest until they get back to the Stanley Cup Final next season.

Never before has a first-year expansion team been so successful. These moments from a fantastic season will be remembered in Vegas for seasons to come. Next season, the Golden Knights hope to add to these memories but for now, Vegas can look back on these moments and know that they will last a lifetime.