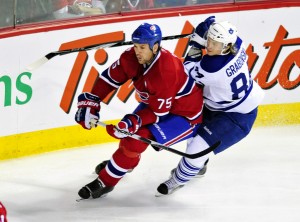 Reading through the comments section of a particularly popular sports website yesterday, I couldn’t help but be taken aback by the pure nastiness of some of the site’s commenters. As I dug a little deeper, it became apparent that fans of a select few franchises were pulling away from the crowd in terms of the genuine contempt they seem to feel toward their fellow sports fans.

Among the worst violators of good taste, I am regretful to announce, were the supporters of two of Canada’s most storied institutions; the Toronto Maple Leafs and the Montreal Canadiens.

In the world of professional sport, there are more than a few heated rivalries. The Yankees and Red Sox obviously come to mind, as do the Lakers and Celtics. Even the two NHL clubs in question have managed to develop and harbour permanent ill-will towards other teams in the league. The battle of Ontario has become a regular fan-favourite, and in Montreal, you can’t even order a Boston cream donut without receiving some nasty glares in the process.

But nothing compares to hockey’s original feud, the traditional clash of Canadian culture; Toronto versus Montreal.

Statements like, “Montreal fans are nothing but arrogant blow-hards who are just looking for an excuse to riot,” and “the average Leafs fan is just another contented loser…” are not only increasing in frequency, but in many outlets, have become the new normal.

To be perfectly frank, it’s disgusting.

I am of the opinion that rivalries exist purely to enhance the experience of watching the game, but it seems as if many people in the sporting community have now put the cart before the horse, and seem to genuinely believe that the games are played solely for the enhancement of the rivalry.

There was once a school of thought that asked, “There is a hockey game being played… how can we get people more excited about watching it?”

But now, it seems as if that reasoning has reversed itself. We are instead asking, “Since these two cities hate each other, how can we display that hatred by means of a hockey game?”

At first, I chalked it up to the natural evolution of a rivalry. Nature dictates that when something ceases to grow, it begins to die…so obviously rivalries will either become increasingly heated as time passes, or they will fizzle out completely. Given the full century these two teams have had to build their discontent, surely this would explain the growing personal tensions between their fans.

But this was not the natural growth of a rivalry. People do not simply dislike the opposing team more than they used to. Instead, this was a complete shift away from team-based biases and towards human-based biases. We have actually begun to judge each other’s character based on the hockey teams we choose to follow.

If it is not a natural evolution, I thought, it must surely be the relative lack of success experienced by each of these franchises over the past several decades. After all, we are talking about the two winningest teams in hockey history, and they have but one Stanley Cup between them in the past twenty-five years. Surely the frustration level of these two cities has begun to boil over, leading to the irrational pointing of fingers that often accompanies failure.

But again, these teams have faced the same challenges since the late 1980s. Neither has been particularly successful, save for a miracle playoff run here and there. So why would the frustration just start to boil over now?

Then I remembered the culture clash. Of course! The source of this new-found prejudice has to be the constant tension between Canada’s two official language groups. Montreal, of course, is representative of a French-Canadian culture which considers itself threatened by the very existence of its powerful Anglophone neighbours. And Toronto, often mocked as ‘the centre of the universe’ by outsiders, couldn’t be a more perfect representation of everything French-Canadians fear most about a dominant English-speaking culture.

Of course, I then immediately remembered why I decided that the situation could not be blamed on each team’s lack of recent success…there have been no new occurrences which might lead to the rekindling of old flames. After living side by side for all of these years, was it really possible that two otherwise tolerant cultures just got sick of putting up with each other and decided to use sports websites as the outlet through which they vocalized their contempt?

Sure, there are some hard feelings on both sides of the fence, but honestly…it seemed doubtful.

So what is it that has changed? Why have so many sports fans begun to accept personal insults and degradations as a normal way of expressing what was once called ‘team spirit’? Why do we believe that supporting our team now includes a responsibility to personally insult the followers of other teams?

As is so often the case, the real answer is the simplest:

Because it is what we chose.

The scope and breadth of the internet have allowed many people to speak without fear of consequence for the first time. Hiding behind a screen name and an avatar, we no longer have to look another human being in the eye while we insult them. Instead of accountability and ownership of one’s actions, the internet allows for ignorance and cowardice to reign supreme.

We became drunk on our own power, and chose to push the envelope as far as we possibly could. Hiding behind the guise of anonymity, a select few began to hurl slings and arrows, and once insulted, it didn’t take long for the masses to join in.

It is sad that what was once a vibrant, healthy rivalry has begun to show signs of a slow decline into prejudice, but it is not too late to stop it.

I may never cheer for a Leafs’ goal, but I also promise to never take a personal stab at someone because of their favourite team. You will never catch me wearing blue and white, but I’ll gladly hold the door open for someone who is. Yes, I will laugh at your misfortune, but only when it occurs on the ice (an occurrence which, for both teams, is all too frequent these days anyway).

So to all of you Toronto fans out there, I would like to extend the olive branch on behalf of the ninety-eight percent of Canadiens fans who do not, in fact, hate you personally. If you ever find yourself in Montreal, look me up. I’ll put on my Lafleur jersey, you put on your Gilmour jersey, and we’ll go grab a beer and argue about hockey like a couple of grown-ups.

4 thoughts on “Has the Internet Caused NHL Rivalries to Go Too Far?”