One of the best rivalries in the National Hockey League resumes Thursday when the New York Islanders face the New York Rangers in Round One of the Battle of New York for the 2017-18 season.

Both teams have gotten off to sluggish starts this season. The Islanders are 2-3-1 for five points and are coming off a California trip that saw them sandwich 3-2 losses to the Anaheim Ducks and Los Angeles Kings around a 3-1 win over the San Jose Sharks. Their power play has been powerless, going 0 for 20 in their first six games and surrendering three shorthanded goals.

Meanwhile, the Rangers are 1-5-1 for three points. It is the second time in franchise history they have fewer than four points in their first seven games; the 1959-60 team started 1-6. They have surrendered 26 goals, fourth-most in the league. In their last game, a 5-4 loss to the Pittsburgh Penguins, they allowed the tying goal with 55.3 seconds left in regulation and gave up the winning goal 58 seconds into overtime.

A victory over their rival, though, could provide the spark either team needs to snap out of their early-season funk. 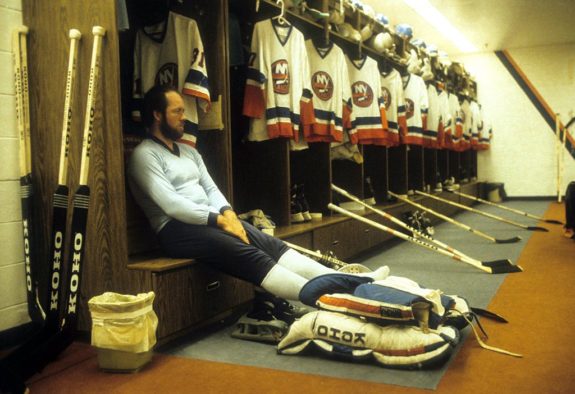 Goalie “Battlin'” Billy Smith made 31 saves and fought Rod Gilbert in the first game between the Islanders and Rangers in 1972. (Photo by B Bennett/Getty Images)

Over the years, the rivalry between the Islanders and Rangers has been well-chronicled by many. But as the Battle of New York is set to begin its 45th year, let’s take a look back at how it all began.

The first time these two teams met in the regular season was October 21, 1972, at Nassau Coliseum. It was the fifth game in Islanders history. According to the game story in Newsday, it was the first time two New York teams met in an NHL regular-season game since March 3, 1942, when the Rangers and Americans skated to a 4-4 tie at the old Madison Square Garden.

This was the game where Islanders goalie Billy Smith truly earned his nickname “Battlin’ Billy,” fighting the Rangers’ Rod Gilbert early in the second period.

Smith made 31 saves, but the Rangers still won, 2-1. Vic Hadfield and Craig Cameron traded goals in the second period before Bobby Rousseau scored the game-winner at 7:05 of the third period.

That was the first of six meetings between the teams during the 1972-73 season. The Rangers won all six, outscoring the Islanders, 25-5. 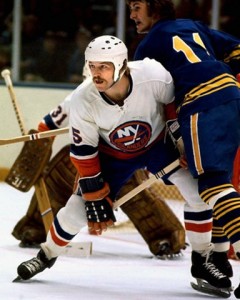 To begin the 1973-74 campaign, the Islanders started off 0-3-4. But on October 27, 1973, they not only got their first win of the season but their first win over the Rangers, 3-2. Rookie defenseman Denis Potvin beat Rangers goalie Eddie Giacomin in the first period for his first NHL goal, then scored the eventual game-winning goal late in the second period.

Still, in the remaining four games that season, the Rangers won all four.

The Rivalry Heats Up

In their second meeting of the 1974-75 season, on October 30, 1974, the Islanders rallied for a 1-1 tie at Madison Square Garden. Brad Park had scored early in the third period, but Bobby Nystrom scored with 2:39 remaining to earn the Islanders their first road point against the Rangers. And the Rangers took notice. Forward Ted Irvine told Newsday, “Last season or the year before, the Islanders probably would have quit. But they’re a different team now. They kept skating up and down the ice, looking for a break.”

Added Rangers coach Emile Francis: “This is going to be a great rivalry. It’s going to be great for the game.”

The Rangers took the next two meetings that season by identical 5-3 scores. But March 29 at Nassau Coliseum, the Islanders won, 6-4. Eight days later, in the regular-season finale at Madison Square Garden, they won again, 6-4. Ralph Stewart, Bob Nystrom, Jude Drouin, Jean Potvin, Clark Gillies and Ed Westfall scored for the Islanders as they won for the first time at MSG.

Of course, that set up the first-round best-of-three playoff series between the teams. After splitting the first two games — each winning on the other’s home ice — the Islanders stunned the Rangers on J.P. Parise’s goal 11 seconds into overtime to win Game Three, 4-3, and the series, 2-1.

Heading into Thursday’s game, the Islanders have 118 wins, 119 losses, 19 ties and six overtime losses against the Rangers. However, in the past two seasons, the Islanders are 7-1 against their Broadway counterparts.

Other meetings this season between the teams are Jan. 13 at Madison Square Garden and Feb. 15 and April 5 at Brooklyn’s Barclays Center.