Skip to content
I have not failed. I’ve just found 10,000 ways that won’t work — Thomas Edison

The 2014-15 edition of the Los Angeles Kings may not have struck out 10,000 times like Mr. Light Bulb, but speaking for frustrated Kings fans everywhere, it sure seemed that way. The team’s struggles were particularly noteworthy after the first 60 minutes of play, when Dr. Jekyll suddenly morphed into Mr. Hyde. The net result was an incredible fifteen losses out of seventeen tries during overtime or the shootout, illustrating the single biggest reason why the team missed the playoffs this year.

No matter how you slice it, one fact remains without dispute: they fell short just enough to not get invited to the dance for the first time in six years.

What happened? What went wrong?

I explored the reasons in this piece last month. Simply put, the Slava Voynov suspension, the decline of Mike Richards, overtime/shootout struggles and other key factors led to their demise. We don’t have to be rocket surgeons to figure it out.

So how did the individual players perform this past season? Certainly there were highlights — Tyler Toffoli’s and Jake Muzzin’s breakout campaigns, just to name two — but the disappointments clearly outweighed the positives. There may not have been 10,000 failures, but as is customary with teams that miss the playoffs, there were more than enough disappointing performances to go around.

In the interests of space, we’ll break the analysis up into three parts over the next week: centers, wingers and defensemen/goaltenders. First up: the centers.

Widely recognized as one of the top centers in the NHL, Anze Kopitar has it all: size (6’3″, 225), good speed, great hands, a solid wrist shot and fantastic hockey sense. He’s also a finalist for the Selke and the Lady Byng trophies.

The following is a compilation of Kopitar highlights this past season:

With all the accolades and in the wake of the pulse-pounding video, what kind of year did he really have?

Most Kings fans expected more from Kopitar this season. His number of goals (16) was the lowest of his career, and his number of points (64) was the second-fewest he’d ever posted in a full campaign. His iCorsi dropped to 178, easily the worst total of his career. He was also almost comically poor in the shootout.

Perhaps the most frustrating aspect of Kopitar’s game was his shots. More specifically, the lack of them.

What wasn’t expected was the mere 134 he had in 2014-15, 66 fewer than the still-low 200 he recorded the year prior. It’s pretty obvious why he ended up with just 16 goals, and for an already offensively challenged team, that’s nowhere nearly enough.

When considering the entire package, Kopitar remains one of the best centers in the league, and one down year offensively doesn’t make a trend. On the other hand, he’ll turn 28 before the new season begins and he wouldn’t be the first player to see his production decline at that age. Will he bounce back? For the Kings to return to the playoffs next season, he’ll need to.

Jeff Carter may never again approach 50 goals like he did with the Flyers in 2008-09, but he’s still a pure goal scorer and arguably the most dangerous offensive threat the Kings possess. Like Kopitar, he’s also got size (6’4″, 199) and speed, but his shot is on another level altogether. He’s also comfortable playing both center and wing.

Check out this awesome 2-1 with Carter and Tyler Toffoli against the Oilers in March:

Carter put up 62 points (28 goals, 34 assists), pretty remarkable numbers considering the Kings’ offensive challenges and the fact that he was generally centering the second line. His iCorsi was 300, 27th best in the league.

All in all, Jeff Carter had a very good season for Los Angeles this year.

Trevor Lewis is one of those hardworking, under-the-radar types every championship-caliber team needs. He’s unlikely to ever put up big numbers (his 9 goals and 16 assists were career highs), but he was +8, played extensively on the penalty kill and even blocked 19 shots. His iCorsi was ninth best on the team, higher than Anze Kopitar’s.

A really good interview with Lewis can be seen here: 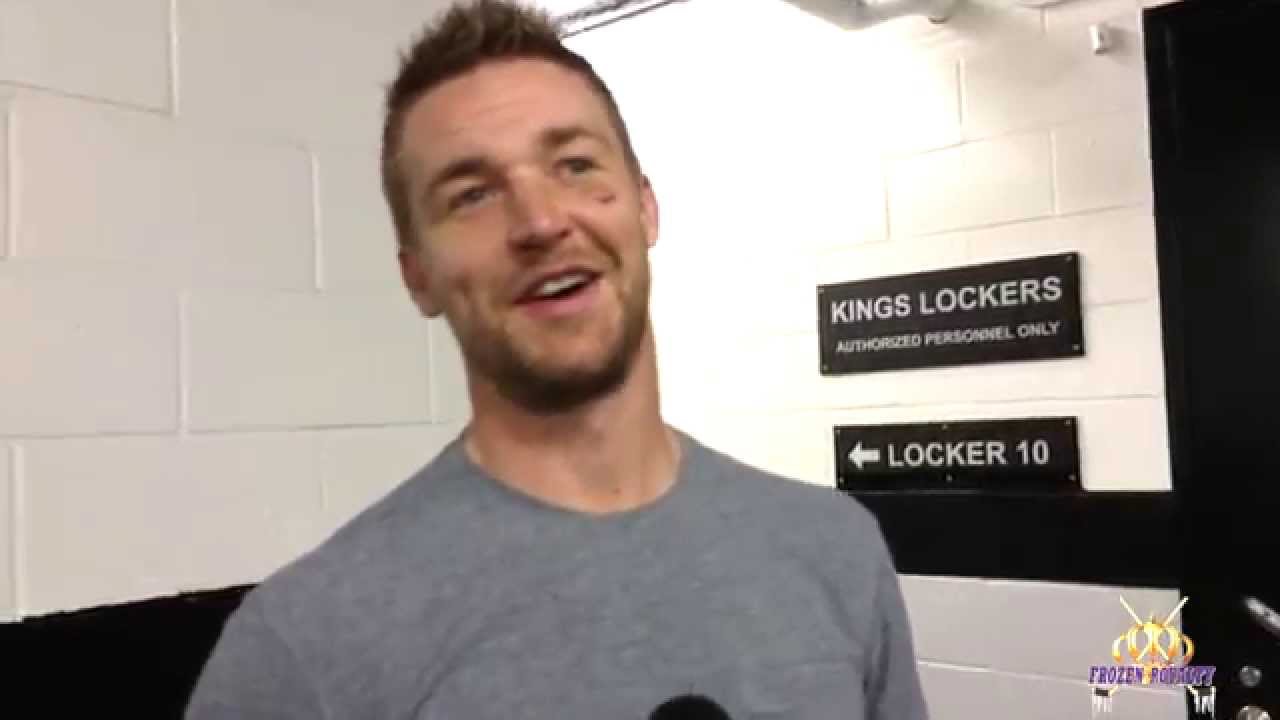 Although he tends to fly underneath the radar, Lewis does whatever he’s asked and is a big part of the Kings’ identity. His season in 2014-15 has to be considered a successful one.

I wasn’t sure how to dissect Richards’ season until I got to this point, and quite frankly, I’m still not. It’s a story that has been well-chronicled, perhaps overly so.

A TSN report of Richards’ shocking placement on waivers last January can be seen here:

In short, whether it be due to previous concussions, poor offseason training habits, Father Time or a combination of the three, it’s clear Mike Richards is a shadow of his former self. A former 4-time 60+ point producer, Richards struggled to reach just 16 in 2014-15 and has yet to surpass a high of 44 in four seasons with L.A. His iCorsi (101) was predictably weak, even when accounting for minutes played.

Dean Lombardi should have used a compliance buyout on him last summer and will likely bite the bullet and buy him out this time around.

Stoll was almost certain to not return in 2015-16 after a year in which his offensive decline (6 goals, 11 assists in 73 games) reach new lows, and that was before his arrest for suspicion of cocaine and Ecstasy possession a month ago. Now, it’s a virtual certainty.

He’s had a solid career and will forever be known as one of the great faceoff men of his era, but Stoll will be 33 before next season begins. On the heels of Slava Voynov’s legal troubles, the Kings can’t afford him — literally and metaphorically.

Stoll was victimized by Kari Lehtonen in this clip:

Good luck, Jarret. Despite your recent struggles on and off the ice, we’ll always have the memories.

A third-round selection (#82) in the 2011 NHL draft, the 22-year old Shore had his first cup of coffee in the NHL this past season, scoring seven points (1 goal, 6 assists) in 34 games. He was a point-per-game producer for the Manchester Monarchs prior to his call-up, so there’s the promise of better things to come. 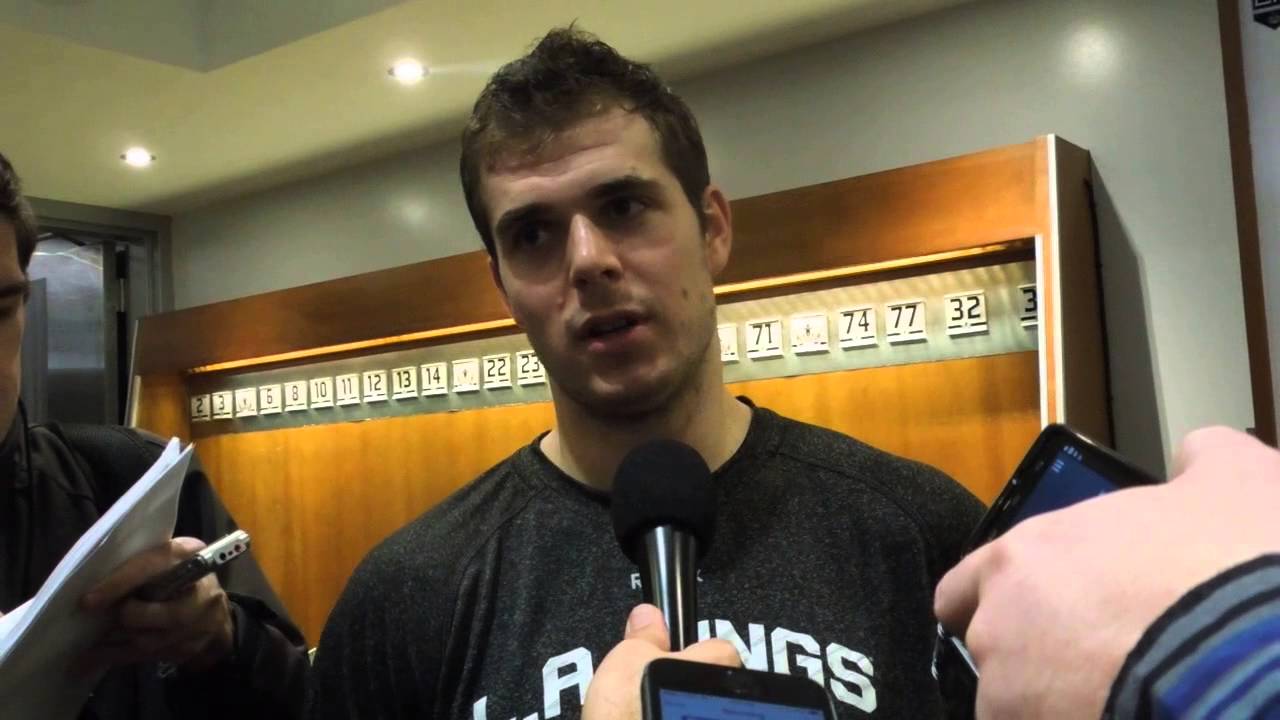 Given the limited time with the team and fourth-line minutes, it isn’t fair to assign a grade to Shore just yet. There’s a good chance we’ll be seeing much more of him next year.

In a few days, I’ll be reviewing the rest of the forwards. Some are listed as centers, but they played mostly at wing for the Kings last season.

Do you agree or disagree with anything you’ve read? Leave your thoughts below, or send a message to @McLaughlinWalt.