Marc-Andre Fleury signed a four-year contract extension with the Pittsburgh Penguins last week with an AAV of $5.75 million. Fleury’s deal got a lot of criticism because of its length and size compared to where he actually ranks among goalies statistically over the last handful of years.

The problem with these criticisms, which are completely valid — the term and price tag are a little large for a player who isn’t a top goaltender, is that the question isn’t how you get an elite goaltender on your roster since a guy like Henrik Lundqvist simply isn’t available, but how you improve your team in the given situation. And the situation is that Fleury was to be the most experienced goaltender hitting a thin free agent market in summer 2015.

The Penguins options were limited. They weren’t without options, but Penguins GM Jim Rutherford made a calculated risk by keeping a known and tested quantity close, happy, and even keeled (which shouldn’t matter, but the psychological arguments with Fleury are an annual discussion).

However, the term and pricetag (especially if the salary cap isn’t going up) mean that Pittsburgh will likely be without an elite goaltending option for the next five seasons — which may take them through the prime of Sidney Crosby (32-years old the season after the Fleury contract expires) and Evgeni Malkin (will be 33).

Let’s look at what the options actually were and how Fleury and his contract situate themselves among those options.

Money, So They Say

In a perfect world, one where teams don’t make mistakes on long-term contracts with guys like Ilya Bryzgalov, Cam Ward (another underperforming goaltender who has won a Cup), Rick DiPietro, et al, the 30 goaltenders who make the most would be the 30 starting goaltenders in the NHL. That’s not the case, because you’ve got guys like Niklas Backstrom making $4 million despite being supplanted by young netminder Darcy Kuemper. Other teams have two guys who land in the top 30, like the Leafs with James Reimer and Jonathan Bernier landing near the bottom of the list.

Fleury’s contract falls in the middle of that list. With the rising cap — an excuse many used to justify how much Fleury will make and a big assumption, as we’re seeing with the possibility of the cap not going up this summer — you can expect him to fall down the list a bit by the time his fourth year is up. He may fall down the list some by the time next season starts even, with Sergei Bobrovsky being a restricted free agent and Jonathan Bernier due a raise.

In the end, the cap hit for Fleury (which is the same as his actual salary next year and this year), is about what an average starting goaltender in the NHL makes. It seems high when heard in a vacuum or compared to a skater contract, but Fleury’s contract isn’t among the biggest goaltender contracts in the league.

I said I’d love to see that number be lower, but you can bet that Rutherford felt that way too. His contract might be a little large, but that’s more a product of the cap than anything. Fleury would have gotten more than that if he hit free agency, despite ranking in the lower portion of that grouping statistically.

Here are those 30 goaltenders mapped with stats since the 2008-09 season. (Though I removed Viktor Fasth because he was so far into the lower left that he was making the chart smaller and harder to read.) 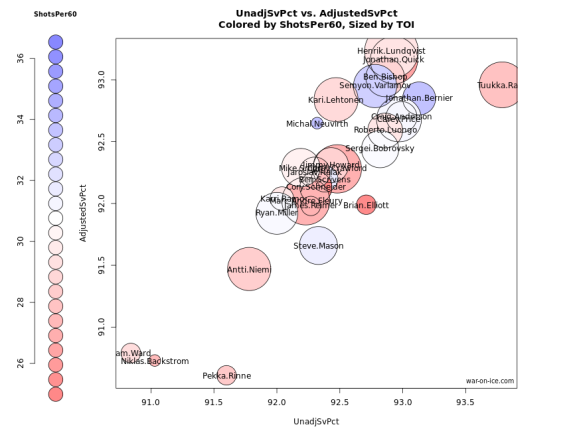 The big question for me isn’t Where does Fleury sit among active goaltenders — though those are a set of stats that aren’t pretty — but, rather, where does he sit among goaltenders who are a plausible option for the Penguins.

They could have done something to avoid this situation, but this is where they are. They’re into the 2014-15 season with a starting goaltender in a contract year. Fleury’s probably the best highest profile goaltender with the potential to hit free agency in July. Or he’s in the top two, with the other big option being Antti Niemi, who seems unlikely to get a new contract in San Jose.

So who else is available? Not too many starters. Fleury has played the most games of any of the UFAs. The only options who have played more than 200 games are Evgeni Nabokov, Peter Budaj, Dan Ellis, and Antti Niemi. Above 100 games there’s Devan Dubnyk, Michal Neuvirth, Jonas Gustavsson, Ray Emery, Josh Harding, and Jason LaBarbera. The rest of the class includes Curtis McElhinney, Anders Lindback, Jhonas Enroth, Karri Ramo, Thomas Greiss, Viktor Fasth, and Cam Talbot. 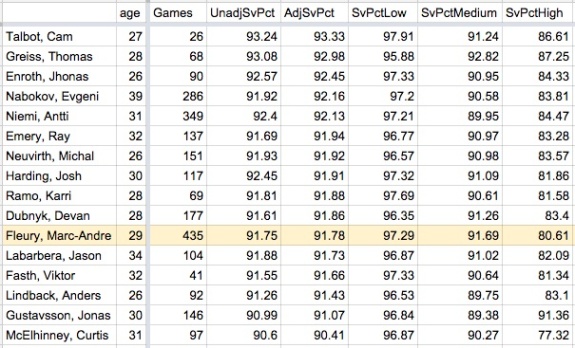 The free agent group isn’t very exciting, but it’s notable that Fleury falls in the middle here in most categories, with the exception of save percentage on high-percentage shots where he’s second to last. Side note on that: Odd that he falls to the bottom of the list in that one category when he’s the right in the middle for the most part. Seems problematic to be weaker in the high percentage areas. That would seem like a space where a goaltender can sway the momentum of a game. Though that might be more perception than fact.

There are players stastically above Fleury in a smaller sample size, but the team might be apprehensive to hand a guy like Jhonas Enroth the keys to the car when he’s relatively untested and the team is a competitor right now.

Pittsburgh has shown — and I think is right to — a preference toward having one goaltender with lots of experience on the roster, someone who is a bit of a proven commodity, whose career trajectory has a large enough sample size that you have a pretty good idea what to expect. If that’s the direction the team is going, do you honestly want Dan Ellis, Peter Budaj, or Evgeni Nabokov over Marc-Andre Fleury? I don’t. That just leaves Niemi.

Niemi (33) is older than Fleury (29), but might have made sense on a short-term deal if the Penguins had a young goaltender they believed would be a starter in a year or two. Not to mention they’d be rolling the dice hoping that Niemi is even interested. The bigger problem is that the Penguins haven’t had that young goaltender with starting potential in the system for years and maybe current back-up Thomas Greiss could be that guy, but he’s only one year younger than Fleury and, if he performs well this season, might be looking for a contract with more ice time this summer when his contract is up.

Greiss has played 471 fewer career games than Fleury (not counting Fleury’s 93 playoff games). The save percentage between the two is significant, but if you give Greiss a full workload, something he’s never had at the NHL level — his 25 games last season were a career-high and he hit that number not on performance but on injury to Mike Smith even though he did post career best Sv% and GAA numbers — and increase his sample size, does he regress toward Fleury’s numbers? That’s a big roll of the dice now when you’ve got Fleury eating up that kind of salary and term.

At four years, $5.75M, the contract blocks the way for any younger, less experienced goalie to take the reins. Just ask Anton Khudobin. (Chart features stats since the start of the 2011-12 season.) 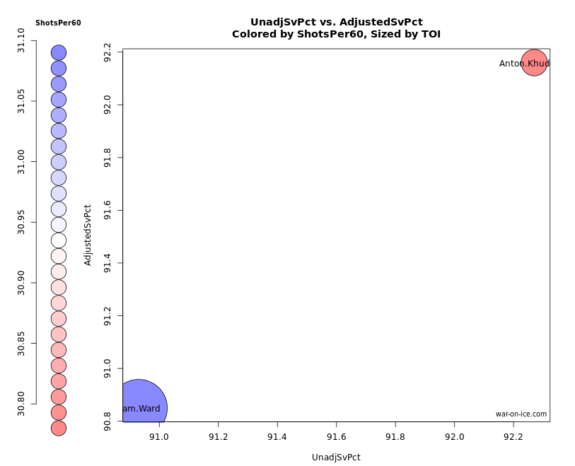 If experience wasn’t an issue and you’re just looking at the stats you can get a pretty good visualization of where Fleury sits among potential UFAs here. (via War on Ice) 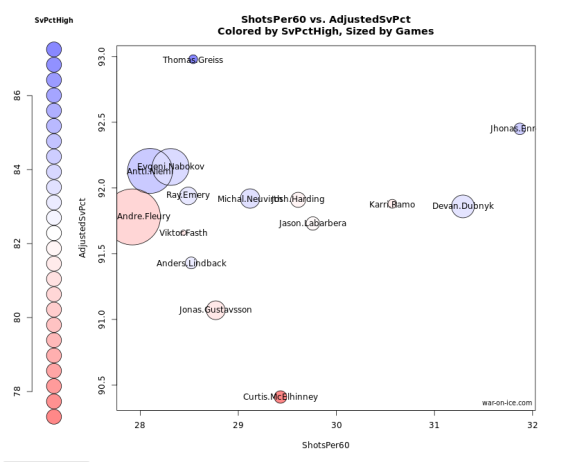 Fleury sits in the middle to lower-middle of that group and is facing fewer shots/60 than most, but lack of experience and lack of a back-up plan without Fleury make that a high risk decision for Rutherford. At this sample size, you know what you’re getting from Fleury, while most of the others could change wildly under a heavier workload. Taking a risk and having it fail with two superstars in their prime would be a major mis-step.

Of course, you could try to make a trade too, where Pittsburgh could maybe get a goalie who is statistically better. However, the step up is likely to be small since teams with a Tuukka Rask aren’t sellers. Importantly, you’re giving something up to make that happen, which increases the cost of that small improvement to the team overall.

The arguments about where Fleury stands overall in the league are very valid. There’s a good argument that his postseason performances have stood in the way of the Penguins being a dynasty. He’s overpaid (though that’s a long list of players) and that contract would probably benefit the Pens more if it was shorter. But the problem for the team has been poor planning. The expiration of his contract isn’t a surprise and the Penguins don’t have another option in the system.

The problem that led to a less-than-stellar contract and that less-than-stellar contract being the best option was the Ray Shero regime hamstrung Rutherford’s management team by not drafting and developing young goaltenders who could take the reins. Greiss is the first back-up the team has had that could plausibly take on more minutes with the intention of seeing if he could become a starter — though, as I mentioned, he’s not exactly a young player.

Other recent Pittsburgh back-ups who have gotten ice time? Tomas Vokoun, Brent Johnson, Dany Sabourin, Brad Thiessen, Mathieu Garon, Jeff Zatkoff, and John Curry. It’s not exactly a who’s who of potential NHL starters. (Side note: That pretty sub-par list of back-ups has routinely performed better than Fleury, which is should have been a red flag for the team long ago.)

Rutherford could have waited, could have done something bold to try and take a big step forward in net, but that could also be a huge mistake. Fleury’s contract is safe and not totally unwarranted, if underwhelming and the result of a lack of organizational depth. Yet the team would benefit from finding a young goaltender to groom who could take the reins in the near future and not letting the Fleury contract stand in the way of change.

2 thoughts on “Lack Of Options Made Fleury Contract Best Option”